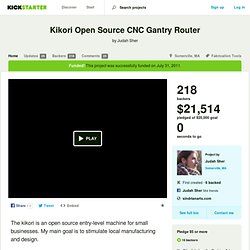 The Kikori is a 4’x8’ open source CNC gantry router designed to be a solid, adaptable, entry-level machine for small businesses. It is made out of Medium Density Overlay board, or MDO, which unlike MDF is both very strong and highly resistant to swelling due to moisture. It’s essentially a robot capable of milling complex three-dimensional shapes out of wood, soft metals, and plastics.

If you'd like to read more about what CNC technology is and why I love it, read this. The goal of this project is to refine the Kikori design as well as design a line of open source CNC machines to complement it. As an industrial design student I’ve been exploring the potential of CNC technology for years. My design requirements for the Kikori were as follows: It must be able to make its own parts (self-replicate)It must have a milling area of at least 4’x8’x6”It must be very rigid to maximize speed and accuracyIt must cost under $5,000 to build Be sure to check back here often! 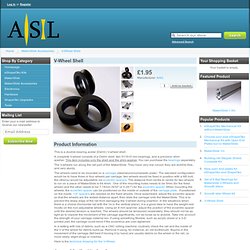 A complete V-wheel consists of a Delrin shell, two 5×16×5 mm bearings, and a precision shim washer. This item includes only the shell and the shim washer. You can purchase the bearings separately. The V-wheels run along the rail part of the MakerSlide. They have very low runout: they are wobble-free, and very sturdy. The wheels need to be mounted on a carriage (steel/aluminium/plastic plate). In a setting with lots of debris, such as a CNC milling machine, routinely check the rail and the inside of the V of the wheel for debris build-up. Tilt printer - 3D printer list. Zobacz temat - Zewnętrzny GPS (COM port) MTM Snap. Build your own DIY CNC Milling Machine. CNC Machine Built Around Arduino. Using mostly off the shelve parts, this project aims to build a homemade CNC machine known as Valkyrie Reloaded. 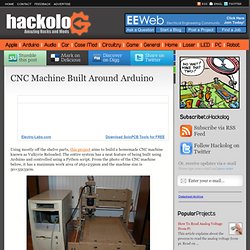 The entire system has a neat feature of being built using Arduino and controlled using a Python script. From the photo of the CNC machine below, it has a maximum work area of 265×255mm and the machine size is 50×35x35cm. A 16mm MDF is the main material used in the project along with the 10×20mm aluminum corner rails and 40 bearings.

The standard 3 meter M8 type threads are used for the lead screws and for fixing the rails, M6 screws are used. The motors that are usually found in almost all older printers were used as they feature 7.5 degrees per step, 24 Volts, and can stack stepper motors. The single-sided Arduino is the brain of the machine and the ATtiny2313 is paired with a 1298 to create the motor drivers. Incredible $100 Arduino-Based CNC Machine. CNC machines allow you to mill just about any shape or design you’d like using X, Y and Z axis.Â Typcailly they cost serveral thousand dollars, but this man built his own CNC machine and wrote up a tutorial on how you can build it yourself.Â Typically CNC’s use lead screws which create linear motion using a motor and a threaded rod.Â Another neat feature is that the entire system is build using Arduino and controlled via a Python script.Â A similar build is pictured below: 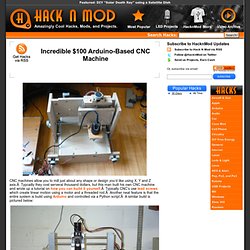 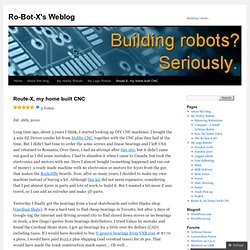 Long time ago, about 5 years I think, I started looking up DIY CNC machines. I bought the 4 axis EZ Driver combo kit from Hobby CNC, together with the CNC plan they had at the time. But I didn’t had time to order the acme screws and linear bearings and I left USA and returned to Romania. Over there, I had an attempt after this site, but it didn’t came out good as I did some mistakes. I had to abandon it when I came to Canada, but took the electronics and motors with me. Yesterday I finally got the bearings from a local skateboards and roller blades shop (Cardinal Skate). I got a 2′x4′ 3/4″ MDF board at Home Depot and I had it cut in several 24″ long pieces: one piece 17″ wide for the table, 3 pieces 6″ wide for the sides, 2 pieces 4″ wide for the Y and Z axes and 2 pieces 2″ wide for… I don’t remember what they were for. So I got pretty much everything I need, except the routing bit. Jul. 17, 2010. A few pictures: Here are some more pictures: Jul. 18, 2010. Jul. 22, 2010.