Etching PCBs With A 3D Printer. There are dozens of circuit board printers out there that lay down traces of conductive ink and ask you to glue down components to a fragile circuit board. 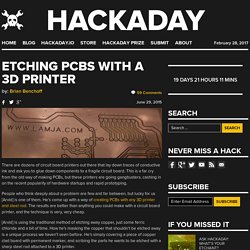 This is a far cry from the old way of making PCBs, but these printers are going gangbusters, cashing in on the recent popularity of hardware startups and rapid prototyping. People who think deeply about a problem are few and far between, but lucky for us [Arvid] is one of them. Good Penmanship With A 3D Printer. [Chris Mitchell] was going to make his own plotter for doing cursive writing for cards but realized he might be able to use his 3D printer to do the writing instead. 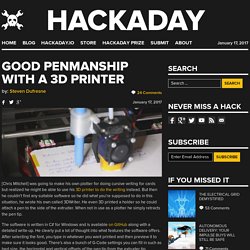 But then he couldn’t find any suitable software so he did what you’re supposed to do in this situation, he wrote his own called 3DWriter. He even 3D printed a holder so he could attach a pen to the side of the extruder. When not in use as a plotter he simply retracts the pen tip. The software is written in C# for Windows and is available on GitHub along with a detailed write-up.

He clearly put a lot of thought into what features the software offers. The code itself is quite clean and easy to understand. Building a Prusa i3 3D Printer - All. Parts list: Frame - laser cut 6mm Baltic birch plywood. 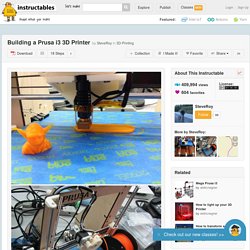 Building a Prusa i3 3D Printer - revisited - All. Parts List: Frame - for this build we used a CNC'd aluminum frame from one of the Hackspace members. 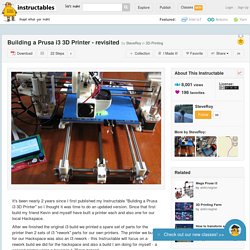 We did not need to use braces like we do when using a plywood frame. Don't use an acrylic frame, from helping others who have had acrylic frame kits I don't think they are rigid enough especially the bed. See the alu-frame.dxf file in this step. We have built "rework" i3's with plywood frames using braces and they work well. Printed Plastic Parts - we used some of the parts from the Prusa i3 Rework by eMotion. Home - Marlin 3D Printer Firmware. Marlin firmware user guide for beginners. Starting with Marlin Firmware If you built your own 3D printer or if you want to optimize its performance, you will have to put your hands in the firmware. 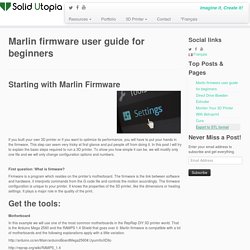 This step can seem very tricky at first glance and put people off from doing it. In this post I will try to explain the basic steps required to run a 3D printer. To show you how simple it can be, we will modify only one file and we will only change configuration options and numbers. [SINTRON] 3D Printer Kossel Mini Electronic Full Kit w/ Bowden MK8 Extruder MK3. Shipping to: Worldwide. 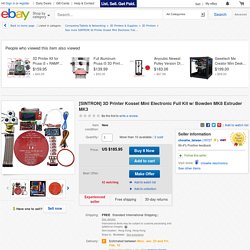 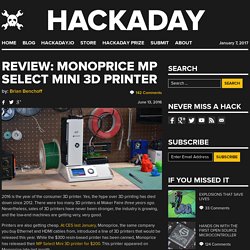 Yes, the hype over 3D printing has died down since 2012. There were too many 3D printers at Maker Faire three years ago. Nevertheless, sales of 3D printers have never been stronger, the industry is growing, and the low-end machines are getting very, very good. Printers are also getting cheap. At CES last January, Monoprice, the same company you buy Ethernet and HDMI cables from, introduced a line of 3D printers that would be released this year. My curiosity was worth more than $200, so Hackaday readers get a review of the MP Select Mini 3D printer. Boring Specs The spec sheet for the MP Select Mini boasts a 120 x 120 x 120mm build area, 100 micron resolution, a heated build plate, and a printing speed of 55mm/second.

Monoprice’s MP Select Mini doesn’t require special filament, and it can use the standard Open Source 3D printing software. Judging by the spec sheet, I’d guess Monoprice doesn’t even know what they have on their hands here. Prints. CNC Needle Cutter. File:Prusa-i3-wood-in-melamime.jpg. CNC Table & Storage. How to get started with CNC. Fusion 360 is pretty much all I use nowadays in terms of 3D software. 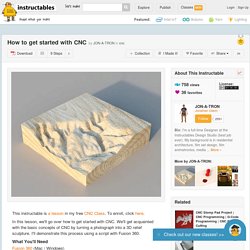 FULL DISCLOSURE: Fusion 360 is an Autodesk product, and Instructables is an Autodesk company, so this might seem like a biased choice. That's not exactly the case, and here's why: It's easy to learn. The UI has been carefully designed from the ground up to be clean, minimal, and simple. You can go from zero knowledge about 3D modeling to making simple objects in an afternoon.It's powerful. I've been 3D modeling for over 13 years, and I can tell you honestly that this program is perfect for the kind of work I do: furniture, toys, machines, household products, etc.

There are a number of other programs out there that could be used to produce the same results, and if you're comfortable with something else (especially if you've already paid for it), there's no reason why you shouldn't stick with it. CNC Dummies for Routers. [This Old Tony] has a few videos that have made appearances on Hackaday. 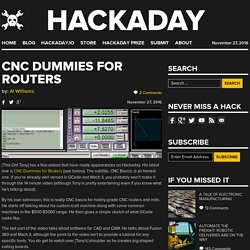 His latest one is CNC Dummies for Routers (see below). The subtitle, CNC Basics, is an honest one. If you’re already well versed in GCode and Mach 3, you probably won’t make it through the 14 minute video (although Tony is pretty entertaining even if you know what he’s talking about). By his own admission, this is really CNC basics for hobby-grade CNC routers and mills. He starts off talking about his custom-built machine along with some common machines in the $500-$5000 range. The last part of the video talks about software for CAD and CAM. Coffee Maker Delta 3D Printer. JRLS 1000 DIY SLS-3D-PRINTER. Here you can see some prints I have made with this printer. 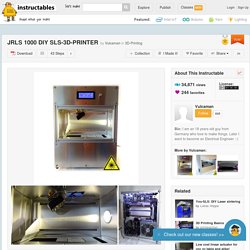 The cube is printed in grinded Instant-tea (95% Sugar). I am using Instant-Tea, because of the red color. The 450nm laser will be absorbed well by the red powder. White sugar will not work, because it will just reflect the laser. The laser is focused to 0.2mm. The cube has a size of 25x25x25mm and took 2 hours to print The tube has a size of 15x20x10mm and took 45min to print. A Truly Classy Metal-Framed Mini CNC. We’ve seen a number of DVD- and CDROM-based small CNC machines here, but few are as simply beautiful as this one by [julioberaldi] over on Instructables (translated from Portuguese here). We’ll cut to the chase; it’s the frame. Cut from steel sheet scraps with a hacksaw, and welded or soldered together with “bar solder”. It looks like a lot of sanding, painting, and polishing went on. The result is something we’d be proud to have on our desk.