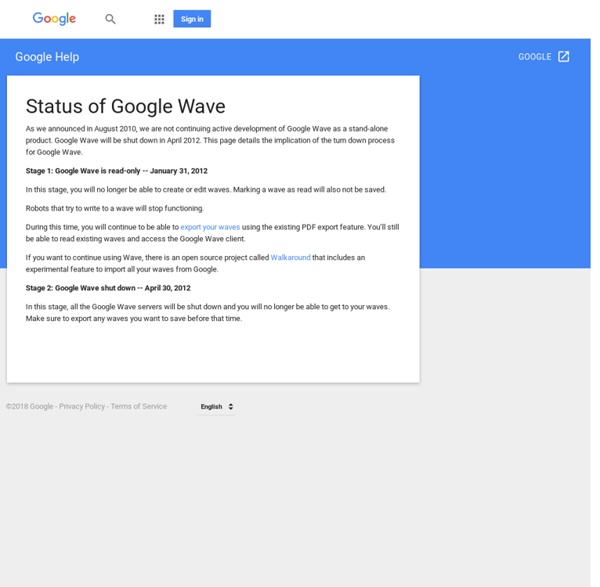 As we announced in August 2010, we are not continuing active development of Google Wave as a stand-alone product. Google Wave will be shut down in April 2012. This page details the implication of the turn down process for Google Wave. Stage 1: Google Wave is read-only -- January 31, 2012 In this stage, you will no longer be able to create or edit waves. Marking a wave as read will also not be saved. Robots that try to write to a wave will stop functioning. During this time, you will continue to be able to export your waves using the existing PDF export feature. If you want to continue using Wave, there is an open source project called Walkaround that includes an experimental feature to import all your waves from Google.

Google Wave dev preview hands-on and impressions After an impressive debut at Google I/O, the company's newest experiment and collaborative chat client has been making its way into the hands of developers in the lead-up to a torrent of new testers on September 30th. We had a chance to stop by Google's San Francisco office last week for a guided tour of the latest build of Wave with creators Lars and Jens Rasmussen, and have since then spent the better part of our free time working through the ins and outs of the new communication platform. Does it live up to the hype, even in this bug-infested interim build?

Facebook Usage in South Africa – March 2011 Welcome to our new series of monthly Facebook statistics in South Africa. This article provides you with the latest user numbers for Facebook in South Africa. 2 week ago, Marc Cowan, Head of Emerging Market at Facebook, gave a presentation in Cape Town on the social change. He said that soon South Africa will hit the 4 million user mark. Let’s see where we are today. On March the 3rd, 2011, Facebook counted 3.761.160 active users in South Africa. How To Use Google Buzz. If you’re a GMail user you’ve no doubt come across a brand new section of your email called Buzz. Buzz is Google’s new social network and it’s already created a stir. There have been concerns over privacy but all in all, the reaction has been very largely positive. This article is a simple guide explaining how to use the service.

Making Business Sense of Social Media and Social Networking – Twitter For Business Yesterday evening, my time, I attended a rather interesting webcast with Sandy Carter, IBM’s Worldwide Sales Vice President, IBM Social Business, Collaboration, and Lotus Sales and Evangelism, along with Jeremiah Owyang, Industry Analyst at Altimeter Group, on the topic of Why Be Social?. It surely was quite an interesting event and, if you would be interested, you can catch up with the tweet stream by checking out the #sbweb hash tag; a copy of the slides both Sandy and Jeremiah used can be downloaded over here as well. Amongst some of the very insightful ideas shared throughout that one hour webcast was a reflection on how little most businesses seem to be spending nowadays (And not just money!) on providing education on making use of all of these social software tools, which I found rather intriguing, because it looks like we are bound to repeat the very same mistakes we did back then when something called email, or Instant Messaging, for that matter! first came about.

Turn Off Google Buzz - Unbuzz After yesterday’s revelation of Google Buzz, one of the big questions that people are asking this morning is “how do I turn off Google Buzz, exactly?” Or, in cutesier language, “how do I unBuzz?” Even though Google is roping the 176 million+ Gmail accounts into their great social experiment, they’re not evil (that’s their motto, after all), and while the off switch isn’t staring you in the face, it’s fairly painless to turn Google Buzz off: In any Gmail window, whether it’s your regular inbox, your Buzz inbox, or an individual message, scroll down to the bottom of the screen.In the footer, you’ll see a text link that says “turn off buzz.” Click that link. That’s it.

Musing about sharing and social in business To paraphrase Peter Drucker, the primary purpose of a business is to create customers, people who are able and willing to part with their money to buy goods and services from you. To paraphrase Ronald Coase, the primary purpose of a firm is to reduce business transaction costs, principally the costs of information, search, contracting and enforcement. Words like “sharing” and “social” are often treated as fluffy and ephemeral and Utopian and otherworldly, dismissed as being too pinko-lefty-tree-hugger to make business sense. Which begs the question.

Admin templates for Google Chrome make it more enterprise-friendly System admins generally aren't fond of rolling out new software to their users if they don't have a measure of control over what those users can and can't do with the app in question. Google knows that, and they've been working for a while now to add enterprise-friendly policy support to Chrome. Now, Google has made policy templates available for download which provide a measure of lockdown functionality. As you can see, after importing the .ADM files into the Windows Group Policy Editor you'll be able to manage a handful of Chrome settings via a local machine policy. A default home page and proxy settings can be configured and Chrome Sync can be blocked, but the bulk of the options are related to background communications with Google (alternate error pages, DNS prefetch, crash reporting, suggestions, etc.). There are a few things missing right now.

Download Dropbox - Online backup, file sync and sharing made easy. When your download is complete, run the Dropbox installer Install the appropriate package if you want to use Dropbox on your Linux Desktop.If your distribution is not listed then choose "Compile from Source". Note: These packages install an open-source helper application. The version of this application does not change as frequently as the main Dropbox application. Early Access Release Channels Chrome supports a number of different release channels. We use these channels to slowly roll out updates to users, starting with our close to daily Canary channel builds, all the way up to our Stable channel releases that happen every 6 weeks roughly. Channels Windows Mac

The Seven Needs of Real-Time Curators I keep hearing people throw around the word “curation” at various conferences, most recently at SXSW. The thing is most of the time when I dig into what they are saying they usually have no clue about what curation really is or how it could be applied to the real-time world. So, over the past few months I’ve been talking to tons of entrepreneurs about the tools that curators actually need and I’ve identified seven things. First, who does curation? Bloggers, of course, but blogging is curation for Web 1.0. Look at this post here, I can link to Tweets, and point out good ones, right? Pure Reader — Do your Google Reader experience a favour We’ve already seen a bunch of prettifiers for Safari, but here’s a new one that… that… you just have to look at it. Pixel specialist Na Wong (artist profile) has hand crafted the most beautiful Google Reader restyling of modern times. Pure Reader. Personally I never quite got into the whole “Helveti” trend, so I just ended up avoiding Google Reader on the web altogether. But this new extension… it… it recrafts Google Reader into an application, but at the same time not mimicking desktop UI. It’s free, it’s awesome, it’s here.

Content Strategy: Exploring Content Curation Tools Content curation has been getting a lot of attention recently. We’ve covered what it is, why it’s valuable and offered best practices on how to curate content on your own. Yet, if management systems can be designed to manage content, why not build one to curate content? More than RSS feeds or topical searches, there are a few products that aim to help professionals gather content from around the web that’s relevant to them. Twitter, Facebook, and social activism At four-thirty in the afternoon on Monday, February 1, 1960, four college students sat down at the lunch counter at the Woolworth’s in downtown Greensboro, North Carolina. They were freshmen at North Carolina A. & T., a black college a mile or so away. “I’d like a cup of coffee, please,” one of the four, Ezell Blair, said to the waitress. “We don’t serve Negroes here,” she replied.

If anyone is interested in a Wave account but has not yet got an invite, just reply to this dicussion. I have about 20 available (at this time) by thethought Dec 13

I notice that several people have attempted to put their googlewave account into pearltrees and all have encountered a 303 message. I also notice that someone has put their igoogle account in. I tried because I wanted to see if I could "accidently" compromise my privacy (could you see my mail) but so far Google seems to have made sure that does not happen. by thethought Dec 11