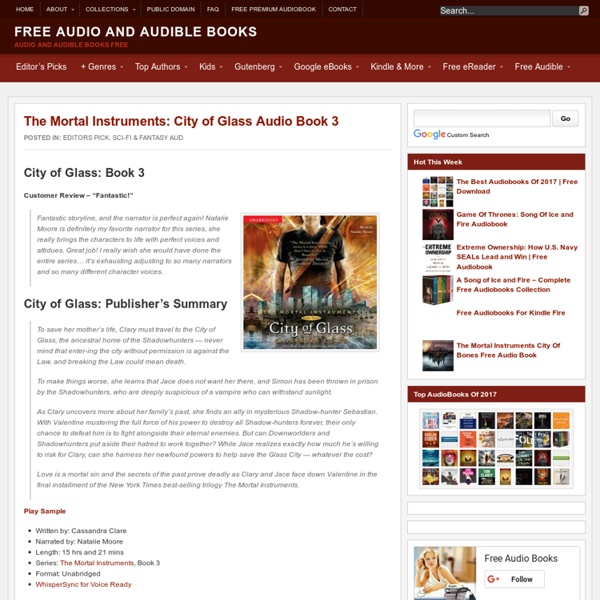 City of Glass: Book 3 Customer Review – “Fantastic!” Fantastic storyline, and the narrator is perfect again! Natalie Moore is definitely my favorite narrator for this series, she really brings the characters to life with perfect voices and attidues. Great job! I really wish she would have done the entire series… it’s exhausting adjusting to so many narrators and so many different character voices. City of Glass: Publisher’s Summary To save her mother’s life, Clary must travel to the City of Glass, the ancestral home of the Shadowhunters — never mind that enter-ing the city without permission is against the Law, and breaking the Law could mean death.To make things worse, she learns that Jace does not want her there, and Simon has been thrown in prison by the Shadowhunters, who are deeply suspicious of a vampire who can withstand sunlight.As Clary uncovers more about her family’s past, she finds an ally in mysterious Shadow-hunter Sebastian. Play Sample or

Dan Brown Inferno Download Free Audio book Has it been almost four years since the last Dan Brown novel? Yes it has! In his latest work, Inferno, Brown pulls out the unflappable symbologist Dr. Robert Langdon of Di Vinci Code and Angels and Demons. Brown uses the same formula for his new novel, Inferno, substituting the Bible for Dante. City of Fallen Angels: The Mortal Instruments, Audio Book 4 Publisher’s Summary City of Fallen Angels take up where City of Glass left off. With Valentine out of the way, Clary thought she and Jace could finally be together–but when someone starts murdering the Shadowhunters who used to be in Valentine’s Circle and leaving their bodies around New York City in a manner designed to destroy the new peace between Downworlders and Shadowhunters, she realizes the past can never be left entirely behind. As the Shadowhunters scramble to find out what’s really going on, Jace breaks off all communication with her, refusing to tell her why. Desperate to help him, Clary plunges into solving the mystery, coming ever closer to a secret whose revelation may mend her relationship with Jace–or rip it apart forever.Meanwhile, when Camille Belcourt, the elegant bloodsucker who used to rule New York’s vampire clans with an iron fist, returns to the city determined to re-establish her control, a vampire war is born.

The Mortal Instruments City of Ashes Audio Book 2 Customer Review – “Exciting” After I finished listening to City of Bones I couldn’t wait until book two, City of Ashes was released. To fully appreciate it, I re-listened to book one and then continued straight into book two. The Host: A Novel by Stephenie Meyer Audio Book Download Listened day and night for this novel – This was truly the first audio book that I simply couldn’t take out of my ears/head. Although it goes along a relatively simple story line the emotions are so well depicted and so well interpreted by the reader that you simply can not put your audio device down. I will sure be listening to it once again. It was simple and beautiful, sci-fi and love story, epic journey and family affair all in one. I would recommend this to anyone who wants to feel.

Mockingjay: The Final Book of The Hunger Games Audio Book Customers Review – “Excellent End to the series” I found this to be a wonderful ending to this epic trilogy. It went on so many twists and turns that I had no idea where it would end up. I would guess what would happen next, and though I was right, the book would amp up what just happened to levels I wasn’t expecting. It is quite violent, but that’s the nature of the series, and I applaud it for being so gritty. Neverwhere [Adaptation] by Neil Gaiman - Audiobook Free Neverwhere Customer Review – “This Cast Needs to Make This Movie NOW” I’m a huge Neverwhere fan – the kind that is always pining for any kind of hint or glimmer of the Seven Sisters (ONE DAY WE SHALL HAVE OUR SEQUEL) or film adaptation. This radioplay is nothing short of superb, and a must for Neverwhere fans.This cast brings London Below to life way better than any I could’ve fancasted. McAvoy makes Richard not only good and sweet and earnest, but someone you can’t help but love. Dormer is the perfect Door to this bizarre land. Harewood and Okonedo lend delicious edges to the Marquis de Carabas and Hunter.

Ender's Game: Special 20th Anniversary Edition Free AudioBook Customer Review – “The Enemies Gate is Down” This is a classic by Orson Scott Card and is the first book in the Enders series. This was originally written as a standalone book but the author has gone back to expanded the universe. Divergent by Veronica Roth Free Audiobook Customer Review Great book! A “page” turner.