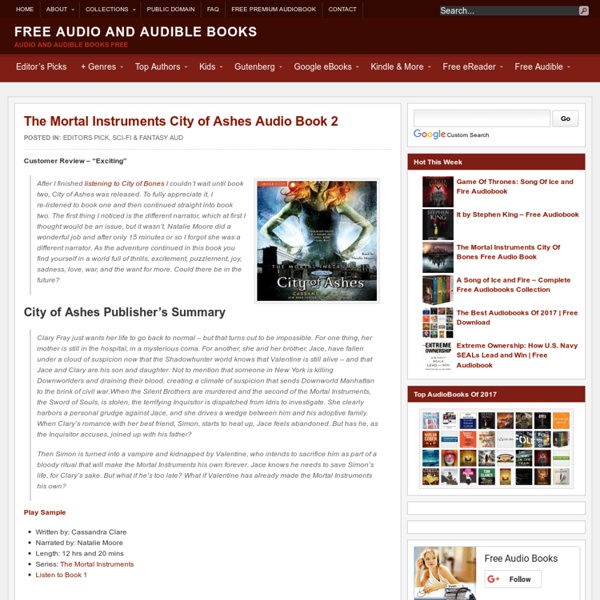 Customer Review – “Exciting” After I finished listening to City of Bones I couldn’t wait until book two, City of Ashes was released. To fully appreciate it, I re-listened to book one and then continued straight into book two. City of Ashes Publisher’s Summary Clary Fray just wants her life to go back to normal – but that turns out to be impossible. Play Sample Written by: Cassandra ClareNarrated by: Natalie MooreLength: 12 hrs and 20 minsSeries: The Mortal InstrumentsListen to Book 1 Learn how to get this audio book free (on audiobooks.com) ©2008 Cassandra Claire, LLC; (P)2008 Simon and Schuster, Inc.

The Mortal Instruments: City of Glass - Free Audio Book 3 City of Glass: Book 3 Customer Review – “Fantastic!” Fantastic storyline, and the narrator is perfect again! Natalie Moore is definitely my favorite narrator for this series, she really brings the characters to life with perfect voices and attidues. Great job! City of Glass: Publisher’s Summary To save her mother’s life, Clary must travel to the City of Glass, the ancestral home of the Shadowhunters — never mind that enter-ing the city without permission is against the Law, and breaking the Law could mean death.To make things worse, she learns that Jace does not want her there, and Simon has been thrown in prison by the Shadowhunters, who are deeply suspicious of a vampire who can withstand sunlight.As Clary uncovers more about her family’s past, she finds an ally in mysterious Shadow-hunter Sebastian. Play Sample Written by: Cassandra ClareNarrated by: Natalie MooreLength: 15 hrs and 21 minsSeries: The Mortal Instruments, Book 3Format: UnabridgedWhisperSync for Voice Ready or

City of Fallen Angels: The Mortal Instruments, Audio Book 4 Publisher’s Summary City of Fallen Angels take up where City of Glass left off. With Valentine out of the way, Clary thought she and Jace could finally be together–but when someone starts murdering the Shadowhunters who used to be in Valentine’s Circle and leaving their bodies around New York City in a manner designed to destroy the new peace between Downworlders and Shadowhunters, she realizes the past can never be left entirely behind. As the Shadowhunters scramble to find out what’s really going on, Jace breaks off all communication with her, refusing to tell her why. Desperate to help him, Clary plunges into solving the mystery, coming ever closer to a secret whose revelation may mend her relationship with Jace–or rip it apart forever.Meanwhile, when Camille Belcourt, the elegant bloodsucker who used to rule New York’s vampire clans with an iron fist, returns to the city determined to re-establish her control, a vampire war is born. Play Sample ©2011 Cassandra Claire LLC.

Mockingjay: The Final Book of The Hunger Games Audio Book Customers Review – “Excellent End to the series” I found this to be a wonderful ending to this epic trilogy. It went on so many twists and turns that I had no idea where it would end up. I would guess what would happen next, and though I was right, the book would amp up what just happened to levels I wasn’t expecting. It is quite violent, but that’s the nature of the series, and I applaud it for being so gritty. Publisher’s Summary Against all odds, Katniss Everdeen has survived the Hunger Games twice. Still hungry? ©2010 Suzanne Collins (P)2010 Scholastic Audio What the Critics Say “At its best the trilogy channels the political passion of 1984, the memorable violence of A Clockwork Orange, the imaginative ambience of The Chronicles of Narnia and the detailed inventiveness of Harry Potter.” “Unfolding in Collins’ engaging, intelligent prose and assembled into chapters that end with didn’t-see-that-coming cliffhangers, this finale is every bit the pressure cooker of its forebears. or

Ender's Game: Special 20th Anniversary Edition Free AudioBook Customer Review – “The Enemies Gate is Down” This is a classic by Orson Scott Card and is the first book in the Enders series. This was originally written as a standalone book but the author has gone back to expanded the universe. Publisher’s Summary Now a Major Motion Picture. Written by: Orson Scott CardNarrated by: Stefan Rudnicki, Harlan EllisonLength: 11 hrs and 57 minsSeries: Ender’s Game, Book 1 Learn how to this audiobook free (audible.com)! Download this audio book free on AudioBooks.com Divergent by Veronica Roth Free Audiobook Customer Review Great book! A “page” turner. Summary In Beatrice Prior’s dystopian Chicago, society is divided into five factions, each dedicated to the cultivation of a particular virtue’Candor (the honest), Abnegation (the selfless), Dauntless (the brave), Amity (the peaceful), and Erudite (the intelligent). Unabridged (Audiobook)Written by: Veronica RothNarrator: Emma GalvinLength: 11 hours 12 minutes Click to Preview Learn how to download this audio for free on audiobooks.com or Get This Audiobook for free on Audible.com

Emma by Jane Austen (Dramatic Reading) Audio Book by Jane Austen (1775-1817) Emma is a novel about youthful hubris and the perils of misconstrued romance….As in her other novels, Austen explores the concerns and difficulties of genteel women living in Georgian-Regency England; she also creates a lively comedy of manners among her characters. Before she began the novel, Austen wrote, “I am going to take a heroine whom no one but myself will much like.” In the very first sentence she introduces the title character as “Emma Woodhouse, handsome, clever, and rich.” Emma, however, is also rather spoiled, headstrong, and self-satisfied; she greatly overestimates her own matchmaking abilities; she is blind to the dangers of meddling in other people’s lives, and her imagination and perceptions often lead her astray. (Summary by Wikipedia) Total running time: 16:25:26 CD booklet | Album Art sample mp3 and ogg file 01 – Volume 1 Chapter 1 – 00:20:58 [mp3@64kbps – 10.0MB] [mp3@128kbps – 20.1MB] [ogg vorbis – 11.3MB] Source: Librivox.org

Insurgent: Divergent by Veronica Roth, Free AudioBook 2 Publisher’s Summary One choice can transform you – or it can destroy you. But every choice has consequences, and as unrest surges in the factions all around her, Tris Prior must continue trying to save those she loves – and herself – while grappling with haunting questions of grief and forgiveness, identity and loyalty, politics and love.Tris’s initiation day should have been marked by celebration and victory with her chosen faction; instead, the day ended with unspeakable horrors. War now looms as conflict between the factions and their ideologies grows. And in times of war, sides must be chosen, secrets will emerge, and choices will become even more irrevocable – and even more powerful. Play Sample Written by: Veronica RothNarrated by: Emma GalvinLength: 11 hrs and 22 minsSeries: Divergent, Book 2Format: Unabridged See also Get This free on Audiobooks.com or Get This Audiobook Free On Audible.com

The Hobbit Audiobook Free Customer Review – “Absolutely the BEST” Rob Inglis’s narration is clear and crisp with characters finely enunciated–from the individual dwarfs to Bilbo, from Gandalf to the spiders and the dragon! This reading is better than any dramatization (although there are some good ones) because it combines the best of narration with the value of the unabridged text. Inglis also sings the poetry–haunting and stirring melodies performed beautifully. In a way, Inglis paints the text vocally in the manner that Alan Lee painted the text visually. Publisher Summary Like every other hobbit, Bilbo Baggins likes nothing better than a quiet evening in his snug hole in the ground, dining on a sumptuous dinner in front of a fire. The Hobbit Audio Book UNABRIDGEDby J. ©1966 J.R.R.