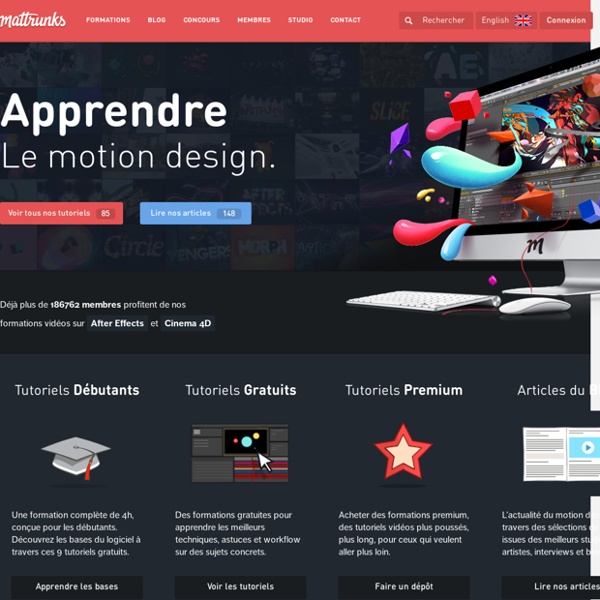 Initial thoughts on the Canon EOS C100 Edit: Philip here. Just arrived in Helsinki and reading the specs, but one thing jumps out at me like a flasher in the bushes…there appears to be no slow motion feature at all! Not even 720p. Surely this is an omission in the specs. Daniel Gies -Tutorials ELEMENTED is an original animated adventure story that needs your help to break through the status quo. Please watch and share our concept trailer. Your views count! Find yourself immersed in a world of science, intrigue, and adventure on a curious, beautiful planet where 12 year old Wren, her best friend Ash, and her secret accomplice Memoir investigate the mysterious big and small happenings around them and learn about the periodic table of elements along the way.

5 expressions that will change your life - MoGraph Central - graymachine, on Oct 18 2007, 08:23 AM, said: You put them on any property you want. The golden rule with expressions is:Expressions ONLY do what you can otherwise do with keyframes. Their purpose is to simplify otherwise complex keyframe animation. Well said, Harry, and great thread, it's spurred me to share one of my recent effects involving expressions:a little while back I needed to make an oscillating or 'crenelated' spiral path:

vj labor Elektra, Montreal 2013 (Yatra Arts) from Joel Dittrich on Vimeo. Live audio/visual performance at Elektra festival, Montreal, Canada, 03 may 2013. Curated by Yatra Arts. White Noise/Black Noise is an audio/visual project where I´m experimenting with intermodal aesthetics, creating audio and visuals side by side and performing live with a digital set up, relaying heavily on OSC, MIDI and audio analysis, to control audio and visuals simultaneously. 100% work by me. Tools used in this version and performance: Get 100+ Real Light Leak & Lens Flare Overlays in Full HD from RodyPolis If your film work consists of a lot of wedding, music, or experimental videos, you probably include a good amount of stylistic light leaks and lens flares to add a little more panache to match the emotional nature of your material. However, if you or your clients are like the Chotchkie’s Manager from Office Space and want just a little more flair, RodyPolis has a collection of over 100 HD leaks and flare overlays called Lens FX Prism that are not only organic, but reasonably priced. Okay, so you can definitely find a bunch of great overlays online, be they flares, leaks, grains, or whatever. However, many times you get what you pay for (flat, poorly designed — essentially overlays that look like overlays). One of the great features of Lens FX Prism is that all of the light leaks and flares were created organically in-camera instead of being computer generated, so they offer a more natural look and feel. Here’s what RodyPolis has to say about their overlay package: