Squishy Circuits – Sylvia’s Mini Maker Show. By Super Awesome Sylvia and her dad, James Are you curious about experimenting with electronics, but the fear of electric shock or soldering iron burns keep you away? 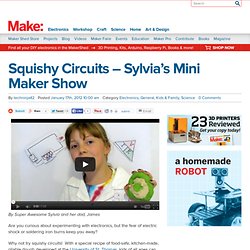 Why not try squishy circuits! With a special recipe of food-safe, kitchen-made, pliable dough developed at the University of St. Thomas, kids of all ages can easily use their hands to mold their very own simple circuits right before their eyes! Lets go! For this build, we’ll be mixing up two different types of dough, and then experimenting. Deionized or distilled water (Tap water is OK if you don’t have any)FlourSaltSugarVegetable oilCream of tartar (or lemon juice to substitute if you can’t find the stuff)Food coloringAnd last but not least, some measuring cups and a medium sized pot to mix it all up in For basic experimentation, you’ll need: Subscribe to Sylvia’s Mini Maker Show Podcast in iTunes, download the m4v video directly, or watch it on YouTube and Vimeo. 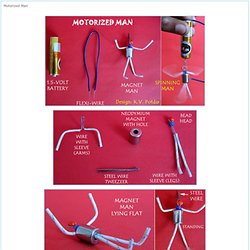 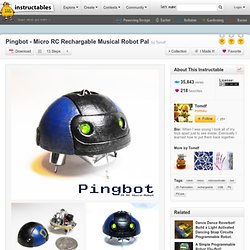 I've built a few experimental robots in the past and, to be honest, they all looked the part. They were nothing more than circuit boards with wheels glued on.They did help me learn, but they just didn't feel like completed robots. The main purpose of this project was to combine electronics and 3D fabrication into a robot complete in both form and function. A fun robot with a sleek look and a bit of personality. The second goal was to make the robot as small as possible, smaller than half a ping-pong ball (hence the name).

How to build your Modular Vibrating Robot. Nano - HEXBUG. Image 1 of 8 Starting with the left most prototype this is the first of a long evolution of development. To create a low center of gravity the motor even early on is positioned underneath the chassis. Putting the 'micro' inMicro Robotic Creatures How small can you go? Using common locomotion principles (see "How it Works," below) we set out to make a really small HEXBUG that gave the appearance of being smart. DIY Tooth Brush Robot. Mini Robot Smackdown. Paper Circuitry at Home: Electric Origami. This little LED-lit cube is much more than just a paper lantern: It’s a translucent and flexible thin-film electronic circuit that hooks up a battery to an LED, limber enough to be folded into an origami box. 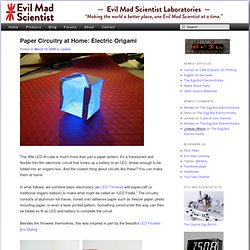 And the coolest thing about circuits like these? You can make them at home. In what follows, we combine basic electronics (an LED Throwie) and papercraft (a traditional origami balloon) to make what might be called an “LED Foldie.” The circuitry consists of aluminum foil traces, ironed onto adhesive paper such as freezer paper, photo mounting paper, or even a laser printed pattern. Something constructed this way can then be folded so fit an LED and battery to complete the circuit. Besides the throwies themselves, this was inspired in part by the beautiful LED Floaties [via Make]. BUILD: Making the Blinkybug Kit. When I first got this Kit in the mail from the Maker Shed I stared puzzled at the box. 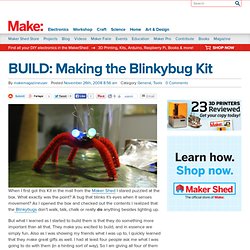 What exactly was the point? A bug that blinks it’s eyes when it senses movement? As I opened the box and checked out the contents I realized that the Blinkybugs don’t walk, talk, chalk or really do anything besides lighting up. But what I learned as I started to build them is that they do something more important than all that. They make you excited to build, and in essence are simply fun. Here is what the creator of this kit thought “This grew into the idea of planting little robotic insects around the city… on trees, fences, etc, to surprise people and just add a bit of strangeness to the environment.

This is the simple little cardboard box it comes in. Everything from the kit all laid out. The next step is to determine the polarity of the LED and twist the correct ends together. Blinkybug (Maker Faire version) UPDATE: Blinkybug Kits, which include all the parts to make 4 bugs, are now available on Make Magazine's online Maker Store. 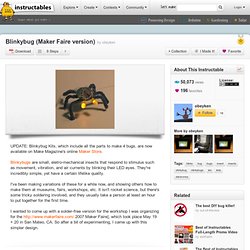 Blinkybugs are small, eletro-mechanical insects that respond to stimulus such as movement, vibration, and air currents by blinking their LED eyes. They're incredibly simple, yet have a certain lifelike quality. I've been making variations of these for a while now, and showing others how to make them at museums, fairs, workshops, etc. It isn't rocket science, but there's some tricky soldering involved, and they usually take a person at least an hour to put together for the first time. I wanted to come up with a solder-free version for the workshop I was organizing for the 2007 Maker Faire], which took place May 19 + 20 in San Mateo, CA.