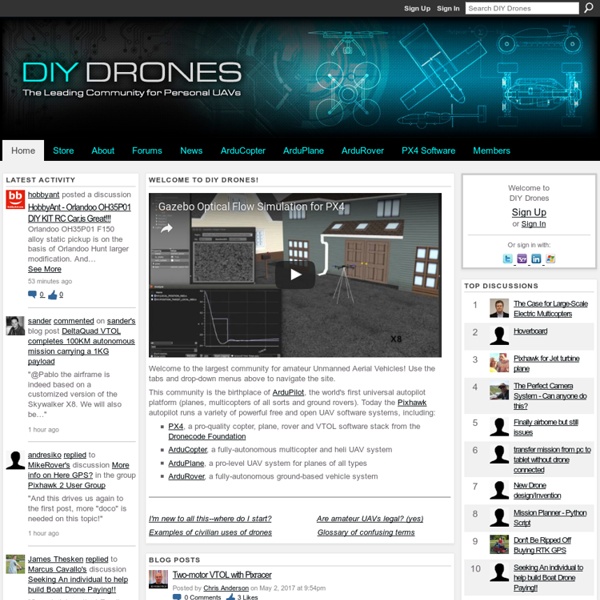 An Enterprise-Class Open Source Distributed Monitoring Solution Zabbix is the ultimate enterprise-level software designed for monitoring availability and performance of IT infrastructure components. Zabbix is open source and comes at no cost. With Zabbix it is possible to gather virtually limitless types of data from the network. High performance real-time monitoring means that tens of thousands of servers, virtual machines and network devices can be monitored simultaneously.

BaronPilot Arduino based copilot autostabilizer with Nintendo Wii component (tricopter, quadcopter) This is a program to stabilize a multicopter (copilot), runs on microcontroller like Arduino or Teensy++ and only a wii motion plus, no other electronics needed. These project started April, 2010. Supported are planes, tricopter, quadricopter (+ and x config), hexacopter (penta and coaxial). The self-leveling capability helps when doing FPV (first person view). Drone attacks in Pakistan Since 2004, the United States government has attacked hundreds of targets in Northwest Pakistan using unmanned aerial vehicles (drones) controlled by the Central Intelligence Agency's Special Activities Division.[4] Most of these attacks are on targets in the Federally Administered Tribal Areas along the Afghan border in Northwest Pakistan. These strikes began during the George W. Bush administration, and have increased substantially under President Barack Obama.[5] Some in the media have referred to the attacks as a "drone war".[6][7] Until recently,[when?] the US government had officially denied the extent of its policy; in May 2013 it acknowledged for the first time that four US citizens, including Anwar Al-Awlaki, had been killed in the strikes.[8] Surveys have shown that the strikes are deeply unpopular in Pakistan, where they have contributed to a negative perception of the United States.[9]

Topic: Reloading Discussion BobbyD, I’m not sure I would want to use cast copper. The idea is to swage copper as opposed to casting lead. To cast cooper you would have to have a furnace capable of around 2000 degrees. Arduino Quadcopter: What You Need to Build One (DIY Project) If you love the idea of building your own quadcopter but haven’t got a clue how and where to start, you are definitely on the right page. We know how difficult and frustrating the research can be, so we decided to make a tutorial for building your own quadcopter using an Arduino board. We hope that you will find it useful. And, to get you even more excited about your upcoming project, here is an Arduino quadcopter in action: Building your own quadcopter from the ground up includes plenty of hours and hard work. Therefore, if patience isn’t your stronger side, and if you don’t possess the necessary programming skills, you can choose a quadcopter kit that is pre-built.

U.S. Air Force May Buy 18,000 Apple IPad2s for Flight Crews (Updates with tablet market share in 10th paragraph and share prices in 11th paragraph.) Feb. 10 (Bloomberg) -- The U.S. Air Force may buy as many as 18,000 iPad2s in what would be one of the military’s biggest orders of computer tablets, accelerating Apple Inc.’s inroads into the federal government. The service’s Air Mobility Command plans to issue a request for proposals to buy between 63 and 18,000 “iPad 2, Brand Name or Equal devices” to lighten the load of flight crews, according to a notice posted on the Federal Business Opportunities website.