MIT builds self-completing programs. Since he was a graduate student, Armando Solar-Lezama, an associate professor in MIT’s Department of Electrical Engineering and Computer Science, has been working on a programming language called Sketch, which allows programmers to simply omit some of the computational details of their code. 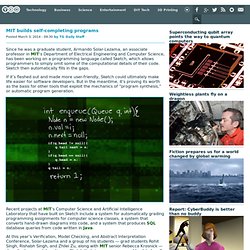 Sketch then automatically fills in the gaps. If it’s fleshed out and made more user-friendly, Sketch could ultimately make life easier for software developers. But in the meantime, it’s proving its worth as the basis for other tools that exploit the mechanics of “program synthesis,” or automatic program generation. Recent projects at MIT’s Computer Science and Artificial Intelligence Laboratory that have built on Sketch include a system for automatically grading programming assignments for computer science classes, a system that converts hand-drawn diagrams into code, and a system that produces SQL database queries from code written in Java. Sketch treats program synthesis as a search problem. Getty Images ditches lawsuits, now lets you embed its images for free.

So much for mass takedown requests and courtrooms. 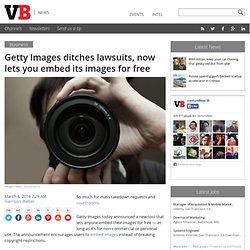 Getty Images today announced a new tool that lets anyone embed their images for free — as long as it’s for non-commercial or personal use. The announcement encourages users to embed images instead of breaking copyright restrictions. Pictured below, an embedded photo from Getty Images includes photographer credit, links back to the Getty Images site, and social share buttons. This change won’t eliminate Getty Images’ need to patrol and fight copyright violations, but it allows the stock photo company to boost its image and track the non-commercial distribution of its photos. If you can’t beat ‘em, join ‘em. Are you making or losing money with marketing automation? New Graphene Super Paper is 10x Stronger Than Steel. The University of Technology in Sydney recently unveiled a new type of graphene nano paper that is ten times stronger than a sheet of steel. 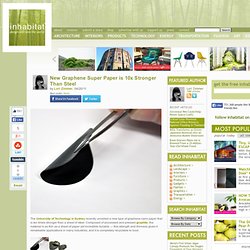 Composed of processed and pressed graphite, the material is as thin as a sheet of paper yet incredible durable — this strength and thinness gives it remarkable applications in many industries, and it is completely recyclable to boot. Photo by Wikimedia Commons To make graphene paper, raw graphite is milled and purified using a chemical bath, which reshapes its structure, allowing it to be pressed into thin sheets. These graphene sheets boast excellent thermal, electrical and mechanical properties – including excellent hardness and flexibility. Graphene offers many advantages over steel – it’s two times as hard, six times lighter and ten times higher in tensile strength. Raw graphite is a relatively plentiful material in Australia, where the research is being conducted. . + University of Technology Sydney Lead photo © Lisa Aliosio.

Scientists Use Super-Strong Bacteria to Produce 24K Gold. Gold Nugget photo from Shutterstock A team of Michigan State University researchers have discovered a bacterium that has the ability to withstand incredible amounts of toxicity to create 24-karat gold. 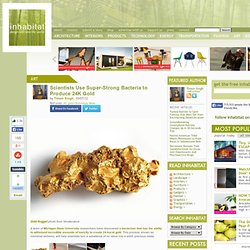 This process, known as microbial alchemy, will help scientists turn a substance of no value into a solid, precious metal. The team was led by Kazem Kashefi, assistant professor of microbiology and molecular genetics. Working along with Adam Brown, associate professor of electronic art and intermedia, the team discovered that the metal-tolerant bacteria Cupriavidus metallidurans can grow on massive concentrations of gold chloride – or liquid gold, a toxic chemical compound found in nature. According to the research team, the bacteria is at least 25 times stronger than previously reported. Brown and Kashefi fed the bacteria unprecedented amounts of gold chloride and within a week the bacteria transformed the toxins into a gold nugget.

. + Michigan State University Via Science Daily. Facebook’s drones could bring internet to the developing world—and stick it to mobile carriers - Quartz. Facebook is in talks to buy a drone company called Titan Aerospace for $60 million, according to TechCrunch. 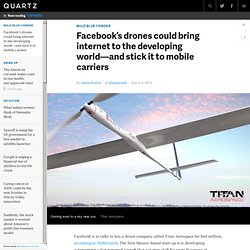 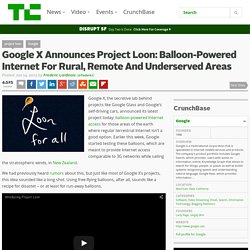 Facebook In Talks To Acquire Drone Maker Titan Aerospace. Facebook, one of the primary backers of the Internet.org initiative, which aims to bring affordable Internet access to the 5 billion people in the world who still lack connectivity, is in talks with a company that could help further that agenda. 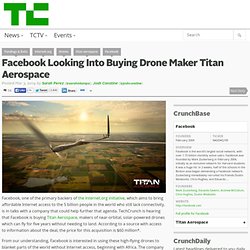 TechCrunch is hearing that Facebook is buying Titan Aerospace, makers of near-orbital, solar-powered drones which can fly for five years without needing to land. According to a source with access to information about the deal, the price for this acquisition is $60 million*. From our understanding, Facebook is interested in using these high-flying drones to blanket parts of the world without Internet access, beginning with Africa.

The company would start by building 11,000 of these unmanned aerial vehicles (UAVs), specifically the “Solara 60″ model. Wild flower blooms again after 30,000 years on ice. During the Ice Age, Earth’s northern reaches were covered by chilly, arid grasslands roamed by mammoths, woolly rhinoceros and long-horned bison. 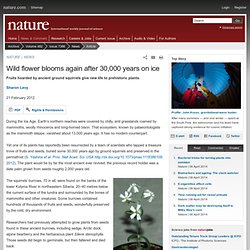 Web development, design, and other nerdy topics! A few months ago I was getting really stressed out. 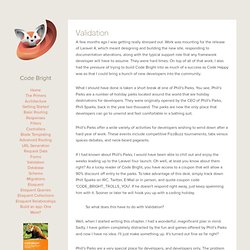 Work was mounting for the release of Laravel 4, which meant designing and building the new site, responding to documentation alterations, along with the typical support role that any framework developer will have to assume. They were hard times.