How to Install Google Play on 2017 Fire Tablets in 5 Minutes (Video) Amazon released two new Fire tablets this week, the Fire HD 8 and Fire 7, and it turns out it’s the same simple process to add the Google Play Store and Google apps to them as previous Fire tablets. 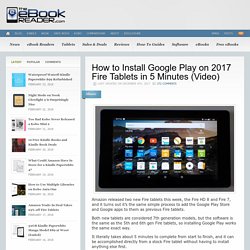 Both new tablets are considered 7th generation models, but the software is the same as the 5th and 6th gen Fire tablets, so installing Google Play works the same exact way. It literally takes about 5 minutes to complete from start to finish, and it can be accomplished directly from a stock Fire tablet without having to install anything else first. You don’t need to use a computer or root the tablet first; all you have to do is install 4 Google apps. Anyone can do it, and if you decide later that you don’t want Google Play on your tablet you can do a factory reset to wipe everything clean and make the tablet like it was when you first got it. This is the same exact process as earlier models and will work on any Fire tablet running Fire OS 5.x and up. Step #1: Prepare Your Fire Tablet 1. 2. 3. 4.

5 Free Chrome Add-Ons That Are Crazy Useful – Mark Slack – Medium. These 5 plugins will take your browser to the next level. 1. 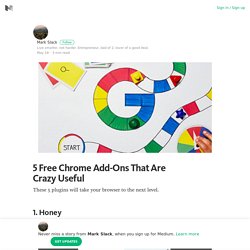 Honey Honey is my secret weapon for saving money online. It appears at checkout and automatically scours the Internet for any available coupon codes. Add Color To Flowers Using Science - ScienceBob.com. Many florists sell colored carnations, but I think it is more fun to make your own! 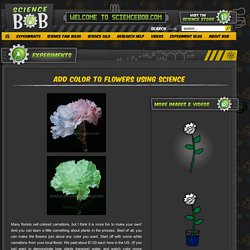 And you can learn a little something about plants in the process. Best of all, you can make the flowers just about any color you want. Start off with some white carnations from your local florist. We paid about $1.00 each here in the US. Would You Buy It?   □﻿ Where is My PST File and How Can I Move It Somewhere Else? Most people know that Outlook stores your email in a PST file, but figuring out where that file is located is a lot more tricky. 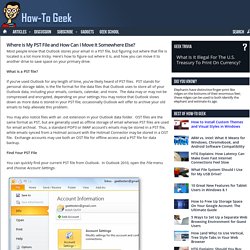 Here’s how to figure out where it is, and how you can move it to another drive to save space on your primary drive. What is a PST file? Acrobat Tool Set Exchange. InkOwl. How to Reset the Page Counter on a Brother Laser Printer By resetting your Brother printer's page counter, you can avoid having to reset your cartridge's flag gear or install one on a starter cartridge. 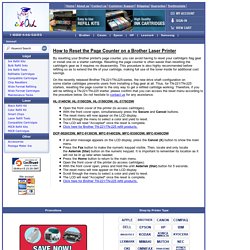 Resetting the page counter is often easier than resetting the cartridge's gear as it requires no disassembly. This procedure is also highly recommended before refilling so as to extend the life of your cartridge, making full use of the toner inside for additional cost savings. On the recently released Brother TN-221/TN-225-series, the new drive shaft configuration on some starter cartridges prevents users from installing a flag gear at all. Thus, for TN-221/TN-225 starters, resetting the page counter is the only way to get a refilled cartridge working. Open the front cover of the printer (to access cartridges). Getting Your Video - Ripping DVD Footage. OK, so you got those shiny new DVDs then? 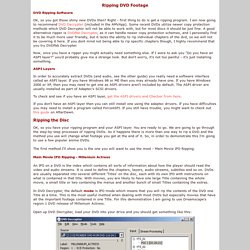 Right - first thing to do is get a ripping program. I am now going to recommend DVD Decrypter (included in the AMVApp). Some recent DVDs utilize newer copy protection methods which DVD Decryptor will not be able to work with, but for most discs it should be just fine. A good alternative ripper is DVDFab Decrypter, as it can handle newer copy protection schemes, and I personally find it to be much more user friendly, but it lacks the ability to rip individual chapters of the dvd, so we will not be covering it here. How to delete "System Volume Information" folder on Win 7 Solved.

System Reserved partition on wrong drive - how do I move it? How to Run Task Manager from Command Prompt: 3 Steps. Pismo Technic Inc. - Download. Use of the software available here is subject to acceptance of the relevent license agreement(s). 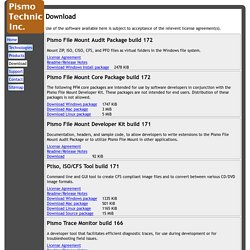 At times, you may run into the problem of being unable to open or access or work with files and folder. 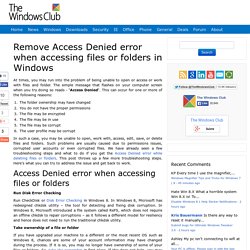 The simple message that flashes on your computer screen when you try doing so reads - ‘Access Denied’. This can occur for one or more of the following reasons: The folder ownership may have changedYou do not have the proper permissionsThe file may be encryptedThe file may be in useThe file may be corruptThe user profile may be corrupt In such a case, you may be unable to open, work with, access, edit, save, or delete files and folders. How to Take Full Ownership of Files & Folders in Windows 8. After introducing the User Account Control in Windows Vista, Microsoft increased the security of its core system files by hardening its Effective Permissions. 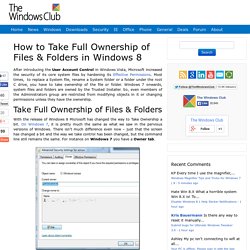 Most times, to replace a System file, rename a System folder or a folder under the root C drive, you have to take ownership of the file or folder. Windows 7 onwards, system files and folders are owned by the Trusted Installer. So, even members of the Administrators group are restricted from modifying objects in it or changing permissions unless they have the ownership. Enable the User Account Control box. Controlling when the UAC box appears is easy, just move the slider in the Control Panel. 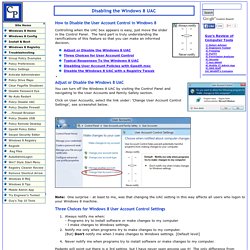 The hard part is truly understanding the ramifications of this feature so that you can make an informed decision. Adjust or Disable the Windows 8 UAC You can turn off the Windows 8 UAC by visiting the Control Panel and navigating to the User Accounts and Family Safety section. How to Print or Save a Directory Listing to a File. Printing a directory listing is something you may not do often, but when you need to print a listing of a directory with a lot of files in it, you would rather not manually type the filenames. You may want to print a directory listing of your videos, music, ebooks, or other media. Or, someone at work may ask you for a list of test case files you have created for the software you’re developing, or a list of chapter files for the user guide, etc. Code for America. How to Fix Your Overheating, RRoD, or E74 Xbox 360 with Mere Pennies. How to Fix Your Overheating, RRoD, or E74 Xbox 360 with Mere Pennies Microsoft has had a pretty bad wrap with their Xbox 360 gaming console.

Right from the start, the console has suffered a multitude of different hardware failures and design flaws. These problems cause the parts to get too hot and become faulty. I'm sure everyone who's had an Xbox 360 has gotten at least one Red Ring of Death or E74 error. Over the years, I have fixed many Xbox 360s, and through experimentation and documentation, I've figured out a few ways to fix them that can prevent and fix any Red Ring or E74 error.

High-Capacity Hard Drive Information. As hard drives are introduced with capacities greater than or equal to 2.2TB, the industry works to resolve known capacity addressing limitations that date back to the original design of the PC. These limitations are caused by 32-bit definitions used for partition sizes and logical block addresses (LBAs) resulting in a maximum addressable capacity size of 2.199TB. The most direct way to resolve this issue is to use Long LBAs. However, Long LBAs are only supported in 64-bit operating systems, like Windows™ 7 and Windows Vista™. Users wishing to use these high-capacity drives will need to implement a combination of operating system, BIOS, drive partition tables and hard disk drive (HDD) drivers that support high-capacity drives in order to gain full access to the high capacities offered.

When working in legacy environments, more effort will be required to ensure all components are capable of supporting high-capacity drives. What You Need to Know About Using UEFI Instead of the BIOS. New Windows 8 PCs don’t include the traditional BIOS. They use UEFI firmware instead, just as Macs have for years. How you go about doing common system tasks has changed. If you’re interested in why UEFI is replacing the BIOS, take a look at our overview of UEFI and how it’s different from the traditional BIOS.

User Profiles - Relocate to another Partition or Disk. How to Relocate User Profiles to another Partition or Disk in Windows 8 InformationThe method described in this tutorial allows relocating user profiles and folders already while installing Windows 8, before any user accounts are created, as well as after installation on an already installed system.The advantage of this method is that it changes some internal Windows 8 environment variables, being a “Do it once and forget” procedure. Changing the variables takes care of all existing and future user profiles, locating them when created to selected drive or partition.

The method is fail proof and reversible.When Windows 8 is installed, 5 or 6 system folders are created depending on chosen bit-version:PerfLogs (Performance Logs), where Windows stores performance and reliability logsProgram Files, where applications and software are installed. User Account Control (UAC) - Change Settings in Windows 8. Change default Program Files directory in Windows 8. Library - Set Default & Public Save Locations in Windows 8. Redirect a folder to a new location - Windows Help. How does a sound chip work? Can one modify the spoken text in toys? Tequila! Hack Your Hallmark Greeting Card. How To Hack An Audio Greeting Card. Many devices, like audio greeting cards and children’s toys, use a simple resistor–capacitor clock to govern their speed. Any of these devices would respond to this bending technique.

Shutdown or Restarting Windows 8 in a Remote Desktop Session. In a remote session the normal shutdown button only allows you to disconnect or log off. After a bit of research I found 2 easy ways of restarting a remote desktop session. Shut down or Restart Windows 8 from Remote Desktop. The X-Files Episode List (Upcoming AirDates, Titles, Numbers from Episodes ) How to Access the BBC iPlayer (and TV Like Doctor Who) from Outside the U.K. @theoldwolf: The reason for geographical barriers on TV is international licensing deals.

These more often than not DO NOT include online licenses, but precisely because of that, it is also stipulated that the content will not be made available online on the territory for which the license is sold. So, for instance, French TV will buy Lost's last season and the contract will say that nobody, ABC included, can distribute Lost in France online. It makes sense, why would a French channel pay for Lost if their potential audience is already legally watching the show on ABC.com? The catch is that the French channel is probably trying to save money. Turn an Old Computer Into a Do-Anything Home Server with FreeNAS 8. Using GPT Drives (Windows Drivers) This article provides information about how GUID Partition Table (GPT) disks are used in the Microsoft Windows family of operating systems.