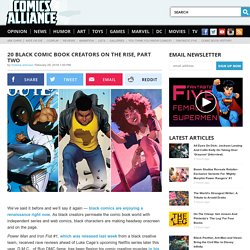 As black creators permeate the comic book world with independent series and web comics, black characters are making headway onscreen and on the page. Power Man and Iron Fist #1, which was released last week from a black creative team, received rave reviews ahead of Luke Cage’s upcoming Netflix series later this year. D.M.C., of Run DMC fame, has been flexing his comic creating muscles in his series, DMC. And black creators have been tearing up Kickstarter with their creations. In order to celebrate work by black comic creators, ComicsAlliance is highlighting some of the artists and writers who are bringing diverse characters and their own stories to the pages.

What happens when three roommates find magical weapons that weren’t meant for them? Nilah Magruder draws “cute animals and zombies” according to her website. You should know these 7 heroes of color who aren't Storm. Franchesca Ramsey, host of MTV’s Decoded, spent the weekend at New York Comic Con asking self-proclaimed comic book “superfans” if they could name seven superheroes of color. 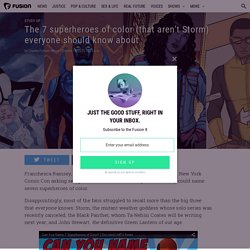 Disappointingly, most of the fans struggled to recall more than the big three that everyone knows: Storm, the mutant weather goddess whose solo series was recently canceled; the Black Panther, whom Ta-Nehisi Coates will be writing next year; and John Stewart, the definitive Green Lantern of our age. When Ramsey asked the people why it was so hard to name more than a few heroes of color, the most common answer was that there simply weren’t enough characters to choose from. This is only partially true. By and large, most of the classic superhero teams that we’re familiar with feature predominantly white, male rosters. Recent calls for more diverse characters from fans have resulted in the creation of new heroes like Kamala Khan, the Pakistani Ms. Monet St. America Chavez Dr.

How This Full-Figured Female Superhero Is Inspiring a New Generation of Fans. Harbinger, a comic book series about super-powered but socially challenged teenagers, has been penned by men and centered on male characters since the early '90s. 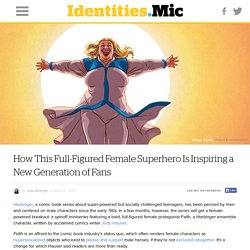 In a few months, however, the series will get a female-powered breakout: a spinoff miniseries featuring a bold, full-figured female protagonist Faith, a Harbinger ensemble character, written by acclaimed comics writer Jody Houser. Faith is an affront to the comic book industry's status quo, which often renders female characters as hypersexualized objects who exist to please and support male heroes, if they're not excluded altogether. It's a change for which Hauser said readers are more than ready. An authentic, female heroine: Valiant editor-in-chief Warren Simmons describes Faith as "one of the most unique characters in comics — a sci-fi loving, Firefly-quoting fangirl" who, when given the chance to stand alongside other superheroes, ends up proving herself "to be the bravest of them all. " Houser agrees. Perceptions of Poverty in Geek Culture: A Weasley Case Study.

Pop culture has a weird relationship with poverty. 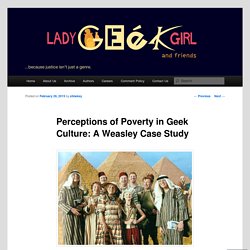 You’d think that geek culture would be pretty good at portraying poverty; we’re seeing more and more strides towards inclusivity and greater representation of all people from all backgrounds. Yet socio-economic issues are heavily charged with politics, and our political beliefs shape the way we perceive reality. They shape the kinds of pop culture media we create, and as David Wong’s recent Cracked article explains, popular culture doesn’t seem to believe that actual, real-world poverty really exists, just a sort of nebulous feeling of being poor while occupying the middle class, and actual financial consequences of a character’s actions aren’t ever really addressed.

Most of the time, shows don’t even acknowledge any of the consequences of property damage, let alone address the financial ones. We’re happy when the superhero defeats the monster, but who’s going to pick up the tab now that the city looks like it’s been bombed?