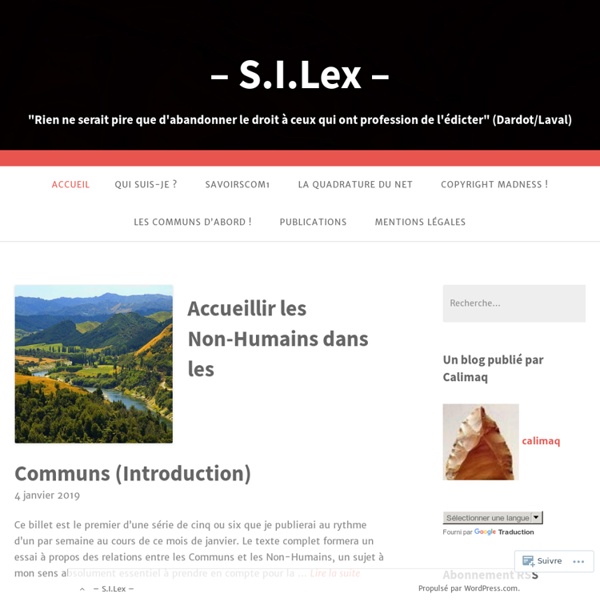 People power transforms the web in next online revolution In July 2004, US cinema advertisements for Halo 2, the science fiction computer game, briefly carried the address for a website - ilovebees.com - which appeared to belong to a beekeeper who had mysteriously disappeared. Her honey-based recipes had been replaced by an apparently random list of numbers. Over four months 600,000 people joined in solving the mystery of what the numbers meant. What unfolded was a striking display of 'We Think': structured, mass collaborative creativity and intelligence. De la bibliothèque à la bibliosphère There are many different forms of energy. In this article on going to talk about a few of the more popular forms of energy, heating and power sources. Solar water heating solar water heating technologies mainly based on flat plate collectors, which absorb solar energy that raises the temperature of the water running through them to between 60°C and 80°C. The hot water can be used for various applications in homes, hotels, nursing homes, hospitals, and many other places.

5 Free Online Tools to Create Your Own Infographics Infographics and data visualizations have become incredibly popular ways to impart information while keeping your audience engaged. As a result, a slew of user-friendly, free online applications have been created which enable users to create their own information graphics. Here are five such tools that I think are particularly valuable: thelowsandthehighs.co 10 Feb swefn: Listings for forthcoming events at Electric Knife. I’m playing in the daytime on Sat 22nd - That event will finish in time for people to get to the Japanese noise fest at Cafe Oto which is also on over that weekend. Just Published: Cigar Advisor Instructions For Building A Coolerdor Easton, PA (PRWEB) May 18, 2013 The all-new Cigar Advisor is an online cigar magazine that brings a fresh, irreverent, and down-to-earth perspective on all things cigars to thousands of smokers. In addition to educational cigar content and behind-the-scenes cigar industry articles from some of the business’s top names, Cigar Advisor delivers an array of content about a variety of topics of interest to people who enjoy the cigar lifestyle. The magazine also features cigar reviews and ratings submitted by real smokers.

5 Myths About the 'Information Age' - The Chronicle Review By Robert Darnton Confusion about the nature of the so-called information age has led to a state of collective false consciousness. It's no one's fault but everyone's problem, because in trying to get our bearings in cyberspace, we often get things wrong, and the misconceptions spread so rapidly that they go unchallenged. Taken together, they constitute a font of proverbial nonwisdom. Five stand out: 1. Best Practices for Content Curation for Nonprofits at Social Media for Nonprofits Conference On January 30th, I’m speaking at the Social Media for Nonprofits in New York City. (You can get a discount of $20 off the registration by entering the code “Beth” when you sign up although the discount only works on the more expensive tickets). This year, since content curation, is a social media competency that I’m focusing in my own learning and teaching , I’ll be doing a conversational presentation on the topic. Robin Good, one of the best content curators on the planet, will join me via skype from Italy. In preparation, I’m doing a pre-recorded skype interview with Robin as a back up for a live interview. As is my presenting style, this will be an interactive session.

Avantgarde-Metal.com It's a great pleasure to welcome to the fold of the Avantgarde-Metal.com crew our newest member, David Sano! His first descent into the maelstrom of avantgarde metal music is this review of PRELUDIUM's Redemption. Enjoy! Medusa In Greek mythology Medusa ("guardian, protectress")[1] was a monster, a Gorgon, generally described as having the face of a hideous human female with living venomous snakes in place of hair. Gazing directly upon her would turn onlookers to stone. Most sources describe her as the daughter of Phorcys and Ceto,[2] though the author Hyginus (Fabulae, 151) interposes a generation and gives Medusa another chthonic pair as parents.[3] Medusa was beheaded by the hero Perseus, who thereafter used her head as a weapon[4] until he gave it to the goddess Athena to place on her shield.

Piracy adding to publishers' digital costs 11.04.11 | Philip Jones The escalating costs of fighting piracy and the need to recruit experts from outside the publishing sector are among the reasons publishers are resisting increasing royalty rates on digital books, delegates at the London Book Fair's digital conference heard. In a discussion on how publishers could continue to add value to authors in the digital age, Little, Brown publisher David Shelley warned an e-book could be as easily pirated as an MP3 and publishers had to invest in technology and expertise in order to defeat the pirates. He said these "unknown" costs would replace the costs removed as publishers printed fewer books and sold more in digital. He said: "Money spent on print and paper will be spent on specialists to fight piracy and that is a team of many people.