How to write a book - Now Novel 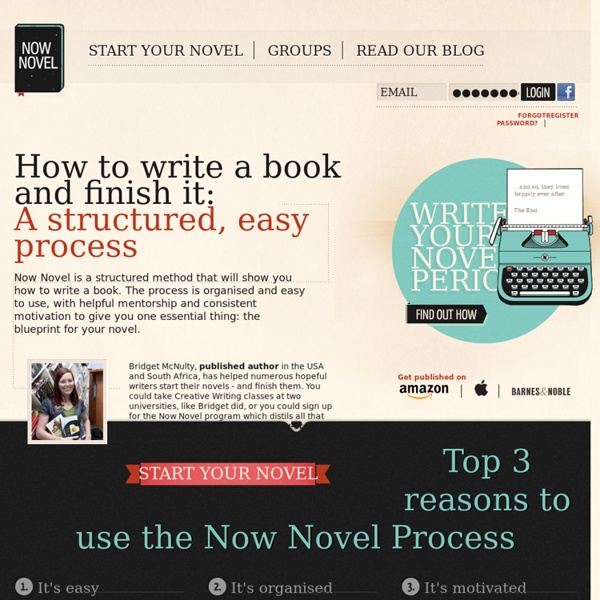 Artful Storytelling INTERNET ENCYCLOPEDIA OF CINEMATOGRAPHERS List Over 300 Ways to Say How To Write A Novel Using The Snowflake Method Writing a novel is easy. Writing a good novel is hard. That’s just life. If it were easy, we’d all be writing best-selling, prize-winning fiction. Frankly, there are a thousand different people out there who can tell you how to write a novel. In this article, I’d like to share with you what works for me. This page is the most popular one on my web site, and gets over a thousand page views per day, so you can guess that a lot of people find it useful. Good fiction doesn’t just happen, it is designed. For a number of years, I was a software architect designing large software projects. I claim that that’s how you design a novel — you start small, then build stuff up until it looks like a story. If you’re like most people, you spend a long time thinking about your novel before you ever start writing. But before you start writing, you need to get organized. Step 1) Take an hour and write a one-sentence summary of your novel. Some hints on what makes a good sentence: Shorter is better.

23 Fiction Writing Ideas That Will Revitalize Your Story Posted by Melissa Donovan on September 29, 2015 · Refresh your story with these fiction writing ideas. Sometimes our fiction writing projects dry up. The characters turn out to be flat, the plot becomes formulaic, and the story suddenly seems lackluster. This is when a lot of writers give up and file their half-finished manuscripts into a bottom drawer never to be seen again. Before giving up on a project, why not try to resurrect it? Fiction Writing Ideas Today’s writing ideas will help you enhance stories that are suffering from a variety of maladies ranging from boring plots to unrealistic characters. Give your characters more than a goal. Got Any Fiction Writing Ideas? Got any tips or ideas to add? About Melissa DonovanMelissa Donovan is a website designer and copywriter.

EN TUS BRAZOS Ultracrepidarianism Ultracrepidarianism is the habit of giving opinions and advice on matters outside of one's knowledge. The term ultracrepidarian was first publicly recorded in 1819 by the essayist William Hazlitt in an open Letter to William Gifford, the editor of the Quarterly Review:[1] "You have been well called an Ultra-Crepidarian critic."[2] It was used again four years later in 1823, in the satire by Hazlitt's friend Leigh Hunt, Ultra-Crepidarius: a Satire on William Gifford. The term draws from a famous comment purportedly made by Apelles, a famous Greek artist, to a shoemaker who presumed to criticise his painting.[3] The Latin phrase "Sutor, ne ultra crepidam", as set down by Pliny and later altered by other Latin writers to "Ne ultra crepidam judicaret", can be taken to mean that a shoemaker ought not to judge beyond his own soles. Notes[edit] References[edit] Bergman, Gregory, Isms, Adams Media, 2006. External links[edit] An essay by Hazlitt on William Gifford.Online version of J.B.