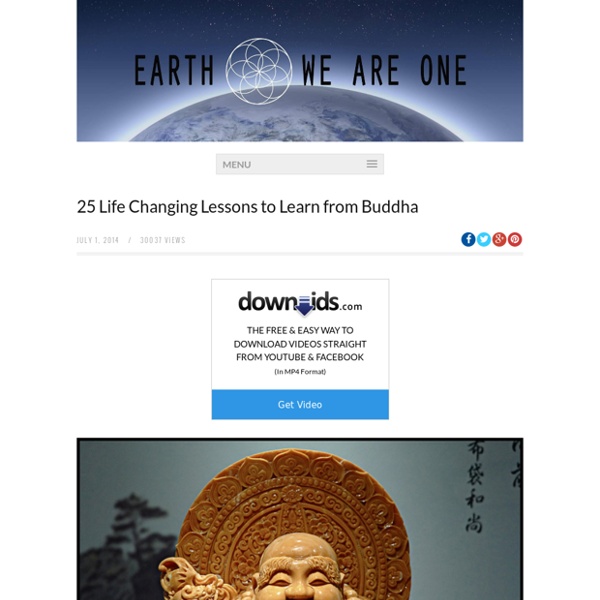 “If we could see the miracle of a single flower clearly, our whole life would change.” ~ Buddha There are so many beautiful, powerful and life changing lessons I have learned from studying Buddhism and from reading many of Buddha’s quotes. And today I want to share 25 of these beautiful lessons with you. Here are 25 Life Changing Lessons from Buddha: “Hatred does not cease by hatred, but only by love; this is the eternal rule.” “A man is not called wise because he talks and talks again; but if he is peaceful, loving and fearless then he is in truth called wise.” “A dog is not considered a good dog because he is a good barker. “Do not dwell in the past, do not dream of the future, concentrate the mind on the present moment.” “The secret of health for both mind and body is not to mourn for the past, nor to worry about the future, but to live the present moment wisely and earnestly.” “The way is not in the sky. “Words have the power to both destroy and heal. “You only lose what you cling to.”

How To Develop The Four Primary Skills Of All Meditation by Paul Cavel Emancipation or freedom from slavery and bondage is ultimately what the human spirit craves. From the perspective of your spirit, slavery encompasses how the attachments in your life—such as sex, material items, money, power and all that they bring—prevent you from being free. OED birthday word generator: which words originated in your birth year? Do you know which words entered the English language around the same time you entered the world? Use our OED birthday word generator to find out! We’ve scoured the Oxford English Dictionary (OED) to find words with a first known usage for each year from 1900 to 2004.

The Storm Before the Calm AngelicView: This article in it’s entirety is shared from Neale Donald Walsch’s Facebook page. He has over 412,000 “Likes”, so I assume some people have already read it. Neale Donald Walsch is the author of the Conversations with God books, which I have posted here in Audio form for free. I have added the pictures. Is this the world's happiest man? Brain scans reveal French monk found to have 'abnormally large capacity' for joy, and it could be down to meditation Brain scans reveal Buddhist monk Matthieu Ricard has largest capacity for happiness ever recordedMeditation 'completely changes your brain and therefore changes what you are', says 66-year-oldHe says you can do it too by learning how to let your thoughts drift By Claire Bates Published: 10:41 GMT, 31 October 2012 | Updated: 14:32 GMT, 31 October 2012 Ricard: 'Meditation is not just blissing out under a mango tree but it completely changes your brain' A French genetic scientist may seem like an unusual person to hold the title - but Matthieu Ricard is the world's happiest man, according to researchers.

How to communicate like a Buddhist — mindfully and without judgment (iStock) There’s a lot that used to frustrate me about communicating. Well, if I’m honest, it was that I didn’t know how to do it. I knew how to speak and string words together, but no one ever sat me down and taught me the purpose of communication or how to effectively express myself so I was heard and how to listen so I could understand. A lot of times it seemed that because I knew how to talk, that automatically meant I should know how to communicate. Let’s be honest, communicating effectively is hard to do, especially in heated situations. 20 mental barriers you should let go of photo by admitchell08 You are in an imaginary hot air balloon. It’s just you and all of your belongings in the wicker basket. Something went wrong and you are losing altitude fast. You will hit the ground in less than ten minutes if you don’t come up with something quick. The only immediate solution is to get rid of excess weight and throw off at least half of your belongings.

You Are God: The True Teachings of Jesus By Brandon West, The Mind Unleashed In this article we will explore how the true teachings of Jesus can be summed up by three little words: you are God. Some missionaries came to my house the other day and I was given the opportunity to come face to face with the religious mind, to discover their relationship to God, and to remember my own (non-voluntary) experience with religion. In such a short time though it was, it was absolutely clear that the foundational flaw of religion based off of the bible as it is primarily taught today (and in general, for the past 2000 years), is that it teaches first and foremost that we are separate from this force called God.

The logic of Buddhist philosophy – Graham Priest Western philosophers have not, on the whole, regarded Buddhist thought with much enthusiasm. As a colleague once said to me: ‘It’s all just mysticism.’ This attitude is due, in part, to ignorance. But it is also due to incomprehension. When Western philosophers look East, they find things they do not understand – not least the fact that the Asian traditions seem to accept, and even endorse, contradictions. One Simple Way to Trick Your Body Into Aging Well By Soriyya Bawa Guest Writer for Wake Up World Stress and aging are inevitably linked. Aging can lead to more stress and more stress, in turn, can speed up the aging process. A lot of men and women spend so much of their time and energy worrying about aging well that they’re actually accelerating the process.

List of Things to Dispose Of Cleaning out clutter can be a tough task, especially if you have been letting it build up for a while. Instead of setting aside a huge block of time to take care of months' or years' worth of clutter, take baby steps by throwing away only one type of item a day. And by throwing away, I mean recycling, selling, donating, or — as the last resort — trashing. Self Love Isn't Selfish > Ann Albers My dear friends, we love you so very much, Self love is not selfish dear ones! Self love is an acknowledgment of the beautiful Divine love that creates you, a state of living in truth, a life in which you say, "Yes," to God, "Yes" to self, "Yes" to the universe. It is a state of being in which you acknowledge the fact that you were created by a Love so pure and powerful that you could not possibly be flawed in any way.

Neuroplasticity: The 10 Fundamentals Of Rewiring Your Brain Neuroplasticity has become a buzzword in psychology and scientific circles, as well as outside of them, promising that you can “re-wire” your brain to improve everything from health and mental wellbeing to quality of life. There’s a lot of conflicting, misleading, and erroneous information out there. So, exactly how does it work? Via: Thawornnurak and Ioan Panaite | Shutterstock What Is Neuroplasticity Just in case you’ve managed to miss all the hype, neuroplasticity is an umbrella term referring to the ability of your brain to reorganize itself, both physically and functionally, throughout your life due to your environment, behavior, thinking, and emotions.