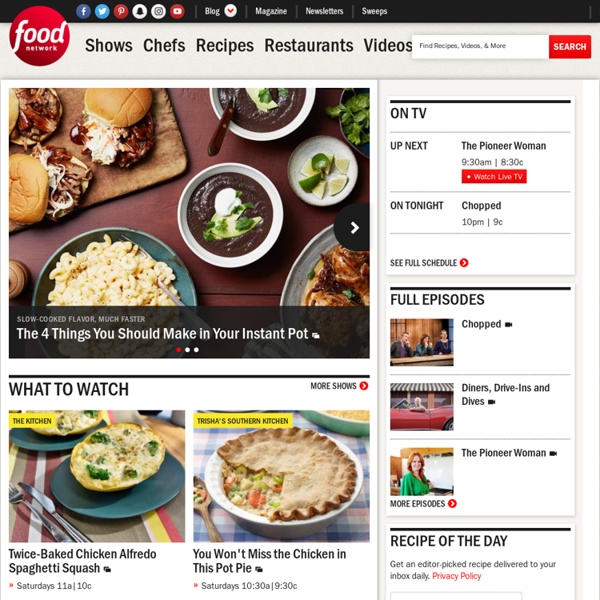 50+ iPad Resources You Might Have Missed Apple's iPad is the little device that could. Any scepticism about Apple's tablet technology was largely erased as the iPad took touchscreen technology to a larger, more robust high. We've tracked the iPad through its first months in public hands with a slew of features and resources. We've here collected some of our best — sometimes bizarre — resources for you to get all caught up. Whether you're looking for the best business apps, need some decals to trick out your device, or just want to see if your iPad works in space — this collection of more than 50 iPad resources is sure to suit your needs. Crepe Recipe - Basic Crepe Batter Recipe 0Google + The world's best crepe recipe begins with the perfect crepe batter. Read along for the world's most comprehensive list of the most delicious and fool-proof batters for your crepe recipes, including savory and sweet crepes. Savory Crepe Batters

encyclopedia of spices Spice Advice – how to make the most of spices, which spices to use with particular foods, when to add them, grinding, storage and more. Herbs and Spices Fight Disease — Most of us look at spices as a way to perk up the plate but are you aware of their potential to fight disease? Look here for some recent findings.

Drunken Irish Stew It’s freezing here in Phoenix! I woke up this morning and it was 40 degrees! I didn’t know what to do with myself; I can barely get out of bed! It’s nice, though, being able to wear my coats and boots without feeling like a complete idiot. That’s why I figured that I had better make some stew while the weather lasts, as I’m sure it will be back in the 80s in a few weeks. 100 Ways to Use Strawberries Strawberry season comes but once a year, and before you know it, you’ve spent way too much at the farmers’ market buying an entire flat of them, only to panic when you remember they go bad faster than bananas. So what to do with all those juicy little red guys? Oh we’ve got your covered…

Dates & Palm Trees - Saudi Arabia - Facts Types & Nutrition Historical facts Saudi Arabia is the home land of the Date Palm Tree. With more than 10000 years of age it is one of the oldest trees in the world. Many nations transferred the palm trees from Saudi Arabia (used to be called Arabian Peninsula) to other places in the world after they became amused by its charming beauty and its endless generosity. For example, the great Alexander was the first to introduce palm trees to Pakistan. Peanut Butter "Cheese Ball" I wasn’t kidding when I said I’ve been obsessed with peanut butter lately. But I think I’ve finally satisfied my craving. I made this peanut butter cheese ball for a get together last weekend that ended up getting canceled at the last minute. Christmas Rocky Road Heavenly Hash ~ Cajun Chef Ryan On my daily commute to and from work, I typically listen to NPR radio for the majority of my news fix, which makes up for the lack of getting the daily print newspaper, and I rarely watch the news on the tele anymore either. One of the NPR treats that I enjoy is the food features that I happen to catch including updates from Nigella Lawson and the Kitchen Sisters, among others they will broadcast. On November 30, 2009, NPR featured Nigella promoting her Nigella Christmas cookbook and in particular, I was fascinated with her new take on a rocky road dessert treat. The original recipe can be found at the story titled: Nigella Offers Simple Recipes For Holiday Cheer.

Potatoes Romanoff – A Fancy Twice Baked Potato I’m totally ready for fall. I’m ready for super comforting meals that I get to eat while sitting at home, in my sweat pants, with my slippers on! And I’m ready for Thanksgiving.

cant wait to try out some recipes!! by emilyhsu Jul 4

your great! <3 noooo problemo! by saltyelephant May 18