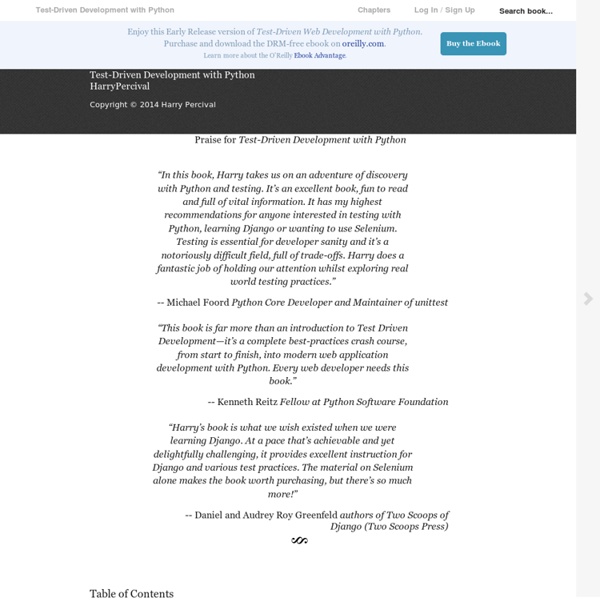 Test-Driven Development with Python Test-Driven Development with Python Harry Percival Gillian McGarvey Rebecca Demarest Wendy Catalano Randy Comer David Futato Copyright © 2014 Harry Percival Printed in the United States of America. O’Reilly books may be purchased for educational, business, or sales promotional use. Nutshell Handbook, the Nutshell Handbook logo, and the O’Reilly logo are registered trademarks of O’Reilly Media, Inc. Many of the designations used by manufacturers and sellers to distinguish their products are claimed as trademarks. While every precaution has been taken in the preparation of this book, the publisher and authors assume no responsibility for errors or omissions, or for damages resulting from the use of the information contained herein. Praise for Test-Driven Development with Python Table of Contents © 2013, O’Reilly Media, Inc.

1.3. A Quick Tour — Buildbot 0.9.12 documentation 1.3.1. Goal This tutorial will expand on the First Run tutorial by taking a quick tour around some of the features of buildbot that are hinted at in the comments in the sample configuration. Making good use of random in your python unit tests Writing efficient UnitTest to validate that your code performs as expected is a difficult endeavor. Lot has been written about the benefits of Test Driven development and on how to best approach testing, and lot can be learned reading the available litterature. One thing however that we don’t see often mentionned is that architecting efficient UnitTest is pretty hard and that no tools or testing framework are of much value without a fair understanding of the code base that needs to be tested. The techniques we will be briefly introducing now are no different. You may use them to impress your colleagues and show them TestSuite you have just written that contains millions of tests.

PyQt4 tutorial This is PyQt4 tutorial. The tutorial is suited for beginners and intermediate programmers. After reading this tutorial, you will be able to program non trivial PyQt4 applications. PyQt5 tutorial is the successor of this tutorial. Table of contents E-book Text Processing in Python (a book) A couple of you make donations each month (out of about a thousand of you reading the text each week). Tragedy of the commons and all that... but if some more of you would donate a few bucks, that would be great support of the author. In a community spirit (and with permission of my publisher), I am making my book available to the Python community. Minor corrections can be made to later printings, and at the least errata noted on this website.

An Extended Introduction to the nose Unit Testing Framework Welcome! This is an introduction, with lots and lots of examples, to the nose unit test discovery & execution framework. If that's not what you want to read, I suggest you hit the Back button now. The latest version of this document can be found at (Last modified October 2006.) Python Programming Python Programming From Wikibooks, open books for an open world Jump to: navigation, search This book describes Python, an open-source general-purpose interpreted programming language available for a broad range of operating systems. There are currently three major implementations: the standard implementation written in C, Jython written in Java, and IronPython written in C# for the .NET environment. There are two common versions currently in use: 2.x and 3.x.

introduction to python - Random stream This is the material which I use for teaching python to beginners. tld;dr: Very minimal explanation more code. Python? Interpreted languageMultiparadigm Introduction What's in a transport layer? Microservices are small programs, each with a specific and narrow scope, that are glued together to produce what appears from the outside to be one coherent web application. This architectural style is used in contrast with a traditional "monolith" where every component and sub-routine of the application is bundled into one codebase and not separated by a network boundary. In recent years microservices have enjoyed increased popularity, concurrent with (but not necessarily requiring the use of) enabling new technologies such as Amazon Web Services and Docker. In this article, we will take a look at the "what" and "why" of microservices and at gRPC, an open source framework released by Google, which is a tool organizations are increasingly reaching for in their migration towards microservices.