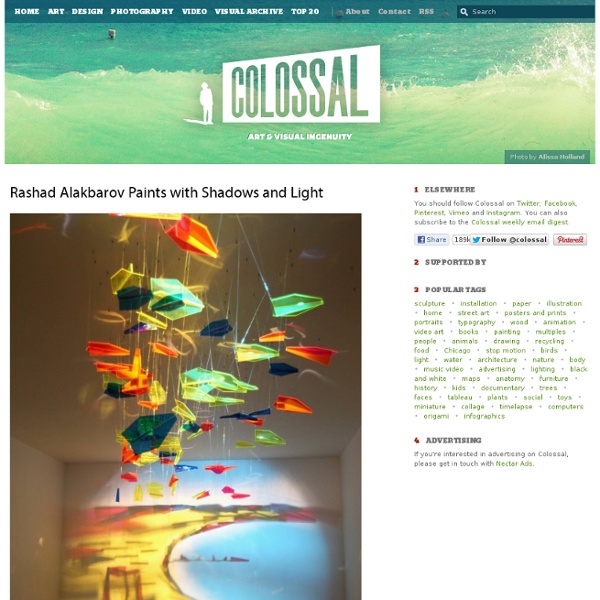 This is kind of flying all over the internet right now, but I couldn’t resist sharing. Artist Rashad Alakbarov from Azerbaijan uses suspended translucent objects and other found materials to create light and shadow paintings on walls. The jaw-dropping light painting above, made with an array of colored airplanes is currently on view at the Fly to Baku exhibition at De Pury Gallery in London through January 29th. (via art wednesday, fasels suppe)

Riusuke Fukahori Paints Three-Dimensional Goldfish Embedded in Layers of Resin First: watch the video. Japanese artist Riusuke Fukahori paints three-dimensional goldfish using a complex process of poured resin. The fish are painted meticulously, layer by layer, the sandwiched slices revealing slightly more about each creature, similar to the function of a 3D printer. A Giant Mirrored Building Facade Turns Anyone into Spiderman How fun is this? Bâtiment (Building) is a mirrored installation by artist Leandro Erlich currently on display at Le 104 in Paris as part of their In_Perceptions exhibition. The piece is clever in its simplicity: a massive building facade is constructed on the floor near a towering mirror giving anyone reflected the uncanny appearance of being weightless. Optical illusions are familiar territory for Erlich, whose pool installation appears to plunge air-breathing gallery patrons several feet underwater. Bâtiment is on display through March 2012. (via present and correct, lonely planet)

Anja Rubik & Sasha Pivovarova by Mert & Marcus for Vogue Paris We're sorry, but the page you are looking for doesn't exist. Air France Takes Flight–Paying homage to its French heritage, Air France has launched a new campaign featuring a modern take on France. The advertisements photographed by Sofia Sanchez and Mauro Mongiello of Art Dept. Europe have the slogan “Air France, France is in the Air”. The images feature notable fashion models including Ali Michael, Bette Franke, Shanina Shaik and more with a focus on not only France but other notable destinations like Brazil, New York and San Francisco.

Tzviatko Kinchev - Draw As A Maniac Tzviatko Kinchev is born in Sofia, Bulgaria and he is an extraordinary talented young man. He is studing in The National Academy of Arts and also working for Haemimont Games as an 2D artist. Check out his works and how he uses a great colorful palette of warm colors. Chek him at facebook Book Sculptures by Bronia Sawyer The abundance of book sculpture I’ve seen online lately is staggering, however it was refreshing to discover the work of UK-based Bronia Sawyer who colors, folds, and rolls the pages of books to create these bird and flower-like plumes of color. Via her site: I love to take something like a book and turning it in to something visually pleasing. With book sculpture I like the fact that books are flat and square they have order but by cutting them and folding them you can create organice and random shapes. I also like to add colours but mainly for the way it looks in photographs.