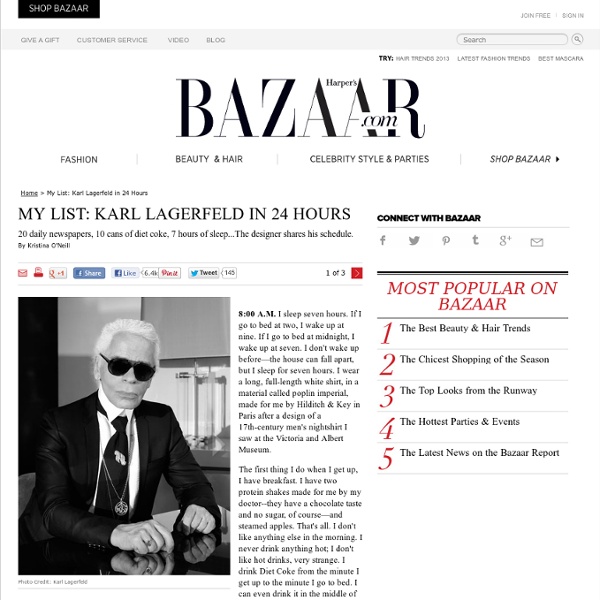 8:00 A.M. I sleep seven hours. If I go to bed at two, I wake up at nine. The first thing I do when I get up, I have breakfast. Related Story: Our Favorite Spring/Summer Haircuts I do most of my reading in the morning. 11:00 A.M. As told to Kristina O'Neill

The Most Influential People in Fashion -- New York Magazine Anna WintourEditor-in-chief, VogueVogue, c’est moi. No fashion figure has ever played her power as strongly and cannily as the feared, respected, sharply intelligent Wintour. She can make a fledgling’s career in a single phone call (designers from John Galliano to Zac Posen owe her a debt of gratitude), anoint the next society muse (Lauren duPont, Jessica Joffe), and raise millions for her favorite causes ($26 million for the Met’s Costume Institute in the past eleven years, $14 million for various AIDS charities). Peter MarinoArchitect The premier set designer for the luxury-shopping experience, ever since he did Barneys’ uptown flagship back in 1992. Kim FranceEditor-in-chief, Lucky With Lucky, France has broken the wall between magazine and catalogue—and thus changed how clothes are bought and sold, all the way to the factory floor. Marc JacobsHead designer, Marc Jacobs International Quietly, modestly, totally, Marc Jacobs has taken over.

Rihanna is Fighting to Trademark Her Own Name — The Fashion Law Rihanna, whose real name is Robyn Rihanna Fenty, is in the midst of a battle with DC Comics to trademark her first name. Turns out, in June 2014, the superstar singer, by way of Roraj Trade LLC (the company that holds the rights to her intellectual property) filed to federally register the term "Robyn" in the class of goods/services in connection with “providing on-line non-downloadable general feature magazines." So, it appears Rihanna wants to use her real name in association with an online magazine venture. Enter: DC Comics, the American comic book giant, which has been responsible for publishing Batman since the 1930's and which has held a trademark registration for "Robin" (Batman's sidekick) for action figures and for comic books for years now. As a result, DC Comics is asking the U.S. Patent and Trademark Office to keep the singer from registering her Robyn mark, as it is confusingly similar to DC's trademark.

The 25 most powerful people in fashion Fashion You've landed on our old Fashion site Visit our new Fashion or Beauty sites for the latest articles Paris Fashion Week 2016 High Street Hits Latest Fashion News Latest Beauty News Picture: Next The 25 most powerful people in fashion by untitled co Chanel Pictures And Quotes Douglas Kirkland 20 November 2014 Lauren Milligan A NEW book of Coco Chanel pictures - taken over just three weeks in 1962 by photographer Douglas Kirkland - shows a new side to the formidable and brilliant "Mademoiselle". Kirkland, who spent 21 days with Chanel in her apartment in the Ritz, at the studio preparing for a catwalk show, and on a weekend trip to Versailles, revealed that he built a friendly relationship with the designer - but never saw her remove her signature hat. Related Gallery "I assumed, like many French people at the time, that she didn't speak English," Kirkland explains in the book. Kirkland - who has photographed stars including Angelina Jolie and Marilyn Monroe - is releasing 100 copies of a deluxe limited-edition version of the book, complete with a signed print, priced at $250, while the standard edition will retail at $50. Containing 118 black and white images of the iconic designer, Coco Chanel: Three Weeks/1962 is available now.

untitled Style: ASAP Rocky x DKNY in new Donna Karan campaign Okayplayer The world of style has no rules but it was still an astonishing surprise to discover ASAP Rocky, prominently featured in DKNY‘s last campaign, fitting in perfectly in the crowd of renowned models ( Cara Delevingne, Jourdan Dunn, Eliza Cummings and Dylan Rieder). Shot in October, the spot takes place around a yellow taxi cab in New York’s key location place: Times Square. Freshly dipped in a series of well-tailored suits, Rocky exuded confidence and charisma–and was definitely a good catch by DKNY. The “Fashion Killa” has, of course, previously weighed in on style matters and in an appearance on Teen Vogue said: “Every day I get dressed based upon mood, how I’m feeling. You come a long, way Rocky.