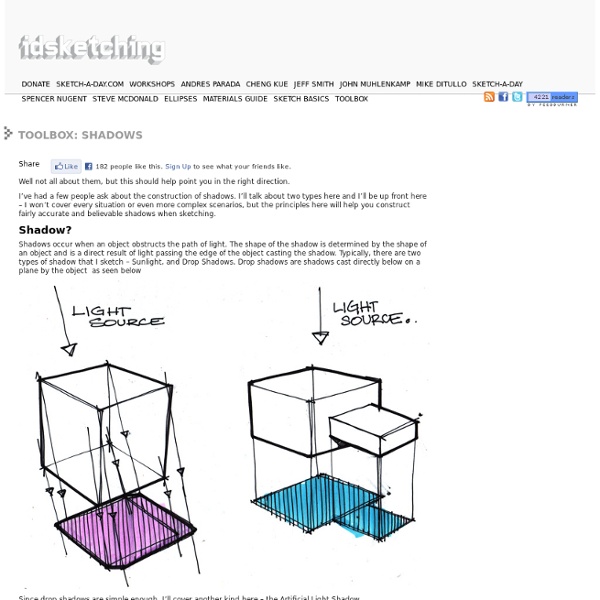 Well not all about them, but this should help point you in the right direction. I’ve had a few people ask about the construction of shadows. I’ll talk about two types here and I’ll be up front here – I won’t cover every situation or even more complex scenarios, but the principles here will help you construct fairly accurate and believable shadows when sketching. Shadow? Shadows occur when an object obstructs the path of light. Since drop shadows are simple enough, I’ll cover another kind here – the Artificial Light Shadow. Before we continue, if you’re into the more technical of explanations, you can check out this website. Natural Light Shadow Technically speaking, there is no difference between an artificial light source and a sunlight source. See more after the break… Since the difference is negligible, we will assume the light rays in our sketches to be parallel as well. Artificial Light Shadow Well, hope this covers some simple shadow tips.

Romantically Apocalyptic - 63 11 comic-book superteams worthy of a shot at big-screen glory With Marvel releasing The Avengers next year and DC slowly but surely progressing to an eventual Justice League movie, we thought it was worth looking at some other collections of superpowered studs to see who else could thrive on the silver screen. Runaways Marvel Comics There has been a Runaways movie in development for some time now, but hopefully the title created by Y: The Last Man's Brian K. Vaughan—about a group of superpowered teens who hit the road after learning that their parents are the world's greatest villains—finds its way out of development hell. Birds of Prey DC Comics Even though Chuck Dixon wrote the first 50-some-odd issues of this femme-centric tem book, Birds of Prey really flowered once Gail Simone took it over in 2003. The League of Extraordinary Gentlemen America's Best Comics Yes, there was already an incredibly dumb movie based on Alan Moore and Kevin O'Neil's comic. Suicide Squad Villains. Sgt. Once upon a time, war books were a staple of comics publishing.

New Spectacular Skateboard Artwork by Haroshi Japanese artist Haroshi creates some truly impressive sculptures out of a very uncommon medium. By taking old, broken, or abandoned skateboards, he repurposes them for his artwork. We've featured his stellar pieces before, and now he's back with some more incredible recycled skateboard deck works. The new set features astounding and colorful carvings of a fire hydrant, a full length arm, an enormous skateboard wheel, a playable guitar, and an unfinished dog head. Haroshi's website via [Daily Du Jour]