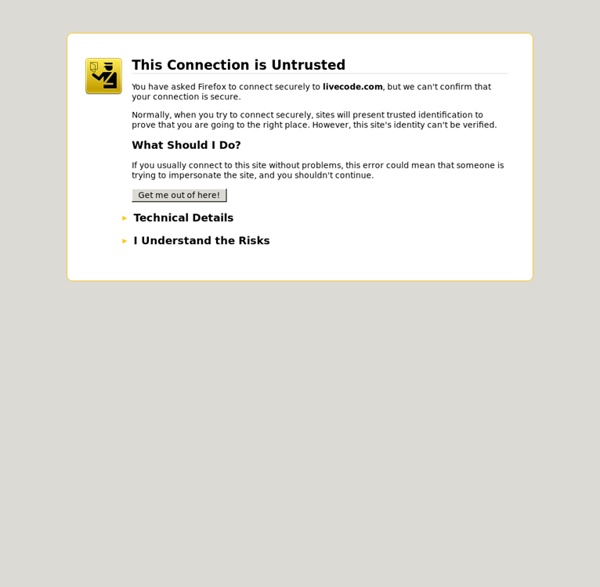 Teaching Coding (For Teachers who Can't Code) According to a recent study by Code.org, the vast majority of schools in the US do not provide a rigorous computer science curriculum ( One skill that is critically ignored in schools is the actual coding of computers, with many computer science skills focusing instead on office skills like using Microsoft Word and Powerpoint. In fact, 90% of American schools don’t even discuss computer programming! While office skills are necessary, this neglect is a dangerous position for America’s students to be in. Learn Play, Design & Code Retro Arcade Games Grades 2+ | Blocks CS First Unplugged Grades 2-8 | Blocks, Unplugged, Scratch Discover Python with Silent Teacher Grades 6+ | Python

Formatting ebooks - EPUB Straight to the Point When Apple presented iBooks on the iPad on January 27, 2010, I was very excited to see that they had adopted the standard EPUB format. But I especially wanted to know how they had created the beautiful EPUB format of Winnie the Pooh, and how they made it look so lovely on that gorgeous iPad. I decided to write a book on how to create EPUB format ebooks. My book about creating ebooks in EPUB format has garnered rave reviews.

Cargo-Bot – iPad The first game programmed entirely on iPad® Be Logical. Play Cargo-Bot Presenting Cargo-Bot. The first game programmed entirely on iPad using Codea™ Programming With Blocks Syntax is a royal pain in the neck for beginning programmers. For a lot of kids learning computing or programming syntax is the single largest hurtle. It’s hard to teach both a new (programming) language and a new way of thinking and problem solving at the same time. This tends to be a big stumbling block for teaching a lot of basic computing concepts. For years there have been tools developed that remove syntax from the equation. Alice and Scratch are probably the most well-known and popular of these tools. Taking Screenshots with Kindle Fire Renumbered at 4:02pm; Updated 3:47pm, thanks to corrections made by Wangen. (The mistakes were mine, not Erica’s.) Thanks, Wangen! I just got off the phone with Erica Sadun, geek girl extraordinaire, who had posted instructions yesterday on how to take screenshots on a Kindle Fire but who kindly walked me through the process today. I'll explain what she told me in case you too are interested.

Kids must code on iPads An important 21st Century skill This post is about a topic and app close to my heart. Computer programming is the engine of modern life and dream maker for tens of thousands. Gifts for User Experience Geeks 2011 Gifts for User Experience Geeks 2011Nov 28th, 2011 It is time for another installment of Gifts for User Experience Geeks! Just in time for the 2011 holiday season. Be sure to check out the last three years (2008, 2009, and 2010). This list is a collection of items I have come across over the last year that would make the ideal gifts for UX geeks like Information Architects, Usability Specialists, Interaction Designers, and even Web Designers. I also put the call out to several of my colleagues to contribute suggestions and I have included those where I felt they were a good fit.

Learning Interface roundtable debrief The 2011 Learning Technology Research Fest, held annually at the CoCo Research Centre in Sydney, was as stimulating and spirited as last year, and this year's roundtable menu featured two sessions on learning interfaces. These roundtables emphasized the general agreement that this area needs special attention and gave some glimpses into the future of learning interfaces... The first roundtable, "Designing Interfaces for Learning", I hosted together with Catherine Caws from the University of Victoria in Canada, and it drew a crowd of Education designers, researchers, engineers and Web developers.