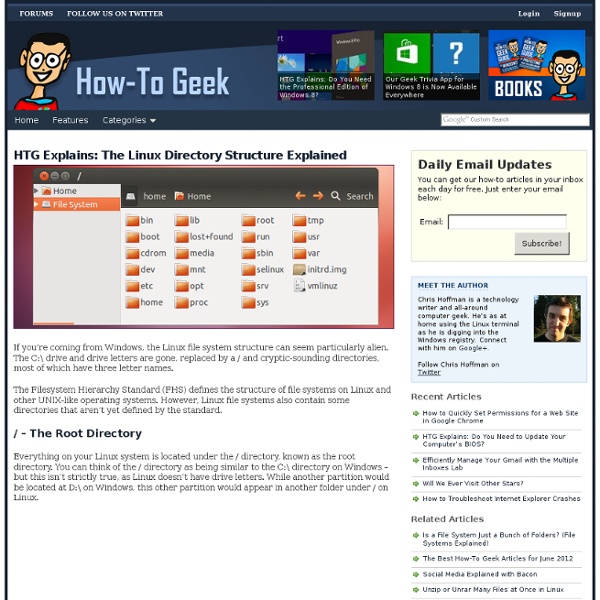 If you’re coming from Windows, the Linux file system structure can seem particularly alien. The C:\ drive and drive letters are gone, replaced by a / and cryptic-sounding directories, most of which have three letter names. The Filesystem Hierarchy Standard (FHS) defines the structure of file systems on Linux and other UNIX-like operating systems. However, Linux file systems also contain some directories that aren’t yet defined by the standard. / – The Root Directory Everything on your Linux system is located under the / directory, known as the root directory. /bin – Essential User Binaries The /bin directory contains the essential user binaries (programs) that must be present when the system is mounted in single-user mode. /boot – Static Boot Files The /boot directory contains the files needed to boot the system – for example, the GRUB boot loader’s files and your Linux kernels are stored here. /cdrom – Historical Mount Point for CD-ROMs /dev – Device Files /etc – Configuration Files

Three Ways To Access Linux Partitions (ext2/ext3) From Windows On Dual-Boot Systems Version 1.0 Author: Falko Timme <ft [at] falkotimme [dot] com> Last edited 12/20/2007 If you have a dual-boot Windows/Linux system, you probably know this problem: you can access files from your Windows installation while you are in Linux, but not the other way round. This tutorial shows three ways how you can access your Linux partitions (with ext2 or ext3 filesystem) from within Windows: Explore2fs, DiskInternals Linux Reader, and the Ext2 Installable File System For Windows. While the first two provide read-only access, the Ext2 Installable File System For Windows can be used for read and write operations. I do not issue any guarantee that this will work for you! 1 Explore2fs In Windows, open a browser and go to (JavaScript must be enabled in your browser to view the large image as an image overlay.) ... and unpack it. The Explore2fs filebrowser starts; you can now browse your Linux partitions and copy&paste files to your Windows partition: 4 Links

Blog Archive » Who Needs a Computer Science Degree When There’s Wikipedia? Update1 [6/25/08]: Welcome Stumblers Update 2 [11/20/08]: I stumbled on this GREAT list of Algorithms, highly recommended reading. I was looking up a computer science term on Wikipedia the other week and as is wont to happen, one thing led to another and I was about 5 or 6 articles deep on a trail of discovery and research to build up my knowledge. As I realized I was randomizing myself and getting way off the original track, I decided to start assembling the links in one location for my own reference if not some other geek without the funds for their own degree. Yes, there’s much more that I don’t have below, I wound up throttling back quite a bit after a while to leave it as is…for now. History: Extra Credit: Animated Sorting Algorithm Demos Languages: Computer Science Fields: General CS articles: Mathematical foundations Mathematical logic Boolean logic and other ways of modeling logical queries; the uses and limitations of formal proof methods. Number theory Graph theory Type theory Category theory

50 Skills Every Real Geek Should Have - Page 1 Back in our September 2008 issue, we published a list of 9 Skills Every Nerd Needs – a lighthearted examination of the essential abilities Maximum PC readers should have in their geek arsenal. We still stand by that list, but we were somewhat one-upped last month when we saw that Gizmodo had since run its own list of 50 key geek skills. Their list was very respectable, but we thought that we could do better by not only expanding and refining our original story, but actually teaching you these skills. The highest echelon of geeks will be able to do everything in this list, and this is by no means a full categorization of the complete geek skillset – only what we consider to be the most indispensable abilities. Have anything to add to our list? Name These Connectors! Finding hidden hardware gems in bins of archaic cards at computer shows and swap meets is an ever-so-crucial nerd skill. A. Run All Your Essential Apps on a USB Stick Straighten the Pins on an Older CPU

Dijkstra Archive: Home page The Manuscripts Like most of us, Dijkstra always believed it a scientist’s duty to maintain a lively correspondence with his scientific colleagues. To a greater extent than most of us, he put that conviction into practice. For over four decades, he mailed copies of his consecutively numbered technical notes, trip reports, insightful observations, and pungent commentaries, known collectively as “EWDs”, to several dozen recipients in academia and industry. Thanks to the ubiquity of the photocopier and the wide interest in Dijkstra’s writings, the informal circulation of many of the EWDs eventually reached into the thousands. Although most of Dijkstra’s publications began life as EWD manuscripts, the great majority of his manuscripts remain unpublished. The original manuscripts, along with diaries, correspondence, photographs, and other papers, are housed at The Center for American History of The University of Texas at Austin. Indexes 0. 1. Transcripts and translations Links between EWDs

64 Things Every Geek Should Know - laptoplogic.com The term ‘geek’, once used to label a circus freak, has morphed in meaning over the years. What was once an unusual profession transferred into a word indicating social awkwardness. As time has gone on, the word has yet again morphed to indicate a new type of individual: someone who is obsessive over one (or more) particular subjects, whether it be science, photography, electronics, computers, media, or any other field. A techie geek is usually one who knows a little about everything, and is thus the person family and friends turn to whenever they have a question. 1. USB – Universal Serial Bus GPU – Graphics Processing Unit CPU – Central Processing Unit SATA – Serial ATA HTML – Hyper-text Markup Language HTTP – Hypertext Transfer Protocol FTP – File Transfer Protocol P2P – Person to Person data sharing 2. If you rolled your eyes here, that is a good thing. 3. Here’s what one looks like: 4. 5. 6. 7. 8. 9. 10. 11. 12. 13. 14.