The 4 Stages Of Edtech Disruption 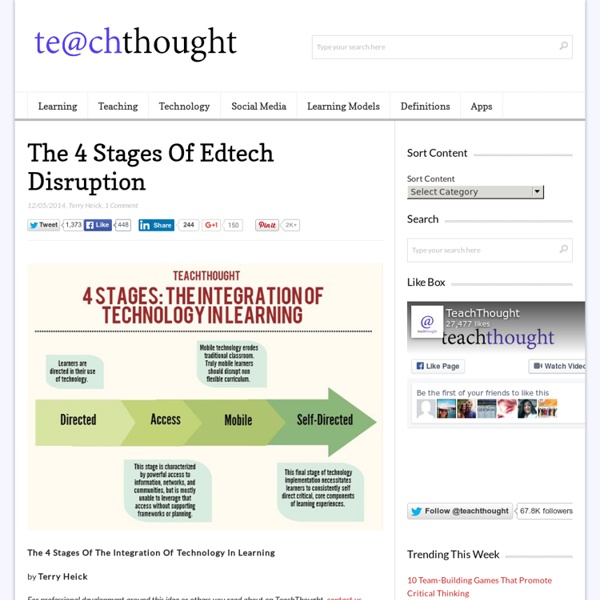 The 4 Stages Of The Integration Of Technology In Learning by Terry Heick For professional development around this idea or others you read about on TeachThought, contact us. Technology can be used in the learning process in a variety of ways. Some are supplementary, serving the original design of the classroom and usually automate some previously by-human task or process–grading multiple choice assessments, searching for a source of information, or sharing messages and other data across large groups. But fully integrated and embedded in the learning process, technology can be transformative–and disruptive. Scaffolding the learning of anything unfamiliar–somehow–is a way of supporting the learner and setting them up for long-term independent success. Should elementary school be stage 1, middle school stage 2, and so on? Should all learners begin a school year at stage 1 and move as far as they can towards stage 4? Can a planned learning experience be evaluated using this framework in mind?

The Evolution of Classroom Technology Infographic Educational Technology Infographics The Evolution of Classroom Technology Infographic shows how we moved from pencil and paper to iPads and online platforms. Via: www.onlineschools.com Howard Gardner: ‘Multiple intelligences’ are not ‘learning styles’ The fields of psychology and education were revolutionized 30 years ago when the now world-renowned psychologist Howard Gardner published his 1983 book Frames of Mind: The Theory of Multiple Intelligences,” which detailed a new model of human intelligence that went beyond the traditional view that there was a single kind that could be measured by standardized tests. (You can read his account of how he came up with the theory here.) Gardner’s theory initially listed seven intelligences which work together: linguistic, logical-mathematical, musical, bodily-kinesthetic, spatial, interpersonal and intrapersonal; he later added an eighth, naturalist intelligence and says there may be a few more.

David Hahn - Wikipedia While the incident was not widely publicized initially, it became better known following a 1998 Harper's article by journalist Ken Silverstein. Hahn was also the subject of Silverstein's 2004 book, The Radioactive Boy Scout.[2] Creation of the reactor[edit] Hahn posed as an adult scientist or high school teacher to gain the trust of many professionals in letters—and succeeded, despite misspellings and obvious errors. Hahn ultimately hoped to create a breeder reactor, using low-level isotopes to transform samples of thorium and uranium into fissionable isotopes.[5] His homemade reactor never came anywhere near reaching critical mass—but it ended up emitting dangerous levels of radiation, likely well over 1,000 times normal background radiation.

Crowd shaped: The future of online learning? The @chat2lrn crew are delighted to have a blog post this week from Kate Graham (@kategraham23) in which she explores Crowd Sourced Learning. In 2012, technology and collaboration collided in a big way and started to change the face of learning. Crowd sourced learning projects were the big story last year, a trend that seems set to continue. 4 Visual Guides To Bloom's Taxonomy Apps Yesterday, we looked at an overview of the old and revised versions of Bloom’s taxonomy . We talked a little bit about categorizing current classroom activities to see which of Bloom’s objectives you’re addressing (whether intentionally or unintentionally). Today, we’re looking at some apps and web tools that address the Bloom’s taxonomy objectives – helping bring Mr.

Computer Message Systems - Jacques F. Vallee Publisher: McGraw-Hill, New York 1984 Data Communications Book Series Hardcover, 163 pages, illustrated, indexed Part One: The Need for Message Systems 1: A Technology for Effective Communications - A technological and social leap - Communications patterns -The technology and its cost - Case Study 1: Institute of Nuclear Power Operations 2: The Message environment. The Organization, its management, its culture. - Characteristics of organizations - Group interaction and participation patterns - The Culture of the organization - A simple test - Case Study 2: NASA The Definition Of The Flipped Classroom The Definition Of The Flipped Classroom As one of the most popular trends in education in recent memory, you’ve undoubtedly heard of the flipped classroom. But what is it about a classroom that’s been flipped that makes it unique? A flipped classroom is one where students are introduced to content at home, and practice working through it at school. In this blended learning approach, face-to-face interaction is mixed with independent study via technology. Students watch pre-recorded videos at home, then come to school to do the homework armed with questions and at least some background knowledge.

Participatory Technology Assessment As part of its mission to advocate for greater public participation in science and technology policymaking, the Loka Institute continues to help catalyze and popularize innovative new forms of participatory technology assessment (or pTA). Loka played a central role in helping to organize World Wide Views on Global Warming in 2009, the first global citizen policy consultation in history. Since then, Loka's Founder and Senior Fellow, Richard Sclove, and Loka's Board Chair, Rick Worthington, have been leading Loka's efforts to partner with other organizations in the United States and internationally to create an institution in the U.S. that could coordinate and disseminate pTA activities. 15 Shareable Learning Design & Development Quotes Here is a list of are some of the best quotes about training, success and learning. What are your favorite sharable learning quotes? Share them in the comments below! "The most basic way to get someone's attention is this: Break a pattern.

'All of us can be harmed': Investigation reveals hundreds of Canadians have phoney degrees A Marketplace investigation of the world's largest diploma mill has discovered many Canadians could be putting their health and well-being in the hands of nurses, engineers, counsellors and other professionals with phoney credentials. Fake diplomas are a billion-dollar industry, according to experts, and Marketplace obtained business records of its biggest player, a Pakistan-based IT firm called Axact. The team spent months combing through thousands of degree transactions, cross referencing personal information with customers' social media profiles. Virtual Reality is the Future of Career Education Every so often, a new way emerges. A way for society to perform critical tasks in ways completely discontinuous from the trends and ways of doing things that came before. There was a time when schooling itself was an amazing innovation. Now, it is expected, and granted as a right. The new way needed is one that helps us use technology in a way that scales amazing teaching and learning experiences. Experiences that heighten learning and enrich lives, and are delivered in efficient and cost effective ways.

'1,000% unacceptable': Marketplace confronts college professor about his fake degree For more than a decade, Dubravko Zgrablic has pursued his "calling" by teaching thousands of students at several post-secondary institutions in Toronto. He says those schools include Centennial College, the University of Toronto, Ryerson University and Seneca College, where, according to his LinkedIn profile, he currently teaches computer applications and project management courses. Ask him where he earned his master's degree in computer science, however, and he has trouble remembering the school's name. "Forgetting those … things, I'm always messing up," he said. "Down in the states."