The Man Behind the Hidden World of Magic Leap. By most measures, Magic Leap founder Rony Abovitz is eccentric. 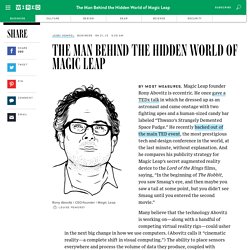 He once gave a TEDx talk in which he dressed up as an astronaut and came onstage with two fighting apes and a human-sized candy bar labeled “Thwaxo’s Strangely Demented Space Fudge.” He recently backed out of the main TED event, the most prestigious tech and design conference in the world, at the last minute, without explanation. And he compares his publicity strategy for Magic Leap’s secret augmented reality device to the Lord of the Rings films, saying, “In the beginning of The Hobbit, you saw Smaug’s eye, and then maybe you saw a tail at some point, but you didn’t see Smaug until you entered the second movie.” Many believe that the technology Abovitz is working on—along with a handful of competing virtual reality rigs—could usher in the next big change in how we use computers. 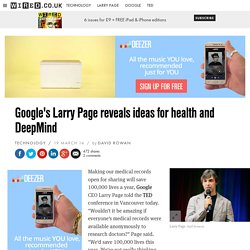 "Wouldn't it be amazing if everyone's medical records were available anonymously to research doctors? " Page said. "We'd save 100,000 lives this year. We're not really thinking about the tremendous good which can come from people sharing information with the right people in the right ways. " Page condemned the US government for abusing trust in accessing personal data unlawfully, but said he worried about "throwing away the baby with the bathwater" in moving against openness. Google’s New Company Calico To Try to Cheat Death. A joke about Silicon Valley is that entrepreneurs always seem to focus on the problems facing people of their own age. 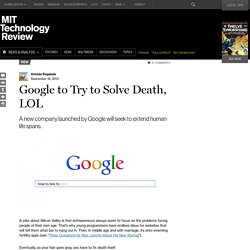 That’s why young programmers have endless ideas for websites that will tell them what bar to hang out in. Then, in middle age and with marriage, it’s onto inventing fertility apps (see “Three Questions for Max Levchin About His New Startup”). Eventually, as your hair goes gray, you have to fix death itself. Uk.businessinsider. What New Ideas Does Google Have Brewing At Motorola? I was texting last weekend while stopped at a red light on my bicycle, and as the light turned green, I carelessly put the phone in my pocket and pedaled off. 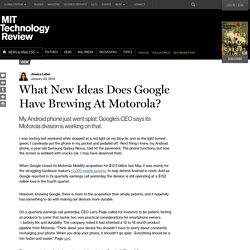 Next thing I knew, my Android phone, a year-old Samsung Galaxy Nexus, had hit the pavement. The phone functions, but now the screen is webbed with cracks (ok, I may have deserved that). When Google closed its Motorola Mobility acquisition for $12.5 billion last May, it was mainly for the struggling hardware maker’s 17,000 mobile patents, to help defend Android in court. And as Google reported in its quarterly earnings call yesterday, the division is still operating at a $152 million loss in the fourth quarter. The Secret History of the Hashtag, Slash, and Interrobang. Glyphs are the hidden heroes of the typography world. 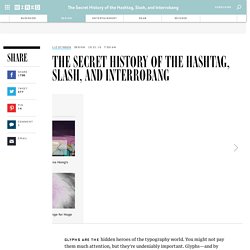 You might not pay them much attention, but they’re undeniably important. Glyphs—and by glyphs we’re referring specifically to those little typographic symbols that include punctuation—give intention and structure to a sentence; they help you interpret a piece of text. They tell you when to pause, when to question, when to feel enthused. “They are the rational part of sound,” says Adriana Caneva. Caneva is one half of London design studio Off-White. The book covers everything from the period to the slash to something called an interrobang. After Today, Google Officially Becomes Alphabet. Google has reorganized itself into multiple companies, separating its core Internet business from several of its most ambitious projects while continuing to run all of these operations under a new umbrella company called Alphabet. 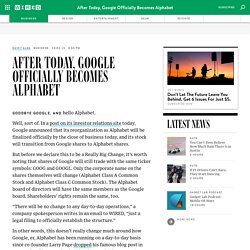 “What is Alphabet? Alphabet is mostly a collection of companies. The largest of which, of course, is Google,” Google co-founder Larry Page said in a blog post this afternoon. Sorry Search, YouTube Is More Important to Google Than Ever. Alphabet was established to help Google develop its ideas beyond search into areas as diverse as self-driving cars, medical technology, and high-speed internet connections. 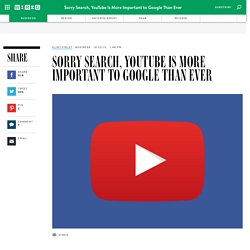 But it’s YouTube, still a part of Google prime, that the company is touting as one of its first big successes outside of search. During Alphabet’s first quarterly earnings call yesterday, Google CEO Sundar Pichai gushed about the video streaming service. YouTube now delivers hundreds of millions of hours of video per day, and much of that is happening on mobile devices. And it’s not just people watching cat videos.

“People turn to YouTube and they want to research, buy or fix a product,” he boasted. Although search is an important part of YouTube, it’s not fundamentally a search product in the way Image Search and even Google Maps are. Last quarter Kordestani revealed that the average YouTube mobile session is 40 minutes and claimed that YouTube now reaches more 18 to 49-year-olds than any single US cable network.