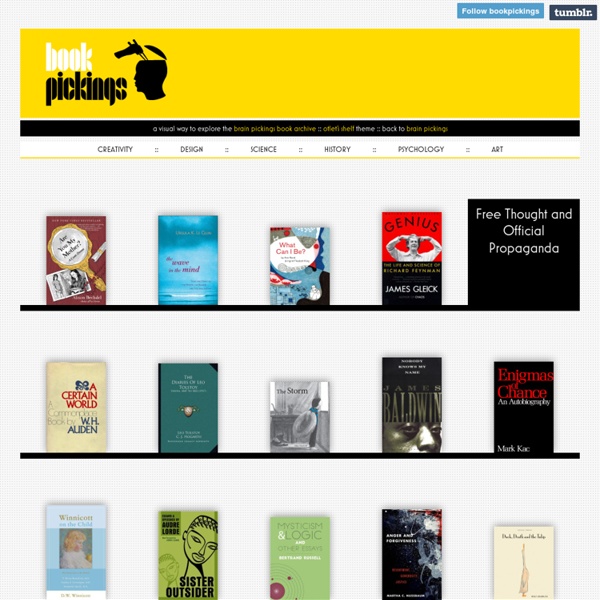 Why Is It So Hard for Women to Write About Sex? - Claire Dederer Because it's easier to titillate, shock, and lie than to get at the messy truth about female desire. Noma Bar/Dutch Uncle Maybe you remember the old joke: “Why do dogs lick their balls? Because they can.” Here’s a new one I just made up: “Why do women lie about sex? Because they can.” Steven Pinker Pinker, S., & Mehler, J. (1988). Connections and Symbols. Cambridge: The MIT Press.Abstract Does intelligence result from the manipulation of structured symbolic expressions? Or is it the result of the activation of large networks of densely interconnected simple units? Connections and Symbols provides the first systematic analysis of the explosive new field of connectionism that is challenging the basic tenets of cognitive science.

Dispatch Rider words go the distance - November 25 - (Source: cherrylisa) Why Women Aren't Funny From the John Springer Collection/Corbis. Be your gender what it may, you will certainly have heard the following from a female friend who is enumerating the charms of a new (male) squeeze: "He's really quite cute, and he's kind to my friends, and he knows all kinds of stuff, and he's so funny … " (If you yourself are a guy, and you know the man in question, you will often have said to yourself, "Funny? He wouldn't know a joke if it came served on a bed of lettuce with sauce béarnaise.") However, there is something that you absolutely never hear from a male friend who is hymning his latest (female) love interest: "She's a real honey, has a life of her own … [interlude for attributes that are none of your business] … and, man, does she ever make 'em laugh." Now, why is this? Why is it the case?

City Map of Fictional Streets and Landmarks This is a map that contains “over 900 film titles including cinema classics such as Lost Highway, On the Waterfront, Jurassic Park, Reservoir Dogs, Carlito’s Way, Nightmare on Elm Street, Valley of the Dolls and Chinatown.” (via We are Dorothy) I don’t know if it’s included on the map, but I’d really like to live at “P. Sherman Wallaby Way, Sydney”. Otherwise, I’ll settle for “The Polar Express” because I hear they have fantastic hot chocolate there, and I’d also be right next to “Forrest Gump” and “Animal Farm” which is great because I hear country air is good for you.

Feminism isn’t ruining your love life In 1970, an Australian university student scribbled A woman needs a man like a fish needs a bicycle on two bathroom walls—one at a bar, the other at her university. She was paraphrasing a line from one of her philosophy texts—“a man needs God like a fish needs a bicycle”—and having a bit of fun. “My inspiration arose from being involved in the renascent women’s movement at the time, and from being a bit of a smart-arse,” wrote Irina Dunn, who later became a member of the Australian Senate. Ever since then, Dunn’s moment of cheeky rebellion has been Exhibit A in countless attempts to explain why smart, independent women are so hopeless at relationships.

Most Anticipated: The Great Second-Half 2012 Book Preview 2012 has already been a rich year for books, with new novels from Toni Morrison, Richard Ford, and Hilary Mantel and essay collections from Marilynn Robinson and Jonathan Franzen, to name just a fraction of what we’ve featured, raved about, chewed on, and puzzled over so far. But the remainder of this year (and the hazy beginning of next year) is shaping up to be a jackpot of literary riches. In just a few short months, we’ll be seeing new titles from some of the most beloved and critically lauded authors working today, including Martin Amis, Zadie Smith, Michael Chabon, Junot Díaz, Alice Munro, Ian McEwan, George Saunders, and David Foster Wallace. Incredibly, there’s much more than that to get excited about, but, were we to delve into it further up here, we would risk this introduction consuming the many previews that are meant to follow. July:

Dangers of traveling while female When I was younger, I wanted to travel like Patrick Leigh Fermor, who famously spent 1934 walking from the Hook of Holland to Istanbul. I envisioned myself sporting leather satchels and lace-up boots, doffing Panama hats, spouting demotic Greek. I fantasized about riding horses through the Caucasus and letting falcons loose upon the Black Sea, about “living up in the mountains, dressed as a shepherd,” as Fermor had done. It was a fantasy cobbled together from all the books of all the travel writers I loved — the great writer-scholars of a certain generation, who saw the whole world as raw material: shifting, uncertain geography for them to shape and create anew in their words. Then I turned 15, and traveled alone for the first time to Paris, a city I had once lived in, and which I knew well.

Amazon Editors Pick the 20 Best Books of 2012 So Far Today Amazon editors revealed their picks for the best books of the year so far. The top ten books on the list were all published by the Big Six publishers–no Amazon Publishing, indie presses or self-published titles. The editors also picked their top ten books in all the popular categories: biographies & memoirs, business & investing, cookbooks, food & wine, crafts, hobbies & home, literature & fiction, mystery & thrillers, nonfiction, romance, science fiction & fantasy, comics & graphic novels, and teens, middle grade and picture books for kids. Here’s more from Amazon: “Customers can also enter the Best Books of the Year So Far Sweepstakes on the Amazon.com Books Facebook page through July 23 for a chance to win one of 10 Kindle Fire devices, each accompanied by a $100 Amazon.com Gift Card. There is no purchase necessary to enter. Must be a legal resident of the 50 United States or D.C., 18 or over.

Simone de Beauvoir: 10 key quotes Not born a woman … Simone de Beauvoir. Photograph: Sipa Press/Rex Features "Man is defined as a human being and woman as a female – whenever she behaves as a human being she is said to imitate the male." Books That Shaped America - National Book Festival The Library of Congress, the world’s largest repository of knowledge and information, began a multiyear “Celebration of the Book” with an exhibition on “Books That Shaped America.” The initial books in the exhibition are displayed below. “This list is a starting point,” said Librarian of Congress James H. Billington. 20 Best Websites To Download Free EBooks We understand that reading is the simplest way for human to derive and constructing meaning in order to gain a particular knowledge from a source. This tendency has been digitized when books evolve into digital media equivalent – E-Books. It would be nice if we’re able to download free e-book and take it with us. That’s why we’ve again crawled deep into the Internet to compile this list of 20 places to download free e-books for your use.

Have a precocious reader? Book series to keep even the fastest reader busy My fourth-grader rips through books in a single day. He is a precocious little reader, and I am constantly searching for series of books for him to read. I went into our local library this weekend and a lovely librarian came up with a great list of books for my little guys to tackle. And then she even walked me around to find them. I am pulling the description and age recommendation of each book from Amazon.com but you know your kids best. Here are the book she recommended for my 9-year-old boy: