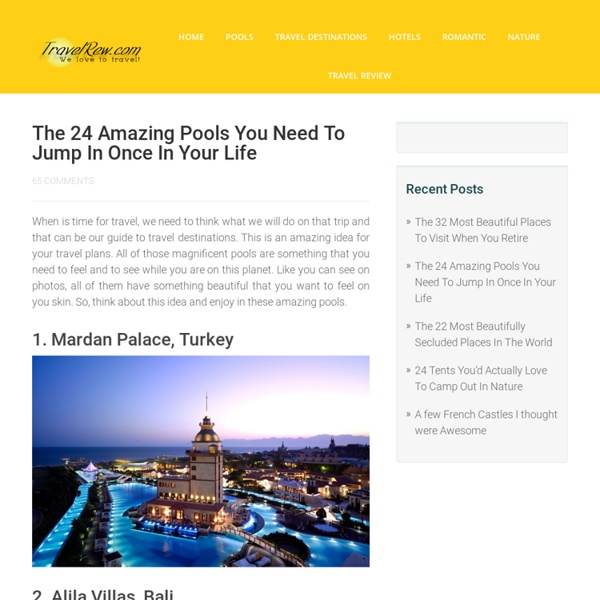 21 Tips to Help You Pack for a Trip We have compiled a great deal of packing tips after years of travelling and together with some members suggestions, we thought we should share them with other travellers setting out. 1. Security and Keeping Details Safe Scan your passport, passport photos and paper tickets (if not the e type) in. Store this (in an email for e.g.) in your web based email account. The 33 Most Beautiful Abandoned Places In The World Many people doesn’t know, and didn’t even heard about these famous abandoned places. Many of these places are really something amazing, but they are also really sad when you take a closer look at them. On the folowing list, you can see abandoned planes, abandoned ships, as well as the abandoned houses, and so many other things, that are really amazing and magnificent. So, check out these amazing abandoned places photos. 1.

Photographer's Girlfriend Leads Him Around the World My Modern Metropolis Photographer's Girlfriend Leads Him Around the World Photographer Murad Osmann creatively documents his travels around the world with his girlfriend leading the way in his ongoing series known as Follow Me To. Chronicling his adventures on Instagram, the Russian photographer composes each shot in a similar fashion. We see each landscape from the photographer's point of view with his extended hand holding onto his girlfriend's in front of him. 34 Lost Cities Forgotten by Time It’s hard to imagine how an entire city can get lost but that’s exactly what has happened to the lost cities on this list. There are actually many reasons why a city has to be abandoned. War, natural disasters, climate change and the loss of important trading partners to name a few. Whatever the cause, these lost cities were forgotten in time until they were rediscovered centuries later.

Jacob's Well, Wimberley, Texas Jacob’s Well is a significant karstic spring, the largest perennial spring in the Texas Hill Country. It flows from the most extensive underwater cave in Texas, opening in the bed of Cypress Creek, a few miles north of Wimberley, Texas.The twelve foot (four meter) diameter mouth of the cave serves as a popular swimming and water recreation spot for the local land owners whose properties adjoin Cypress Creek. From the opening in the creek bed, Jacob’s Well descends vertically for about thirty feet (ten meters), continuing from there at an angle as a series of chambers separated by narrow, often deeply silted and unstable necks, ultimately reaching a depth of at least one hundred and twenty feet (forty meters). From the dawn of recorded history until the modern era, the Trinity Aquifer-fed natural artesian spring gushed water from the mouth of the cave and as much as thirty feet (ten meters) into the air. At least eight divers have lost their lives while exploring Jacob’s Well.

Fashioning Change ® - Do Good Fashion Our Brands Fashioning Change is dedicated to helping shoppers make better purchase decisions. It is our mission to provide people with information, tools, and opportunity to create positive change via the... Read More › National Geographic Photo Contest 2011 - In Focus National Geographic is currently holding its annual photo contest, with the deadline for submissions coming up on November 30. For the past nine weeks, the society has been gathering and presenting galleries of submissions, encouraging readers to vote for them as well. National Geographic was kind enough to let me choose among its entries from 2011 for display here on In Focus. Gathered below are 45 images from the three categories of People, Places, and Nature, with captions written by the individual photographers. [45 photos] Use j/k keys or ←/→ to navigate Choose:

The Temple Cave of Batu Jun 13, 2013 Batu Caves is a limestone hill which has a series of caves and cave temples in the Gombak district, 13 kilometers (8 mi) north of Kuala Lumpur, Malaysia. It takes its name from the Sungai Batu or Batu River, which flows past the hill. The cave is one of the most popular Hindu shrines outside India and is the focal point of the Hindu festival of Thaipusam. Since 1892, the Thaipusam festival in the Tamil month of Thai (which falls in late January/early February) has been celebrated there. Rising almost 100 meters above the ground, the Batu Caves temple complex consists of three main caves and a few smaller ones. Some Bizzare and Odd things around us… Beauty of the nature lies in viewer’s eyes. A photograph is just a way to show or represent that beauty. Here is a bunch of some wonderful pictures which are not only the example of beautiful photography but are also a photograph of some miracles happening in the world. You can also call it the creativity and innovation of photographer’s mind.