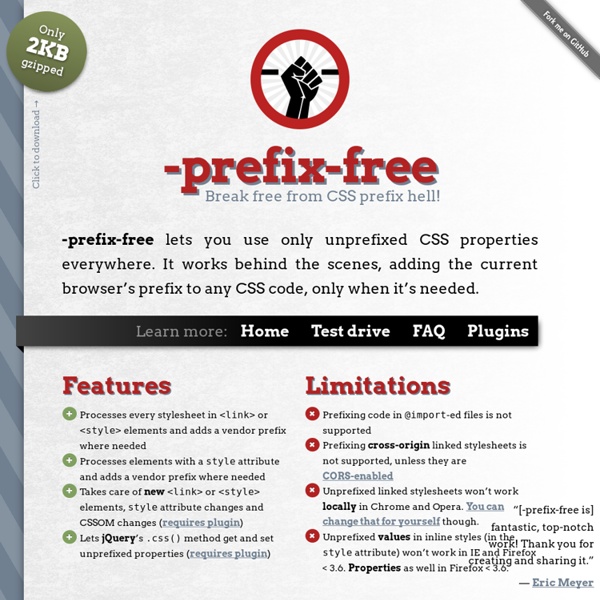 -prefix-free lets you use only unprefixed CSS properties everywhere. It works behind the scenes, adding the current browser’s prefix to any CSS code, only when it’s needed. The target browser support is IE9+, Opera 10+, Firefox 3.5+, Safari 4+ and Chrome on desktop and Mobile Safari, Android browser, Chrome and Opera Mobile on mobile. If it doesn’t work in any of those, it’s a bug so please report it. Just before you do, please make sure that it’s not because the browser doesn’t support a CSS3 feature at all, even with a prefix. In older browsers like IE8, nothing will break, just properties won’t get prefixed. Test the prefixing that -prefix-free would do for this browser, by writing some CSS below: Properties/values etc that already have a prefix won’t be altered. It’s not ideal, but it’s a solution, until a more intuitive way to deal with these cases is added in -prefix-free. Please note that in unsupported browsers like IE8, no such class will be added. Firefox (and IE?)

CSS Formatter and Beautifier Enter your messy, minified, or obfuscated CSS Style Sheets into the field above to have it cleaned up and made pretty. The editor above also contains helpful line numbers and syntax highlighting. There are many option to tailor the beautifier to your personal formatting tastes. Draggable Image Boxes Grid Today we want to create a template with a fullscreen grid of images and content areas. The idea is to have a draggable grid that shows boxes of thumbnails and menu like items. Once clicked, the thumbnail will expand to the full size image and the menu item box will expand to a fullscreen content area.

18 Social Media Icons You Need to Know Sure, you know what those Twitter, Facebook, reddit and Digg icons mean at the bottom of most blog posts these days, but what about all those other funny-looking ones? There's a pantload of them - so many that it can be overwhelming and confusing. Allow us to break down our 18 favorites for you (click each icon to be taken to their Web site): Icon Fonts are Awesome Because you can easily change the size Because you can easily change the color Because you can easily shadow their shape Because they can have transparent knockouts, which work in IE6 unlike alpha transparent pngs. Because you can do all the other stuff image based icons can do, like change opacity or rotate or whatever. You'll be able to do things like add strokes to them with text-stroke or add gradients/textures with background-clip: text; once browser support is a bit deeper. The icon font used on this page is Fico by Lennart Schoors then ran through IcoMoon for custom mappings.

CSS Template Layout Module Abstract A grid with four slots defined by ‘display: "aaaaaaa" "bccccdd"’. CSS is a simple, declarative language for creating style sheets that specify the rendering of HTML and other structured documents. This module contains CSS features to describe layouts at a high level, meant for tasks such as the positioning and alignment of “widgets” in a graphical user interface or the layout grid for a page or a window. A layout grid or “template” defines one or more “slots” that an element's content can flow into. This allows elements to have complex shapes and it allows the visual order to be different from the order of the elements in the source document. SwatchBooker Features Reads color swatches from: Adobe aco, acb, act, ase, acf, bcf, clrAutoCAD acb (unencrypted only!)ColorSchemer csCorel cpl, xml (X5)GIMP gplICC named colors profilesOpenOffice.org socQuarkXPress qcl (+cui)RAL bcsRIFF palScribus xmlVivaDesigner xmlXara jcw Reads gradient swatches from:

Tools and templates CSS or cascading style sheet is basically a style sheet language that is used to describe the presentation semantics or the looks and formatting of a document. This document is written in a mark-up language. One of its basic uses is to style the web pages that are either written in HTML or XHTML but this language can also be applied to any other kind of document. CSS also does a major job that is it separates the content of the document from the presentation of the document and in addition it also includes features like layouts, colors and fonts. This separation that is done by CSS improves the accessibility of the content and also provides more flexibility and control in the specification of presentation. CSS also enables the mark-up languages to be printed in various forms.

Photographer's Girlfriend Leads Him Around the World My Modern Metropolis Photographer's Girlfriend Leads Him Around the World Photographer Murad Osmann creatively documents his travels around the world with his girlfriend leading the way in his ongoing series known as Follow Me To. Chronicling his adventures on Instagram, the Russian photographer composes each shot in a similar fashion. 5 Techniques to Acquaint You With CSS 3 CSS is a well-known, widely used language to style websites. With version three in the works, many time-saving features will be implemented. Although only the most modern browsers currently support these effects, it's still fun to see what's around the corner! In this tutorial I'll show you five techniques. 1: The Basic Markup Before we start with this tutorial, let's create the basic markup that we will be working with throughout the tutorial.

Autoprefixer: A Postprocessor for Dealing with Vendor Prefixes in the Best Possible Way By Andrey Sitnik On The following is a guest post by Andrey Sitnik, the creator of the Autoprefixer tool, a "postprocessor" for handling vendor prefixes in CSS. Why use this instead of your preprocessor or another tool? Many reasons. Andrey will explain. Autoprefixer parses CSS files and adds vendor prefixes to CSS rules using the Can I Use database to determine which prefixes are needed.

Documentation Spritely is a simple plugin with only two key methods, sprite() and pan() both of which simply animate the background-image css property of an element. The difference between the two is that a 'sprite' image contains two or more 'frames' of animation, whereas a 'pan' image contains a continuous image which pans left or right and then repeats. Typically, in either case, you would use a png file (with or without transparency) for this. The 101 Most Useful Websites on the Internet Here are the most useful websites on the Internet that will make you smarter, increase productivity and help you learn new skills. These incredibly useful websites solve at least one problem really well. And they all have cool URLs that are easy to memorize thus saving you a trip to Google. Also see: The Best Android Apps Also see: The Best Mac Apps and Utilities