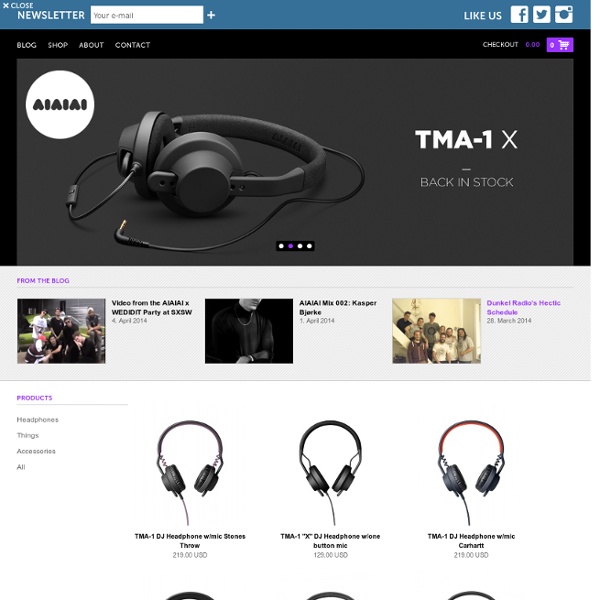 DIY Pinhole Camera / Solargraphy Kit Make-It-Yourself Paper Pinhole and Solargraphy kit. Assemble in 1-2 hours ? no knife or scissors needed. Use 35mm film (not included) preferably ISO200. Technical Specs: Film type: Aperture 1.16mm. Feautres: Assemble in 1 hour without knife or scissors. PA-Design : Accueil ‘Seasons’ flexible dinnerware by Nao Tamura (US) 'Seasons' flexible dinnerware by Nao Tamura The one thing that’s clear in all the debate about sustainability and design is that, beyond the considered use of materials and thoughtfulness about energy consumption in production, a product must invite the user to form a long-term relationship with it. In short, it should be kept forever. ‘Seasons’, a flexible, durable serving dish, designed by New York-based Nao Tamura and shown at this year’s Milan SaloneSatellite, has a very good chance of being one of these life-long companions. Made of silicone, 'Seasons' can be rolled up for storage The inspiration for ‘Seasons’ is drawn from, among other sources, cherry leaves, which are used in Japan during the spring to wrap sweets. 'Seasons' by Nao Tamura to Nao Tamura’s website

Best of Yanko Design 2008 Best of Yanko Design 2008 With just a week left in the year we’ve wrapped up our best of the year designs in one big post for your reading pleasure. 2008 has been an eventful and inspiring year, and it’s hard to put all the top news in one place; still, if there’s one Yanko Design article you want to bookmark this year, this should be it. Happy Holidays and Happy New Year! 50) “DesCom” by Sung-kyu Nam. 49) iStick by Alexei Mikhailov. 48) Collapsible Surfboard by Nicholas Notara. 47) “Ceramix For Mix” by Florian Dussopt. 46) Metamophing Computer Interface by Jonathan Lucas. 45) E-Paper Slap Bracelets by Chocolate Agency. 44) The Shooter Fire Extinguisher by Junyi Heo. 43 ) Forest Fire “Clear Cut” Robot by Daniel Shankland II. 42) Pocket Light by Hyun Jin Yoon. 41) SMS & Email Pen by Reuben Png. 40) Making Your Own Clock by Bomi Kim. 39) The Edge Phone by Chris Owens. 38) BMW Gina. 37) Febot Recharges Batteries by Ji-yun Kim. 36) High Tech Napkins by Avery Holleman. 25) PSP 2 Tai Chiem.

Amazon reveals its red hot $200 Kindle Fire tablet, lands November Here it is, the Kindle Fire, Amazon's 7-inch tablet. Amazon's not trying to slay the iPad with the Kindle Fire, it's a tablet for the rest of us. We're excited because it's small, minimal in design, and affordable at $200 — just the way a Kindle tablet should be. Why is the Amazon's tablet called the Kindle Fire? Simply because "from kindle, the fire is born." How cheesy. The Jelly Inside The Donut TechCrunch hit it right on the mark. The tablet does sport a fast dual-core processor, 8GB of internal storage, speakers, micro USB port, audio jack and its screen has a 1024 x 600 resolution and is made out of Gorilla glass with IPS technology so viewing angles are gorgeous. There are no cameras on the Kindle Fire, but that's alright. The Kindle Fire will come in one model: Wi-Fi. All your content is backed up into the Amazon Cloud. Made For Consuming Media, Not Creating Media Doing so lets the media veterans handle the content. There's also a Kindle-customized Web browser — Amazon Silk.