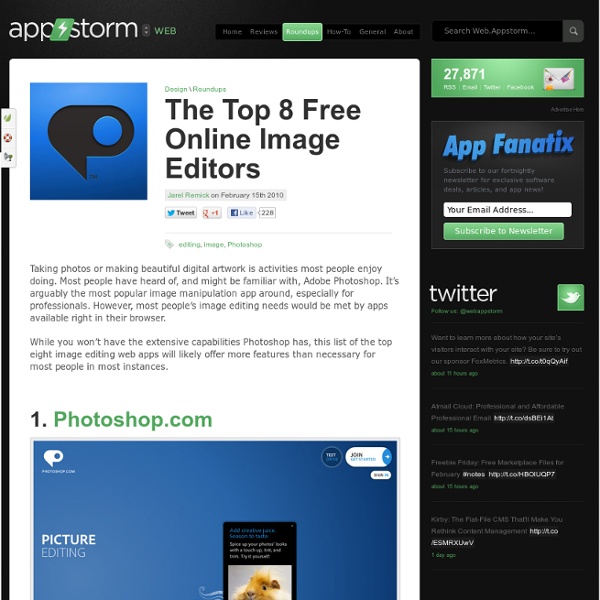 Taking photos or making beautiful digital artwork is activities most people enjoy doing. Most people have heard of, and might be familiar with, Adobe Photoshop. It’s arguably the most popular image manipulation app around, especially for professionals. However, most people’s image editing needs would be met by apps available right in their browser. While you won’t have the extensive capabilities Photoshop has, this list of the top eight image editing web apps will likely offer more features than necessary for most people in most instances. 1. Photoshop.com Photoshop.com is the lightweight version of the behemoth desktop app, Photoshop. Requirements: Flash 10+Developer: Adobe 2. Splashup Splashup is quite similar to Photoshop in respect to its interface, while offering a strong selection of tools and a few more than basic image editing capabilities. Requirements: FlashDeveloper: Faux Labs 3. Aviary Aviary offers everything from image editing to vector and audio editing. 4. picnik Picnik flauntR

8 Pinterest Alternatives You May Not Know About Pinterest has garnered a reputation (whether incidentally or intentionally) as a website geared mostly towards females who need ideas for weddings, home décor, and recreation. Maybe you like the idea of Pinterest but not its subject matter. Maybe Pinterest just isn’t for you. Is there hope for you? Yes, there is.

Pencils, Pixels and the pursuit of Awesomeness Mike Mattesi breaks down motion and form into a formula that concentrates on anatomical subtleties in Force Animal Drawing. Mike distills the essence of motion and form, and how they work together, looking at the big picture of gesture and action, rather than morphological details. Here, Mike specifically examines the motion and form of Digitrades. A digitigrade animal is one that stands or walks on its digits, or toes, by definition, although I see it more as the ball of the foot or pad of the hand. popsci Its solar panels are dusty and its instruments are weakening, but the intrepid Mars rover Opportunity is still undaunted. Today marks the rover's eighth anniversary on the Red Planet, truly a feat for a mission that was designed to last a single season. As the rover embarks on its ninth year of work, it has some brand-new tasks that will give Mars scientists plenty to do long after it has beeped its last transmission home. Opportunity is nestled for the winter at a rocky outcropping called Greeley Haven, perched at a southerly angle to provide its solar panels with maximum light.

Web Design - The Old Way and The New Way My approach to web design (like the Pro Web Design Alliance I’ve just founded) is based on the principle that the vast majority of websites don’t achieve a fraction of their potential success Success is governed by just two main factors: Traffic and Conversion: How many of the right people can you attract to your site? … and …How many of those people can you persuade to take the action you want them to take? The Bad Old Way 30 Best Room Pictures of the Week – June 02st to June 08th 1. I really love this pool 2. Kohler Waterfall Shower

100 Websites You Should Know and Use In the spring of 2007, Julius Wiedemann, editor in charge at Taschen GmbH, gave a legendary TED University talk: an ultra-fast-moving ride through the “100 websites you should know and use.” Six years later, it remains one of the most viewed TED blog posts ever. Time for an update? We think so. Below, the 2013 edition of the 100 websites to put on your radar and in your browser.

Packaging Design We all know how good it is to have correct clipart in a times of tight deadlines and creative block which, sooner or later, happens to all of us. And It's much more better to have them for free. That's what we doing here - sharing tons of design tools for free. Most of them even free for commercial purposes: web-design and prints, brochures and b-cards, posters and flyers, creative illustrations t-shirt design, book/CD/DVD covers or logotypes. But please don't sell Dezignus.com freebies as is. Have Fun! Caricature Map of Europe 1914 The Clanker Powers: Germany is a massive military machine with weapons aimed outwards to all surrounding countries. It points threateningly at Britain, not so much as a sign of direct aggression, but more as an indicator that it was now Germany’s turn to start a grand global Empire to challenge the world’s current one. Austria Hungary is an aggressive armoured giant, teetering on shoddy foundations. It is also the primary aggressor in a land grab against Serbia, with two bayonets piercing the border.

Download 422 Free Art Books from The Metropolitan Museum of Art You could pay $118 on Amazon for the Metropolitan Museum of Art’s catalog The Art of Illumination: The Limbourg Brothers and the Belles Heures of Jean de France, Duc de Berry. Or you could pay $0 to download it at MetPublications, the site offering “five decades of Met Museum publications on art history available to read, download, and/or search for free.” If that strikes you as an obvious choice, prepare to spend some serious time browsing MetPublications’ collection of free art books and catalogs. You may remember that we featured the site a few years ago, back when it offered 397 whole books free for the reading, including American Impressionism and Realism: The Painting of Modern Life, 1885–1915; Leonardo da Vinci: Anatomical Drawings from the Royal Library; and Wisdom Embodied: Chinese Buddhist and Daoist Sculpture in The Metropolitan Museum of Art. Related Content: Download Over 250 Free Art Books From the Getty Museum

3D Paintings on Panes of Glass Using multiple layers of clear glass, Canada based David Spriggs and Chinese born Xia Xiaowan, transform flat artwork into 3D sculptures. Viewers are treated to different shifting perspectives of the works based on where they stand in the art space. Spriggs work revolves around powerful explosive imagery, often resembling storms, cosmic blasts or firework like explosions. Xiawan’s “spatial paintings,” which often feature distorted figures, are drawn individually using colored pencil on tinted glass. Only when these pieces are combined on their floor racks do the images create the whole hologram like effect. 100 Very Cool Facts About The Human Body The Brain The human brain is the most complex and least understood part of the human anatomy. There may be a lot we don’t know, but here are a few interesting facts that we’ve got covered.

Smithsonian Digitizes & Lets You Download 40,000 Works of Asian and American Art Art lovers who visit my hometown of Washington, DC have an almost embarrassing wealth of opportunities to view art collections classical, Baroque, Renaissance, modern, postmodern, and otherwise through the Smithsonian’s network of museums. From the East and West Wings of the National Gallery, to the Hirshhorn, with its wondrous sculpture garden, to the American Art Museum and Renwick Gallery—I’ll admit, it can be a little overwhelming, and far too much to take in during a weekend jaunt, especially if you’ve got restless family in tow. (One can’t, after all, miss the Natural History or Air and Space Museums… or, you know… those monuments.) In all the bustle of a DC vacation, however, one collection tends to get overlooked, and it is one of my personal favorites—the Freer and Sackler Galleries, which house the Smithsonian’s unique collection of Asian art, including the James McNeill Whistler-decorated Peacock Room.

The Art of Color - What Colors Go Well Together Picking which colors go well together is much easier than most people think. The key to choosing the right colors for the right occasions is all about the color wheel. If you imagine the color wheel when you are picking out the colors of your outfit you will have no problem making sure your outfit matches and the colors all go well together. With suits and most men’s clothes sticking to solid color ties and solid color suits makes it that much easier to play around with color matching.