Treemaps for space-constrained visualization of hierarchies 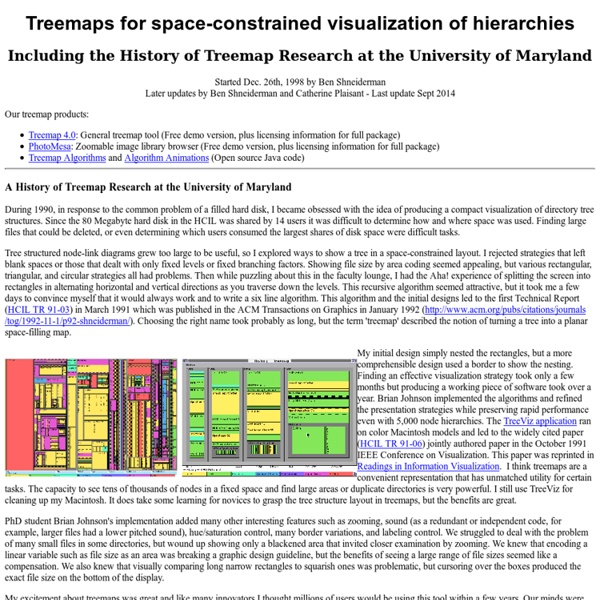 Started Dec. 26th, 1998 by Later updates by Ben Shneiderman and Catherine Plaisant - Last update Sept 2014 Our treemap products: Treemap 4.0: General treemap tool (Free demo version, plus licensing information for full package) PhotoMesa: Zoomable image library browser (Free demo version, plus licensing information for full package) Treemap Algorithms and Algorithm Animations (Open source Java code) A History of Treemap Research at the During 1990, in response to the common problem of a filled hard disk, I became obsessed with the idea of producing a compact visualization of directory tree structures. Tree structured node-link diagrams grew too large to be useful, so I explored ways to show a tree in a space-constrained layout. My initial design simply nested the rectangles, but a more comprehensible design used a border to show the nesting. My excitement about treemaps was great and like many innovators I thought millions of users would be using this tool within a few years. Related:  Data Visualising

Concept map An Electricity Concept Map, an example of a concept map A concept map or conceptual diagram is a diagram that depicts suggested relationships between concepts.[1] It is a graphical tool that designers, engineers, technical writers, and others use to organize and structure knowledge. A concept map typically represents ideas and information as boxes or circles, which it connects with labeled arrows in a downward-branching hierarchical structure. Overview[edit] A concept map is a way of representing relationships between ideas, images, or words in the same way that a sentence diagram represents the grammar of a sentence, a road map represents the locations of highways and towns, and a circuit diagram represents the workings of an electrical appliance. Concept maps were developed to enhance meaningful learning in the sciences. Differences from other visualizations[edit] History[edit] Various attempts have been made to conceptualize the process of creating concept maps. Use[edit] See also[edit]

How It Works The Visual Thesaurus is an interactive dictionary and thesaurus which creates word maps that blossom with meanings and branch to related words. Its innovative display encourages exploration and learning. You'll understand language in a powerful new way. Say you have a meaning in mind, like "happy." The VT helps you find related words, from "cheerful" to "euphoric." With the Visual Thesaurus, you can: Find the right word. Click on the images below to watch the videos. Here are 6 basic steps on how to use the Visual Thesaurus.

Vintage data visualization: 35 examples from before the Digital Era This is a guest post by Tiago Veloso, the founder of Visual Loop, a collaborative digital environment for everything related to information design and data visualization. He lives in Brazil, and you can connect with him online on Twitter and LinkedIn. If you follow us regularly on Visual Loop, you’ve probably noticed we like to featured not only modern interactive visualizations and infographics, but also examples from the past, from the time when there were no computer softwares to help analyzing and designing and no Internet to access and share data. Graphics, charts, diagrams and visual data representations have been published on books, newspapers and magazines since they exist, not to mention old maps and scientific illustrations, and despite the lack of tools such as the ones we have at our disposal nowadays, they are as inspiring and important as the best contemporary visualizations. A Map of Physics (1939) (A 1939 Map of Physics) (Via Strange Maps) (image:John Snow,1854 ) (image:P.

Tools on Datavisualization.ch A Carefully Selected List of Recommended Tools 07 May 2012 Tools Flash, JavaScript, Processing, R When I meet with people and talk about our work, I get asked a lot what technology we use to create interactive and dynamic data visualizations. To help you get started, we have put together a selection of the tools we use the most and that we enjoy working with. Read more Pathline: Connecting Designers With Scientists 18 Apr 2012 Tools We recently attended an interdisciplinary visualization workshop that was all about creating a dialogue between scientists, technologists and designers. New Maps for the Web by Stamen 22 Mar 2012 Tools JavaScript, Mapping I just left the Stamen studio where I had a brief chat with founder and CEO Eric Rodenbeck. The Visualizing Player 19 Jul 2011 Showcases, Tools Visualizing.org launched their brand new Visualizing Player, a terrific tool for embedding interactive and static data visualizations. Working with Data in Protovis 17 Feb 2011 Tools JavaScript, Tutorial

Data Visualization: Top 20 Amazing Tools | DATA SCIENCE REPORT - TODAY! It’s often said that data is the new world currency, and the web is the exchange bureau through which it’s traded. As consumers, we’re positively swimming in data; it’s everywhere from food labels to World Health Organisation reports. As a result, for the designer it’s becoming increasingly difficult to present data in a way that stands out from the mass of competing data streams. MR5RZMKG9XBF One of the best ways to get your message across is to use a visualisation to quickly draw attention to the key messages, and by presenting data visually it’s also possible to uncover surprising patterns and observations that wouldn’t be apparent from looking at stats alone. As author, data journalist and information designer David McCandless said in his TED talk: “By visualising information, we turn it into a landscape that you can explore with your eyes, a sort of information map. There are many different ways of telling a story, but everything starts with an idea. 01. iCharts 02.

20 free data visualisation tools | Infographic In this article, I want to focus on tips and tools that are free and easily accessible. There are loads of great paid tools out there, and I use many of them. But it is hard to expect someone just getting into this field to pay for expensive software without actually knowing what they are getting into. This article looks to expand the list to even more tools and resources you can use to help you get started creating beautiful data visualisations for the web and print. From data journalism, where you are scrubbing and combining datasets, to ornately designed infographic style posters, you need to understand the tools and your audience to succeed. Cleaning up Anyone who works with data sets will tell you that a big portion of your time is spent cleaning it up into a usable format! Over the years a more and more tools have been created to help ease the pain. Data Wrangler Open Refine Open Refine is the re-branding of Google Refine. Tabula NVD3 is a library meant for reuse. D3 Maps Tools Chart.js