What is Internet of Things (IoT)? - Definition from WhatIs.com 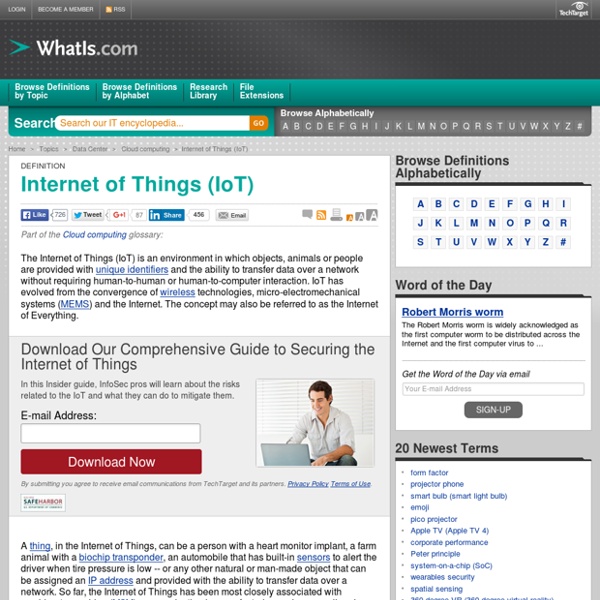 The Internet of Things (IoT) is an environment in which objects, animals or people are provided with unique identifiers and the ability to transfer data over a network without requiring human-to-human or human-to-computer interaction. IoT has evolved from the convergence of wireless technologies, micro-electromechanical systems (MEMS) and the Internet. The concept may also be referred to as the Internet of Everything. In this Insider guide, InfoSec pros will learn about the risks related to the IoT and what they can do to mitigate them. A thing, in the Internet of Things, can be a person with a heart monitor implant, a farm animal with a biochip transponder, an automobile that has built-in sensors to alert the driver when tire pressure is low -- or any other natural or man-made object that can be assigned an IP address and provided with the ability to transfer data over a network. IPv6’s huge increase in address space is an important factor in the development of the Internet of Things.

Internet of Things: what is it? Currently we can discern two main blocks of thought on IoT. The first is a reactive framework of ideas and thought that sees IoT as a layer of digital connectivity on top of existing infrastructure and things. This position sees IoT as a manageable set of convergent developments on infrastructure, services, applications and governance tools. It is assumed that, as in the transition from mainframe to Internet some business will fail and new ones will emerge, this will happen within the current governance, currency end business models. The second is a proactive framework of ideas and thought that sees IoT as a severely disruptive convergence that is unmanageable with current tools, as it will change the notion of what data and what noise is from the supply chain on to 'apps'. The Internet of Things; imagine a world where everything can be both analogue and digitally approached - reformulates our relationship with objects – things- as well as the objects themselves.

How the "Internet of Things" May Change the World This week, the Oxford English Dictionary added the phrase "Internet of things" to its hallowed pages, along with such neologisms as Bitcoin (a virtual currency), selfie (a self-portrait photo), twerk (a new dance move), and fauxhawk (a mohawk hairstyle achieved with gel and a comb). But what exactly is the Internet of things, and how might the emerging technology change our lives? The Internet of things is a concept that aims to extend the benefits of the regular Internet—constant connectivity, remote control ability, data sharing, and so on—to goods in the physical world. Foodstuffs, electronics, appliances, collectibles: All would be tied to local and global networks through embedded sensors that are "always on." Sometimes called the "Internet of everything," the term Internet of things was coined in 1999 by Kevin Ashton, a British technology pioneer who helped develop the concept. In order for objects to interface with the existing Internet, they must have some means to connect.

Join the Gatesense project | Gatesense During 29 and 30 November the first Gatesense Hackaton took place at Copenhagen Business School (CBS) facilities. We welcomed 30+ eager hackers and entrepreneurs from all over the world, including Germany, Denmark, Poland, China, USA and Holland and representing all profiles from hard core software developers to Elon Musk-like visionary entreprenours. Four Hackaton teams worked on: Generic Middleware of the Gatesense platformGatesense toolbox – Open Source plug-insDevelopment of a traffic app Building a Gatesense community worldwide and Gatesense business models After two days of intense sessions, the groups presented their result. The winning team won tickets to the week-long London Hackaton at IOT week in June 2014. As one of our participants noticed, this Hackaton was special because of the competing teams actually developing a co-opetition, a phenomena when cooperation and competition goes hand in hand to reach the desire outcome:

Internet of things: Connect your TV, home, even your body, to the internet. But beware hackers | Technology You may have noticed that there’s a lot of talk about the “internet of things” – things that aren’t computers but with connectivity, such as appliances and sensors. Think of an internet-connected lightbulb, thermostat, door lock, washing machine or oven you can control from inside or outside your house. Think of a bridge that can communicate when its concrete structure is starting to show signs of ageing in places that can’t be reached by normal inspection. Think of a car that communicates with other cars about traffic and road conditions. It’s a thrilling concept if you believe in the power of the internet to transform our lives, and connectivity and intelligent (or at least constantly monitoring) systems to improve our wellbeing. That’s the sort of promise that the internet of things holds, which is why lots of companies are putting serious money into it. However, while I like the possibilities, I worry just a bit about the implementation.

Internet of Things - Architecture — IOT-A: Internet of Things Architecture The Architectural Reference Model (ARM), presented in this book by the members of the IoT-A project team makes it possible to connect vertically closed systems, architectures and application areas so as to create open interoperable systems and integrated environments and platforms. It constitutes a foundation from which software companies can capitalize on the benefits of developing consumer-oriented platforms including hardware, software and services. The material is structured in two parts. Part A introduces the general concepts developed for and applied in the ARM. It is aimed at end users who want to use IoT technologies, managers interested in understanding the opportunities generated by these novel technologies, and system architects who are interested in an overview of the underlying basic models. It also includes several case studies to illustrate how the ARM has been used in real-life scenarios.