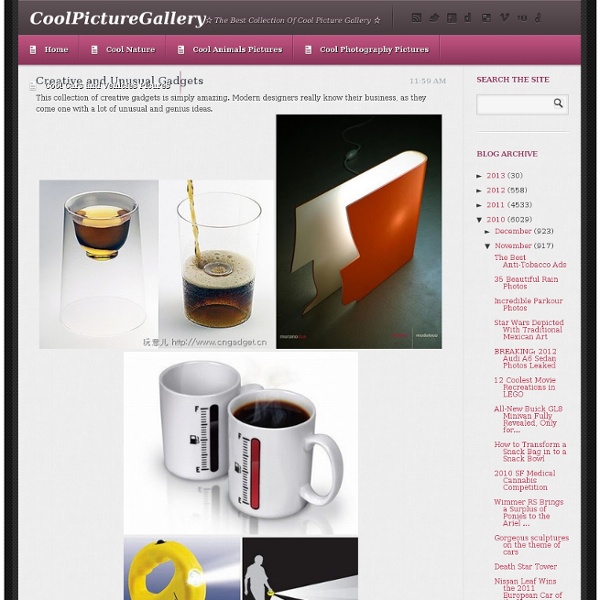 20+ Awesome T-Shirt Websites...The Best, Coolest, and Funniest T-Shirt Sites Online ~ ButterBlog Ever since cafepress came onto the internet, people have been spending a lot of time creating their own shirts. More than a decade later there are hundreds of blogs covering new emerging t-shirt designers, stores with hundreds of t-shirt designs, message boards, and even t-shirt design rating websites. There are even dozens of spin offs or blogs dedicated to each of the sites too. What does this mean for all of us? Some truly "epic" t-shirt designs. Below is a list of some of the greatest t-shirt websites out there. Other t-shirt websites (leave a website in the comments to add them here);

Everyday Objects Stash Money, Secrets, Drugs, IDs Yiting Cheng just finished up a master's degree in design, but she could already teach James Bond a thing or two about stashing valuables. For her thesis project, Cheng designed a series of eight objects that ingeniously store secrets--from passwords to money to drugs to IDs. And you can see all of them in this nicely shot video (our favorite is the secrete drawer, hidden in the edge of a table, which is only accessible when attach a magnetic pull): According to Cheng: This project is about concealing valuables, secrets, bad habits and personal information in our workplaces. Here, hidden spaces/messages were created within 8 general objects such as wood boards, lamps and disposable coffee cups. In other words, she hides things in plain sight, by hiding them inside objects so familiar that you'd never question their integrity.

Six in the Nest If you haven't heard of Diamond Candles, you want to. Diamond Candles are so much fun! These candles are at the top of my holiday want list! So, what is a Diamond Candle? It's an amazing smelling, large, soy candle that has a surprise in it. Each Diamond Candle has a ring inside. Diamond Candles was founded in January of 2011. See that shiny gold thing in the candle? I was sooo excited to find out what my ring looked like... The candle smelled great, even before I lit it...but once I did the scent wafted through my home, Lavender Lemon smells great! As you can see, the wick was a little off center.. and it happened to be off center more on the side that the ring wasn't. Now, these candles take a LONG time to burn. So, I waited..... and waited....... and waited some more. There it is! In that foil was a small plastic bag... and, as you can see, in that bag is my ring!! Whooo hoooo! This part was the best... sooo much fun! My ring has what I believe to be "Thailand" stamped in it:

Company Makes Custom Stuffed Toys Out of Children's Drawings Child’s Own Studio does something pretty neat: If you supply the studio with a drawing a child made, the studio will produce a stuffed toy using the child’s drawing as the blueprint. Are you an overprotective parent who will stop at nothing to make sure your child is both safe from possibly iffy design choices, but also one who makes sure their child gets exactly what they want at all times always? Child’s Own Studio actually prefers you, stating that the more directions provided, the better. On the site’s official FAQ, it is noted that there isn’t a set price, and the studio will provide a quote once the child’s drawing is received, though standard U.S. and Canadian shipping will cost $15. (Child’s Own Studio via Hacker News) Relevant to your interests

How-To Geek SciCombinator Disadvantaged social environments are associated with adverse health outcomes. This has been attributed, in part, to chronic stress. Telomere length (TL) has been used as a biomarker of chronic stress:… We provide evidence that citrate anions bridge between mineral platelets in bone and hypothesize that their presence acts to maintain separate platelets with disordered regions between them rather than gradual… Sex-specific elaborations are common in animals and have attracted the attention of many biologists, including Darwin [1]. Rapid advances in DNA synthesis techniques have made it possible to engineer viruses, biochemical pathways and assemble bacterial genomes. The small and active Saturnian moon Enceladus is one of the primary targets of the Cassini mission. Light exposure can influence sleep and circadian timing, both of which have been shown to influence weight regulation. Governments worldwide recommend daily consumption of fruit and vegetables.