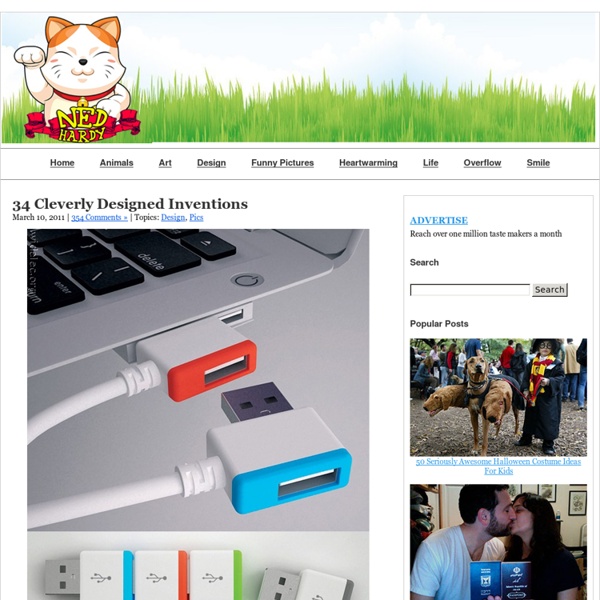 Japón Museo presenta un globo gigante hecha de 10.000 Live-Actualización de los paneles OLED Geo-Cosmos If you want to see what Earth looks like from space, become an astronaut (or, barring that, a space tourist). For the next best view, pay a visit to Tokyo’s National Museum of Emerging Science and Innovation where a massive, nearly 20-foot spherical OLED orb--the world’s first large scale spherical OLED --offers a satellite’s-eye view of the planet in super high resolution. “Geo-Cosmos” is made up of 10,362 OLED panels that display continuously-updating satellite footage of our tiny blue marble, representing what our planet looks like from space in something close to realtime. It replaces an earlier model covered in LED panels, offering museum-goers a full 10 million pixels, a resolution 10 times greater than its predecessor. And like any good museum exhibit, Geo-Cosmos is interactive. [ Tokyo Tek ]

Transparent Bubble Tents Posted on November 24, 2010 by saya These Transparent Bubble Tents encourage users to have a closer contact with the nature. Totally transparent, the new tent not only provides beautiful sceneries but also offers smart beds, cabinets, shelves and even electric lighting for use. To sum up, it’s really the best tent designed for those who love waiting for the stars. Designer: Pierre Stephane Dumas Selling Price: $11914 Sky Garden House I think one of the reasons that many are skeptical about environmental design is because they think its terribly complex and costly. It does take a bit more effort on the front end, but it's definitely not rocket science. This architecture by Guz Architects is a wonderfully developed minimalistic design with a curvilinear flare that really brings out the organic coverings. I'm most impressed with how design facilitates the needs of the plants and shrubs located throughout the house. See more at Guz Architects

Awesome Minimalist Disney Posters FTW Something about minimalist art just looks great on movie posters. Combine that with Disney movies and you get a whole new edge. You might think most of these posters are for some dark, avant-garde indie film, not a cute animated kid’s flick. Also, be sure to check out: Minimalist Posters of Cult Classics and Awesome Minimalist Book Covers FTW (image) Liverpool graphic designer Rowan Stocks-Moore designed these. The above (and others) are all available in poster form on Rowan Stocks-Moore’s Etsy account He has recently had a lot of requests for his stuff so expect to wait about 14 working days for a print, longer for United States customers. Awesome Minimalist Disney Posters FTW El misterioso " Mirror Man ", aparece en LA - Ilusión 360 - Arte más impresionantes del mundo , Diseño , Tecnología y Video When I first looked at the photos of “mirror man,” I thought it was a sculpture. But photographer SilverSky took these pictures and commented: “I was in LA and this guy shows up in a suit from head to toe made of glass. I thought it was pretty cool.” So now it is clear, that it is a man in costume. Update (September 21st, 2010): Thanks to reader Fourfirearts for sending the following information: “the ‘mirror man’ aka ‘The Collector’ is artist Gustav Troger of San Francisco and Vienna. He is in North America now on another ‘The Collector’ tour.” Photos © SilverSky Via LikeCool