The Future of Advertising Will Be Integrated 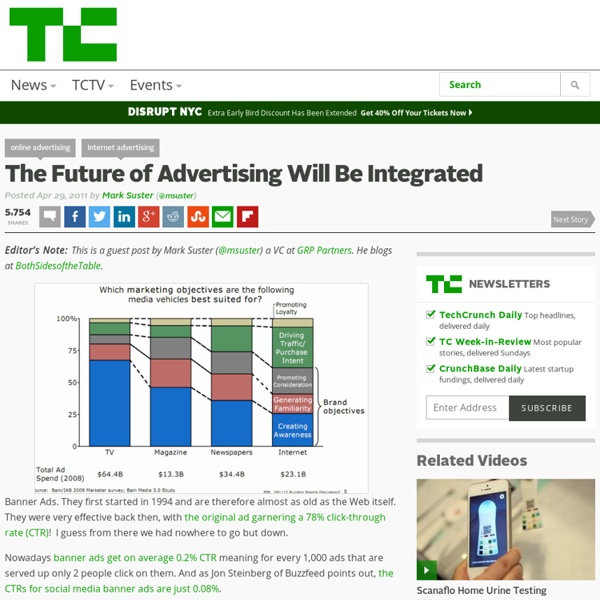 Editor’s Note: This is a guest post by Mark Suster (@msuster) a VC at GRP Partners. He blogs at BothSidesoftheTable. Banner Ads. They first started in 1994 and are therefore almost as old as the Web itself. They were very effective back then, with the original ad garnering a 78% click-through rate (CTR)! Nowadays banner ads get on average 0.2% CTR meaning for every 1,000 ads that are served up only 2 people click on them. Holy Shiitake! Despite its creation more than 15 years ago, banner ads have been surprisingly resilient despite their lack of efficacy. The fundamental problem with banner ads is a condition called “banner blindness” meaning that our eyes are really quickly trained to look at what is most relevant on the page – the content we want to see. I’m sure it probably resonants with how most of you read the web. So I’ve spent the last few years checking out companies that are trying to solve for this problem. You’ll see a clear problem here. Integrated Advertising In Image Ads

3 Tips To Boost Sales And Bring In New Customers The Economics of Attention: Why There Are No Second Chances on the Internet : Tech News and Analysis « In my last Om Says, Why Some Apps Works and Some Don’t, I started to explore one of my core theses — the growing importance of the economics of attention and how it relates the success and failure of Internet (and mobile) applications. I believe that the economics of attention is much more ruthless and unforgiving than the real economic underpinning of a product. What I mean is that you can find money for your company from an investor, but it wouldn’t really matter if you don’t have users’ attention. This is a hard reality that has been obvious in highly competitive and somewhat subjective marketplaces. Hollywood movies, music and even fashion are markets where “attention” determines the outcome. No Second Chances And just as it is hard for a movie to recover from a bad opening weekend, today’s “apps” are likely to lose their place in the marketplace if they don’t make a good first impression. MVP + Happiness + Utility = Early Traction Sareen makes a good point. What Doesn’t Work?

Online Ad Revenue Continues to Rise Internet advertising revenue continues to rise, according to a report released Wednesday by the Interactive Advertising Bureau and PricewaterhouseCoopers. Advertising revenue for the full year reached a record high of $26 billion, a 15 percent increase over 2009. Revenue for the fourth quarter increased 16 percent to $7.45 billion from the same period last year and was the fifth consecutive quarter exhibiting growth. “We are probably out of the woods when it comes to the impact of the great recession,” said Sherrill Mane, the senior vice president of industry services at the IAB. Despite a slight decrease in overall revenue share, search advertising was still the most popular ad format with $12 billion ad dollars spent in 2010, representing nearly half of the overall ad revenue. For the first time, the report estimated the revenue for mobile advertising — including search and display ads delivered through tablets and smart phones — at between $550 million and $650 million.

5 Mobile Marketing Tips: Lessons From A Chase Bank QR Code Online Advertising Goes Open Source inShare0 A Q&A with Chris Davey, senior vice president and managing director of SapientNitro. Programmatic buying of digital media across exchanges is going through an accelerated growth phase. Recognizing the enormous benefits for the entire industry, companies on the buy and sell sides have dropped their competitive biases to create the OpenRTB Consortium. The group's mission is to improve ad technology adoption and integration through the creation of open, flexible, and safe industry standards. I recently had the opportunity to sit down with Chris Davey, senior vice president and managing director of SapientNitro. Mike Baker: Sapient is a really unique company, since you offer agency services, IT consulting, and even financial trading systems. Chris Davey: Absolutely. To complete this evolution, I believe the marketplace needs to adopt a set of open standards that allow buyers and sellers of inventory to interact more efficiently. CD: Yes I do.

How advertising cookies let observers follow you across the web Back in December, documents revealed the NSA had been using Google's ad-tracking cookies to follow browsers across the web, effectively coopting ad networks into surveillance networks. A new paper from computer scientists at Princeton breaks down exactly how easy it is, even without the resources and access of the NSA. The researchers were able to reconstuct as much as 90% of a user's web activity just from monitoring traffic to ad-trackers like Google's DoubleClick. Tor was the only tool that escaped the researchers' dragnet As it turns out, trackers are displaying a surprising amount of information in public. The result is, for a given pageview, it's surprisingly easy to trace back to a person's name and the other pages they've visited.

Build a Business Contest 2011 Launch your online store with a 14-day free trial Already have a Shopify store? Join the competition Important Competition Details Competition registration runs from Sept. 22, 2014 to March 31, 2015, but you can sign up any time. Still have more questions? View the full Competition Rules or the FAQ for more information. Attributing Brand Advertising Effectiveness – July 15, 2011Posted in: Advertising, U.S. Traditional methods of attributing the effects of digital advertising, such as last-click (commonly used to measure the impact of direct response advertising) and last exposure (commonly used to measure the impact of branding advertising) rely on overly simplistic, flawed methods. This means that insights are often inaccurate and not actionable for marketers, agencies and publishers. comScore has developed a methodology, currently being applied to AdEffx Brand Survey Liftâ„¢ studies in the United States, called Smart Lift Attribution Model, whichÂ overcomes many of the shortcomings associated with â€˜last exposureâ€™ measurement approaches. Check out this infographic to get a better understanding of how it works and what this means for you and your business:

The future of online advertising I gave a talk on Thursday at the AppNexus Summit in front of a few hundred digital advertising types. The first part of the talk was a macro overview, but when the Q&A session started, all that anybody wanted to talk about was my take on online media. And given how granular the discussions over the course of the rest of the day were going to be, I wanted to push back a bit against some of the unexamined assumptions which I encounter most of the time when I meet online-media people. The first is that there’s something necessary and inevitable about ad-driven models dominating the online media industry. Meanwhile, people were happily paying small sums for newspapers, for magazines, for coffee, for any number of fast-moving consumer goods. So one of the big reasons why online advertising has done so well is simply the negative one: online micropayments were a disaster, and never took off. So what’s an advertiser to do, online? In a digital world, we believe brands can be signals.

Want to Build a Great YouTube Channel? Orabrush Reveals the 4 Essentials for Video Marketing Success 5 Tips for Closing a Sale on Facebook Sean Cook is CEO of ShopVisible LLC. With more than 11 years of experience in online marketing, management and new technology innovation, Cook translates ShopVisible’s premier e-commerce platform solution into bottom line results for clients. Social ecommerce is becoming more and more important on networks like Facebook. More than another "new frontier," it is attracting innovative marketers that are taking advantage of new technologies and responding to their consumers. Working with fans to create unique shopping and sharing opportunities empowers the kind of viral experiences that were fundamental to Facebook’s own rapid growth and consumer engagement. But how can you maximize the social network to close sales for your own business? 1. Your Facebook store should be different from your main website. 2. Facebook is the perfect environment to create a compelling and collaborative buying experience. 3. 4. People like familiarity, especially when it comes to their financial data. 5.