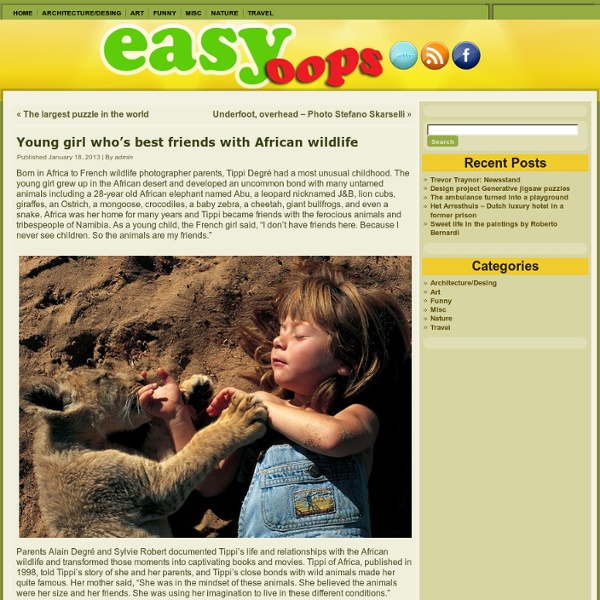 Born in Africa to French wildlife photographer parents, Tippi Degré had a most unusual childhood. The young girl grew up in the African desert and developed an uncommon bond with many untamed animals including a 28-year old African elephant named Abu, a leopard nicknamed J&B, lion cubs, giraffes, an Ostrich, a mongoose, crocodiles, a baby zebra, a cheetah, giant bullfrogs, and even a snake. Africa was her home for many years and Tippi became friends with the ferocious animals and tribespeople of Namibia. As a young child, the French girl said, “I don’t have friends here. Because I never see children. So the animals are my friends.” Parents Alain Degré and Sylvie Robert documented Tippi’s life and relationships with the African wildlife and transformed those moments into captivating books and movies. Looking past some fairly obvious and natural parental worries, Tippi had the most amazing upbringing.

Beautiful Black and White Animals Photos on Snow The weather gets colder, days get shorter and leaves turn color and fall off the trees. Winter is here. Snow covers the ground. 60 mind-bending rock formations from around the world [PICs] Much like rare cloud formations, these rocks, stacks, pillars, caves, cliffs, massifs, volcanic plugs, karsts, arches, hoodoos, and concretions illustrate the tremendous diversity present in all Earth systems. Once you’re fired up by the images below, check back to our rock climbing page + destination pages to plan your next expedition.

Surreal Photography by Robert and Shana Parkeharrison Everything seems to be possible in Robert and Shana‘s compositions… ↑ Back to top Famous Quotes are Paired with Clever Illustrations Kuala Lumpur, Malaysia-based illustrator Tang Yau Hoong has just released a brand new series where he pairs one of his older illustrations with a famous quote. A few years ago, we discovered Hoong and we quickly became fans after we saw his ability to cleverly incorporate negative space into many of his works. As he told us then, "I enjoy making illusion art because it has the ability to mislead us. We rely on sight in our lives and yet it is so fragile that we could easily be deceived by what we see." In one of our favorite new prints, Hoong takes one of Steve Jobs' famous quotes, "Stay Hungry, Stay Foolish" and illustrates it by putting two half eaten apples next to each other.

Pixar’s 22 Rules of Storytelling These rules were originally tweeted by Emma Coats, Pixar’s Story Artist. Number 9 on the list – When you’re stuck, make a list of what wouldn’t happen next – is a great one and can apply to writers in all genres. You admire a character for trying more than for their successes.You gotta keep in mind what’s interesting to you as an audience, not what’s fun to do as a writer. They can be very different.Trying for theme is important, but you won’t see what the story is actually about til you’re at the end of it. Now rewrite.Once upon a time there was ___. Every day, ___.

Neon Luminance ‹ From The Lenz Landscapes lit up by glow sticks, lasers, road flares, headlamps, and moonlight. Click Image to view in Full screen. Like a freak midnight rainbow, this ongoing series of lit waterfalls titled Neon Luminance is part of a collaboration between Sean Lenz and Kristoffer Abildgaard over at From the Lenz. The duo dropped high-powered Cyalume glow sticks in a variety of colors into various waterfalls in Northern California and then made exposures varying from 30 seconds to 7 minutes to capture the submerged trails of light as the sticks moved through the current. To accomplish some of the more complicated shots they strung several sticks together at once to create different patterns of illumination. For those of you concerned about pollution, the sticks (which are buoyant) were never opened and were collected at the end of each exposure, thus no toxic goo was mixed into the water.

Breathtaking Long Exposure Photography and How to Capture It As you know, our first free e-Book was launched and so we were all, including me, busy making Photoshop resources. Thanks to you, the e-Book has met with a landmark success. Now I am free to focus on the other subjects as well. 10 People Who Survived Your Worst Nightmares Miscellaneous There are certain sets of circumstances, should you ever find yourself in them, where the most reasonable course of action is to reflect on what a good life it’s been and prepare to check out. We all like to hear nail-biting stories of those who beat the odds and managed to overcome certain death, but these stories are of course highly statistically unlikely—that’s why it’s called “certain death”. monk shares a meal with a tiger photo Random photo Submit your photo Stumble Thru