The Amazing Art of Tzviatko Kinchev - Draw As A Maniac 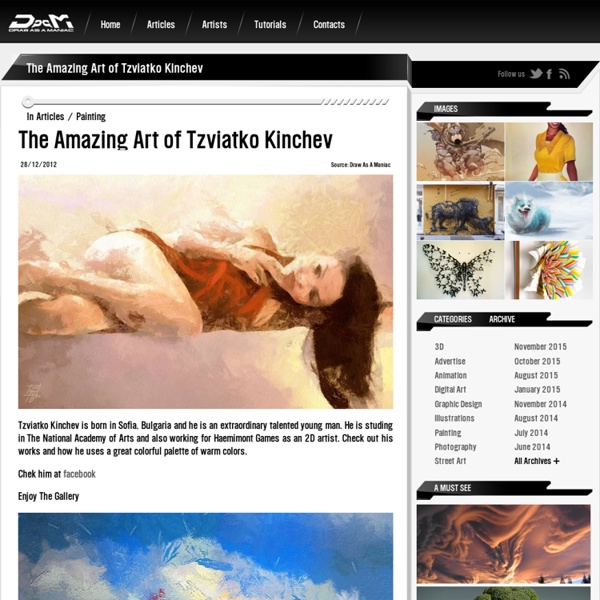 Tzviatko Kinchev is born in Sofia, Bulgaria and he is an extraordinary talented young man. He is studing in The National Academy of Arts and also working for Haemimont Games as an 2D artist. Check out his works and how he uses a great colorful palette of warm colors. Chek him at facebook Enjoy The Gallery These are definitely masterpieces that would appreciate with time. Hi! How do I view and purchase prints? Ana, Bob, I purchased original prints directly from the painter, from his FB profile so beautiful Beautiful work. amazing! i think the way you use light and composition is amazing. i really do love your work. you (i mean your art) is one of the things i am gonna study . thanks! Mesmerizing! your art work is very amazing i need some more of your art for my inspiration I like too yours does touch me me , really. Help us grow and remove all ads Leave a Reply

Judith Ann Braun's Fingers Are Magical With an art career spanning more than three decades, Judith Ann Braun has tested the limits of her artistic musculature. She began as a self-described “realistic figure painter,” and worked through the struggles common to anyone who endeavors upon an artistic pursuit, that of searching for one’s own voice in the chosen medium. Fast forward to the 21st century where the evolution of Braun’s work has brought us to the Fingerings series, a collection of charcoal dust landscapes and abstracts “painted” using not brushes but her fingertips. Share With Your Friends

Contemporary Mythology by Caitlin Hackett Born in 1986, Caitlin Hackett is a Brooklyn, New York based artist, illustrator and creature concept designer. In her work, Hackett explores the relationship between humans and animals; the idea of the human denial of our animal nature and of humans as the dominant species, as well as the mutation of the animal created by the human interpretation of the animal. “I invent creatures, anthropomorphic, mutated, or pseudo mythical in imagery, using my imaginary world and bringing it into the physical world in an attempt to create a language that speaks about the human animal relationship and the natural and unnatural elements of it. I am faced with the fact that we live in a planet in decline, where almost every natural ecosystem in the world is slipping away. Human kind has created a planet of refugees; animals forced to flee ever farther from the insatiable encroachment of urban development, victims of a war for space which they cannot hope to win. Check her at www.caitlinhackett.com

Banksy - Guerilla art wrapped in mystery and controversy [35 pics Banksy Truck Photo credit: Banksy Banksy, an anonymous England based graffiti artist, political activist, film director and painter, is probably the most popular, yet most mysterious, urban street artist in the world. He has become an internationally known as a subversive graffiti artist – yet manages to maintain a secret identity. However, many newspapers assert that his real name is Robert or Robin Banks. He has dozens of celebrity collectors including Brad Pitt, Angelina Jolie and Christina Aguilera. Hint: Use “J” and “K” keys (after the page finish loading) to navigate from picture to picture. Banksy art: Picnic At the guerilla artist Banksy’s L.A. show in 2006, Angelina Jolie spent nearly $400,000 on three pieces of his work. Banksy art: Laugh now but one day we’ll be in charge Banksy art: The bad artist imitate, the good artist steal Photo credit: Banksy Banksy street art: escaping Banksy art: Maid Banksy art: Choppers with pink ribbon Banksy art: Flowerchucker Photo credit: Banksy

Kekai Kotaki - Illustrator Born and raised on the Big Island of Hawaii, Kekai has always had a passion for art. Finding the sunshine and beautiful scenery distracting, he moved to dreary Seattle in 2000 to attend art school. After graduating, he proceeded to attempt a career at doing art. Chek him at www.cghub.com Enjoy The Gallery Awesome! Hi im a 27yr old individual that has a passion for video games and art my art level is not where it should be at. Thanks for your time hope to here from u soon Bertram. Fantastic! Leave a Reply