Robert Reich: America is headed full speed back to the 19th century 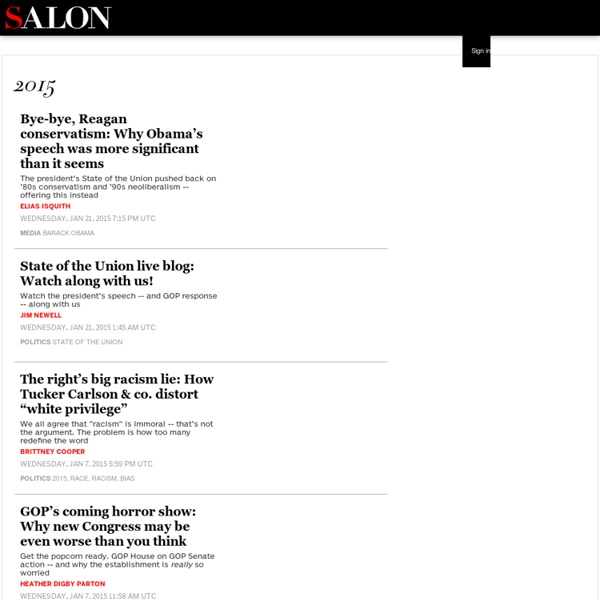 Related:  New Economic system/trends and new paradigms • More of the 'A's to 'Z'rs'

What the Smartest Tech Investors Have Said About Bitcoin — ZapChain Magazine We have put together a collection of what some of the smartest people in technology have said about Bitcoin. If you find these quotes valuable, click the “Recommend” button at the bottom of the article. This will help ensure that more people see this information. 1. Marc Andreessen Marc is an entrepreneur turned investor. “Bitcoin for micropayments: Easy to get started now (checkout Coinbase). 2. Fred is the co-founder of Union Square Ventures, an incredibly well respected and successful venture firm in New York. “People need to feel comfortable that if they hold onto a Bitcoin for a week it’s going to be worth pretty much the same as when they got it. 3. Chris is a partner at Andreessen Horowitz. “I started getting interested in Bitcoin about two years ago.

Son Buys 'Angry Grandpa' A House, No Pranks Attached Angry Grandpa just got a little nicer. In a new clip of "The Angry Grandpa Show," the real-life YouTube series featuring a volatile grandfather and his prankster son, Angry Grandpa gets a house as a gift from his son Michael. At first, Angry Grandpa, aka Charles Green, 64, of Charleston, South Carolina, is led to believe that Michael and his girlfriend are looking at the house for themselves. But then Michael gives him the key. Angry Grandpa and Michael like to play practical jokes on each other, so the older man is doubtful at first. The clip has quickly earned millions of views. But we suspect the Internet would soon miss the toy-room-destroying, guitar-smashing Angry Grandpa. H/T Elite Daily

In Greece, two rival reform agendas battle for Europe′s future | Business | DW.DE | 11.02.2015 News reports thrive on simple dualities. In the headlines, the on-going contest of wills between Greece's new Syriza government and Eurozone leaders is often reduced to a simple story of "Greeks" who reject reforms and don't want to pay up, versus "Germans" who insist that Greece must honor the deal it previously agreed to. What's rarely discussed is what specific reforms were agreed to, and whether they're successfully reviving the Greek economy - or if not, why not. Even less discussed is the fact that the new Syriza government is not anti-reform. Competing visions of reform The real contest isn't over whether or not to reform. On the right hand, we have a radical neoliberal capitalist agenda imposed on Greece by Europe's dominant centre-right political class, whose interests were represented in Greece's 2010 and 2012 bailout negotiations by the troika of International Monetary Fund, European Central Bank and European Commission. Varoufakis wants tougher reforms than the troika's

Tom Selleck Accused Of Stealing Water For California Ranch LOS ANGELES (AP) — A water district has sued Tom Selleck, claiming the star of the crime shows "Magnum, P.I." and "Blue Bloods" stole truckloads of water from a public hydrant and took it to his ranch in drought-stricken California. The Calleguas Municipal Water District in Ventura County claims a tanker truck filled up at a hydrant more than a dozen times and hauled water to a 60-acre ranch owned by Selleck in Westlake Village. The Los Angeles Times says Selleck grows avocados at the ranch. The district also says it spent nearly $22,000 to hire a private investigator to document the alleged thefts that date back two years. The Ventura County Sheriff's Department also investigated and was unable to establish that a crime occurred, Capt. Representatives for Selleck did not return phone messages and emails seeking comment Wednesday. The lawsuit was submitted to Ventura County Superior Court on Tuesday. The suit does not specify how much water was taken.

Kallis-The-Degrowth-Alternative.pdf Bristol Palin fires back at “giddy a$$hole” critics: “This pregnancy was actually planned” I guess she wouldn’t be a Palin if she didn’t come out swinging and then double down on her combative stance. Last week, Palin daughter Bristol made a surprise announcement on her Patheos blog, stating she is pregnant again and that “I do not want any lectures and I do not want any sympathy.” She also admitted that “Honestly, I’ve been trying my hardest to keep my chin up on this one. Predictably, an uproar — much of it schadenfreude related — ensued. Palin does have an unapologetically anti-choice history, but her flair for forgetting her advocacy for abstinence surely can’t just be chalked up to pregnancy brain fog. A 24 year-old, until recently engaged-to-be-married woman with one child already is entitled to change her mind about how sexually active she wishes to be. What Palin seems to steadfastly refuse to do, however, is own up to what exactly she thinks the “disappointment” and the “mistake” here were.

FT Web App James Shotter in Frankfurt Deutsche Bank was hit by a €330m charge to cover claims arising from consumer loan contracts but still posted better than expected results for the fourth quarter. In the last three months of 2014, Germany’s largest bank recorded a net profit of €441m, or €0.31 a share, up from a net loss of €1.37bn in the same period a year earlier. Analysts had forecast that Deutsche would post a net loss of €157m for the last three months of the year, mainly because they were expecting the bank, which is embroiled in an array of investigations, to bolster its litigation provisions by €772m. In the event, Deutsche took legal provisions of just €207m. “Appropriate provisions for loan processing fees were created in 2014. Anshu Jain and Jürgen Fitschen, co-chief executives, said they were “encouraged” by the bank’s results, which, as well as lower litigation provisions, were also boosted by lower provisions for credit losses and a one-off income tax gain of €189m.