De-anonymisation. What the cyber language in the State of the Union means to you. On Tuesday night, president Barack Obama appeared before the American people and again acknowledged digital data theft and data destruction as one of the most important issues facing the nation. 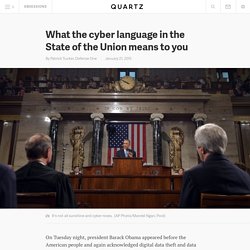 “No foreign nation, no hacker, should be able to shut down our networks, steal our trade secrets, or invade the privacy of American families, especially our kids. We are making sure our government integrates intelligence to combat cyber threats, just as we have done to combat terrorism. And tonight, I urge this Congress to finally pass the legislation we need to better meet the evolving threat of cyber-attacks, combat identity theft, and protect our children’s information.”

It was a rallying cry for greater “cyber security.” But according to many security experts, “security” and the specific cyber-security proposal the president unveiled last week could be a pretext for expanded, unchecked surveillance that may not actually make the nation safer. Academic Freedom and the Right to Remain Anonymous Online. We are the founders of PubPeer.com, an online forum for scientific discussion of research scholarship. 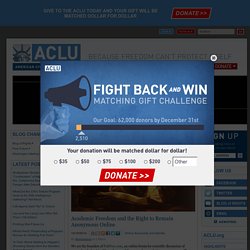 We and many of the users of our website are anonymous. The Right to Anonymity is a Matter of Privacy. January 28th is International Privacy Day. 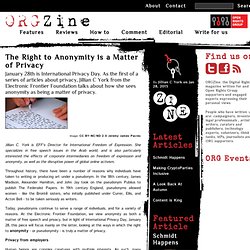 As the first of a series of articles about privacy, Jillian C York from the Electronic Frontier Foundation talks about how she sees anonymity as being a matter of privacy. Image: CC BY-NC-ND 2.0 Jeremy James Pacres Jillian C. York is EFF's Director for International Freedom of Expression. 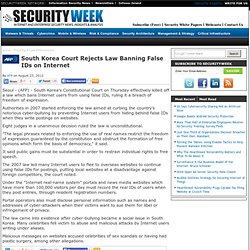 Authorities in 2007 started enforcing the law aimed at curbing the country's notorious cyber-bullying by preventing Internet users from hiding behind false IDs when they write postings on websites. Eight judges in a unanimous decision ruled the law is unconstitutional. "The legal phrases related to enforcing the use of real names restrict the freedom of expression guaranteed by the constitution and obstruct the formation of free opinions which form the basis of democracy," it said. It said public gains must be substantial in order to restrain individual rights to free speech.

The 2007 law led many Internet users to flee to overseas websites to continue using false IDs for postings, putting local websites at a disadvantage against foreign competitors, the court noted. Why Anonymity Matters.

People Using Pseudonyms Leave Better Blog Comments [STUDY] People who use pseudonyms - as opposed to remaining anonymous or using their real identity - are more likely to leave high-quality comments on blogs and other Web sites, according to data released by Disqus. 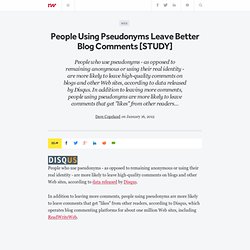 In addition to leaving more comments, people using pseudonyms are more likely to leave comments that get "likes" from other readers, according to Disqus, which operates blog commenting platforms for about one million Web sites, including ReadWriteWeb. Not only does the data throw the conventional web wisdom that people who use their real names leave better comment into question, it also gives Disqus and other comment platforms leverage to compete with Facebook, which has made inroads into the commenting space by allowing sites to let people leaving comments use their Facebook identities.

Who was that masked man? Court protects anonymity of Internet users : Canadian Technology & IP Law. David Elder - In the latest chapter in a $6 million defamation suit by a former mayor, an Ontario court has refused to order the disclosure of the identities of three individuals who used pseudonyms to post to an online forum. 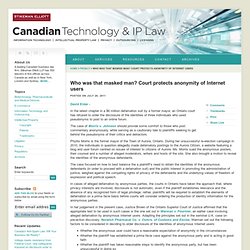 The case of Morris v. Johnson should provide some comfort to those who post commentary anonymously, while serving as a cautionary tale to plaintiffs seeking to get behind the pseudonyms of their critics and detractors. Phyllis Morris is the former mayor of the Town of Aurora, Ontario. “For Those Who Don’t Want To Believe”

MyNameIsMe. Danahboyd. Jon Pincus. Randi Zuckerberg. ﻿﻿"Million" Persona March on Google. Diversity and Google+: Why it Matters. You can’t hide—from anybody. Face recognition: Anonymous no more. We must fight for both anonymity and respect. There are anonymous cowards on the internet who abuse others, spread hatred and distribute obscene criminal material. 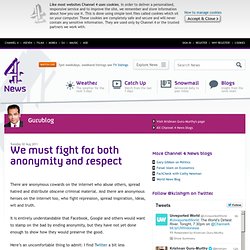 And there are anonymous heroes on the internet too, who fight repression, spread inspiration, ideas, wit and truth. A Case for Pseudonyms. Pseu·do·nym [sood-n-im] –noun a fictitious name used by an author to conceal his or her identity; pen name. 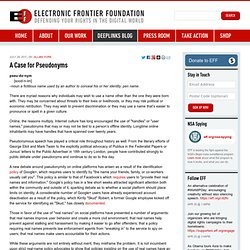 There are myriad reasons why individuals may wish to use a name other than the one they were born with. They may be concerned about threats to their lives or livelihoods, or they may risk political or economic retribution. A Case for Pseudonyms. Cross-posted from the EFF’s Deeplinks blog, authored by me, and made available under a CC by 3.0 license. 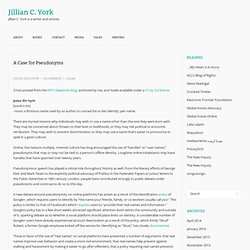 The freedom to be who you want to be… Posted by Alma Whitten, Director of Privacy, Product and Engineering Peter Steiner’s iconic “on the Internet, nobody knows you’re a dog” cartoon may have been drawn in jest--but his point was deadly serious, as recent events in the Middle East and North Africa have shown. 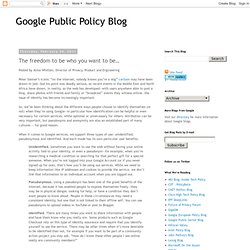 Zuckerberg: Anonymity Online. Against anonymity. Google+, Privacy, and Balancing Identity. Blog Update (July 26, 2011): Real Names, Guilt, Self-Censorship, and the Identity War. Google+ and the loss of online anonymity. Bitcoin is not Anonymous. Robert Scoble. Tor Project: Anonymity Online. Despite hoaxes, anonymity remains important. Would Anonymity Help Activists on Facebook? A Response to Luke Allnutt. Luke Allnutt has a thoughtful piece on RFE/RL asking the above question: Would anonymity help activists on Facebook? His response, “maybe not,” relies on the idea that anonymity would be extended only to those with special “activist status,” something I haven’t heard concretely argued as a potential model but which is nonetheless troubling. Jillian C. York. Google Plus Deleting Accounts En Masse: No Clear Answers.