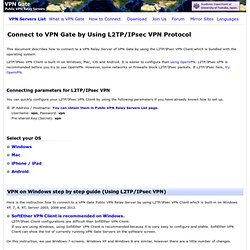 L2TP/IPsec VPN Client is built-in on Windows, Mac, iOS and Android. It is easier to configure than using OpenVPN. Download Tor. Want Tor to really work? 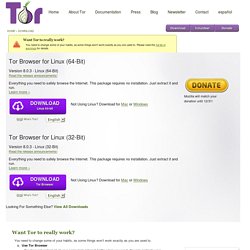 You need to change some of your habits, as some things won't work exactly as you are used to. Please read the full list of warnings for details. Tor Browser for Windows (64 bit) Version 8.0.3 - Windows 10, 8, and 7. Bypass web filters (websense, 8e6, smartfilter, lightspeed, etc.) with tips from Peacefire.org. 5 Ways To Download Torrents Anonymously. With anti-piracy outfits and dubious law-firms policing BitTorrent swarms at an increasing rate, many Bittorrent users are looking for ways to hide their identities from the outside world. 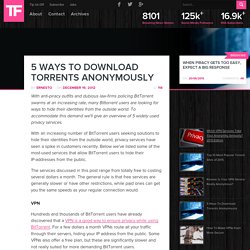 To accommodate this demand we'll give an overview of 5 widely used privacy services. With an increasing number of BitTorrent users seeking solutions to hide their identities from the outside world, privacy services have seen a spike in customers recently. Below we’ve listed some of the most-used services that allow BitTorrent users to hide their IP-addresses from the public. The services discussed in this post range from totally free to costing several dollars a month. The general rule is that free services are generally slower or have other restrictions, while paid ones can get you the same speeds as your regular connection would. PirateBrowser - No More Censorship! KickassTorrents Homepage – latest updates and reviews. How The Pirate Bay Plans to Beat Censorship For Good. The Pirate Bay's PirateBrowser just hit 2.5 million downloads but the notorious torrent site has much bigger plans in store for the new year. 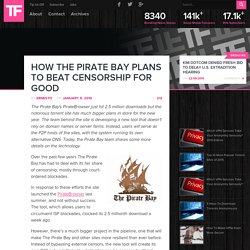 The team behind the site is developing a new tool that doesn't rely on domain names or server farms. Instead, users will serve as the P2P hosts of the sites, with the system running its own alternative DNS. Today, the Pirate Bay team shares some more details on the technology. Over the past few years The Pirate Bay has had to deal with its fair share of censorship, mostly through court-ordered blockades. In response to these efforts the site launched the PirateBrowser last summer, and not without success. However, there’s a much bigger project in the pipeline, one that will make The Pirate Bay and other sites more resilient than ever before.

“The goal is to create a browser-like client to circumvent censorship, including domain blocking, domain confiscation, IP-blocking. How to Completely Anonymize Your BitTorrent Traffic with a Proxy. How to torrent anonymously with the Six Strikes law - Seedbox Guide. Five top US internet service providers are, as of the 25th of February, now monitoring your internet traffic for torrent activity. 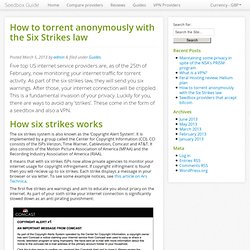 As part of the six strikes law, they will send you six warnings. After those, your internet connection will be crippled. This is a fundamental invasion of your privacy. Luckily for you, there are ways to avoid any ‘strikes’. These come in the form of a seedbox and also a VPN. The six strikes system is also known as the ‘Copyright Alert System’. It means that with six strikes ISPs now allow private agencies to monitor your internet usage for copyright infringement. The first five strikes are warnings and aim to educate you about priacy on the internet. Rather than get a new internet service provider, it’s possible to stick with your current provider and conceal your online activity. Seedbox. How to use blocked proxies and torrent sites « KickassTorrents Homepage – latest updates and reviews.

After several file sharing websites have been made unavailable by ISPs in the UK, loads of proxies emerged to make sure that individuals could still get access. 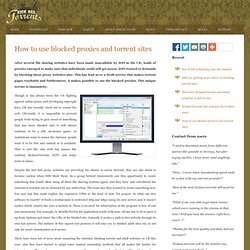 ISPs reacted to demands by blocking those proxy websites also. This has lead us to a fresh service that makes torrent pages reachable and furthermore, it makes possible to use the blocked proxies. This unique service is Immunicity. Though it has always been the US fighting against online piracy and developing copyright laws, UK has recently stood out to censor the web. How to Stay Anonymous While Using Bittorrent: 7 Steps. Edit Article Most anti-piracy outfits and other organizations that track BitTorrent users rely on information they obtain from BitTorrent trackers. 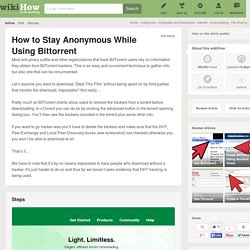 This is an easy and convenient technique to gather info, but also one that can be circumvented. Let’s assume you want to download ‘Steal This Film’ without being spied on by third parties that monitor the download. Impossible? Not really… Pretty much all BitTorrent clients allow users to remove the trackers from a torrent before downloading. If you want to go tracker-less you’ll have to delete the trackers and make sure that the DHT, Peer Exchange and Local Peer Discovery boxes (see screenshot) are checked otherwise you you won’t be able to download at all. That’s it…