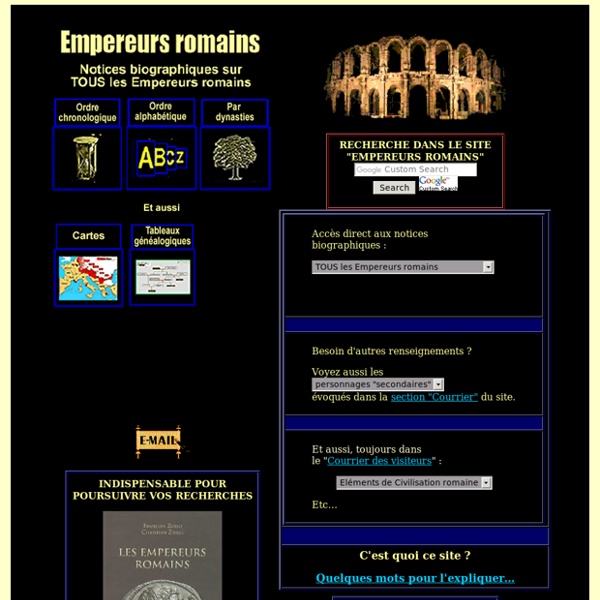 Animating the Battles and Mythology of Greek Vases “Combat,” part of the Ure Discovery series from Panoply animating Greek vases (GIF Hrag Vartanian/Hyperallergic, via YouTube) Greek vases have some of the most lively of ancient art with their flat figures engaged in combat, sports, and epic mythology. A duo called Panoply has been turning these vases into animations to explore their stories and make classical archaeology more engaging for a younger crowd. Still from “Clash of the Dicers” (2014) (GIF Hrag Vartanian/Hyperallergic, via YouTube) Animator Steve K. Lacus Curtius - Some Maps of The Roman Empire The maps on this section of my website are taken from an unidentified late 19c English-language school atlas of the Roman world. It is not the best atlas, nor do I have the full set of maps or the index. At the time I put them online, I was rescuing them, so to speak, since their owner, Jim Miller, was about to lose his website. Although that did not happen, in July 2001 Mr.

Paint It Black? Understanding Black Figure Pottery We at Ancient History Encyclopedia are fierce about historical accuracy. This often leads to debate and discussion among the AHE team as we try to sort out what really happened in ancient history, when, and why. So when I read our definition on black figure pottery last week, I was extremely confused. Augustus and Tiberius 63 BCE: Gaius Octavius Thurinus was born to Atia, niece of Julius Caesar, who adopted the young man posthumously in his will after his assassination in 44 BCE (click here for a genealogy that is fairly easy to interpret). Known now as Octavian (Gaius Julius Caesar Octavianus), he engaged with Mark Antony in a long struggle for the ultimate power in the Roman world, finally vanquishing the forces of Antony and Cleopatra in the naval battle of Actium in 31 BCE. 38 BCE: Octavian divorced Scribonia (an older woman whom he had married because of her family ties to Sextus Pompey at a time when he needed Pompey's political support) on the very day, it is said, that she gave birth to his only child, a daughter (Julia). He “persuaded” Tiberius Claudius Nero to divorce his young wife, Livia, although she already had a son (Tiberius) and was pregnant with another son (Drusus) at the time. Octavian and Livia were married immediately after both divorces.

LaunchPad: Ancient Greek Vase Production and the Black-Figure Technique Used for the storage and shipment of grains, wine, and other goods, as well as in the all-male Greek drinking party, known as the symposium, ancient Greek vases were decorated with a variety of subjects ranging from scenes of everyday life to the tales of heroes and gods. The two most popular techniques of vase decoration were the black-figure technique, so-named because the figures were painted black, and the red-figure technique, in which the figures were left the red color of the clay. The black-figure technique developed around 700 B.C. and remained the most popular Greek pottery style until about 530 B.C., when the red-figure technique was developed, eventually surpassing it in popularity. This video illustrates the techniques used in the making and decorating of a black-figure amphora (storage jar) in the Art Institute of Chicago's collection. Original video by ArtInstituteChicago. Embedded by Mark Cartwright, published on 04 April 2014.

Caligula March, 37 CE: At about 25 years old, Caligula was named Rome's third emperor, the first direct descendant of Augustus to take the throne (click here for a coin on which Caligula emphasizes this relationship). The reign began with good feelings all around, since Caligula declared an amnesty for all Romans imprisoned or exiled under Tiberius, posthumously restored honor to his mother and brothers, and stopped the treason trials, getting rid of the informers in the process. One month after his accession, his grandmother, Antonia, died. October, 37 CE: Caligula fell seriously ill, with what was described at the time as a “brain fever”; there was great mourning in Rome, and much joy at his recovery. There were a number of freedmen in his close circle who attained considerable influence: Helicon, his chamberlain; Apelles, a tragic actor; and most wealthy and powerful of all, Callistus, a kind of imperial secretary. Sources

Interpretation of the Alexander Mosaic (The following is a quotation from Traute Petersen: Das Alexandermosaik von Pompeji. In: Eberhardt Schwalm (Hrsg.): Folienbuch Geschichte 1. Bilder für den Unterricht. Von den frühen Hochkulturen bis zum 16. Jahrhundert. Stuttgart: Klett-Perthes 1993. The Lod mosaics – a carnival of animals The pace of construction of new buildings, roads, and infrastructure throughout the world has led to a number of spectacular archaeological finds in recent years. Among the most significant is that of a series of Roman mosaic floors at Lod in Israel, almost the centre of interaction between Roman, Christian, Jewish and Muslim culture, accidentally uncovered during road construction in 1996. Dating from around AD300, the mosaics are a riot of birds, shells, fishes and animals and include one of the earliest known images of both a rhinoceros and a giraffe. Although some of the animals appear to be tearing each other apart, they share seraphic, although slightly sinister, expressions, which one historian went so far as to describe as "erotic".

Acropolis Virtual Tour The Virtual Tour of the Acropolis is a web application based on HTML5 technologies (webGL and CSS3D) to display effectively panoramic photographic images in desktop and mobile browsers. The production of panoramic photomosaics at resolutions of several gigapixels was realised between 2010 and 2014 by employing established practices of digital image acquisition and processing. In order to achieve the best possible mapping of natural lighting on the monuments together with the display of shaded details, High Dynamic Range (HDR) imaging techniques were used for capturing and combining different exposure levels of the same theme. Starting from the RAW photos all the way up to the combined and color-corrected finalised panoramas, all intermediate outputs were maintained in order to be able to reproduce and control the entire manufacturing process for future reference. The krpano viewer and revelant tools are used for the display of the panoramic images within the application.