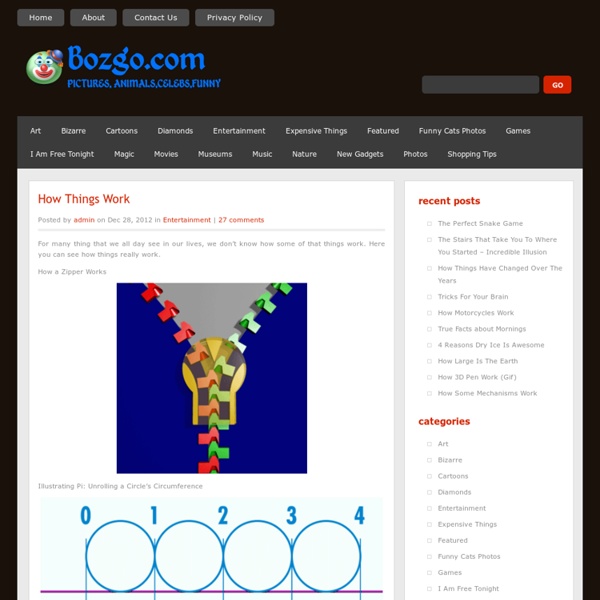 Posted by admin on Dec 28, 2012 in Entertainment | 27 comments For many thing that we all day see in our lives, we don’t know how some of that things work. Here you can see how things really work. How a Zipper Works Illustrating Pi: Unrolling a Circle’s Circumference How a Pill Press Works How Walschaerts Valve Gear in Steam Locomotives Works How a Caliper Works How a Radial Engine Works How the Geneva Drive Works How a Hypotrochoid is Made How an Alpha Stirling Engine Works How a Sewing Machine Works How to Draw a Yin Yang Symbol Using Circles

15 Awesome Chemistry GIFs You don’t need to watch Breaking Bad to know that chemistry is pretty awesome. Below, we explore our favorite 15 chemistry GIFs and the science behind them (when we could figure it out): Melting Metal With Magnets The Science: The copper wire has a significant amount of AC electricity running through it, causing it to act like a really strong electromagnet. In the metal slug, eddy currents form due to the magnetic field the copper wire is causing while the copper wire has high frequency AC flowing through it. The metal slug’s electric resistance causes a portion of the electric energy to turn into heat, but the heat builds up until the metal slug becomes white hot and melts.

Homicide Victims Rarely Talk to Police," and Other Horrible Headlines From a friend, who got them from a friend, who got them from someone else, here’s a collection of newspaper headlines that don’t quite accomplish what the writer set out to accomplish. Anyone who has ever written or published anything can surely sympathize — and laugh. (P.S.: Are any of them real?) Lifes Blueprints: Levis Takes a Cue From Bees To Make Stronger Jeans The discipline of biomimicry—defined by Biomimicry Institute founder Janine Benyus as "a way of seeking sustainable solutions by borrowing life's blueprints, chemical recipes, and ecosystem strategies"—has produced wind turbines shaped like whales' tails, solar panels modeled after butterfly wings, and cities and companies organized after mushrooms. Now Levi's is seeking inspiration in the way bees build their hives to improve the durability and strength of its clothes. The company recently took a multidisciplinary team of designers, technical and sustainability experts from across various departments and sent them out into the Montana wilderness with Benyus to look for ideas. "One thing we looked at was where in nature the reaggregation of fiber is performed," explains Paul Dillinger, senior director of global design for Levi's. "Bees. They collect resins from plants and create cross-linking natural resin to make short fibers.

Footprint Calculator Not Translated How much land area does it take to support your lifestyle? Take this quiz to find out your Ecological Footprint, discover your biggest areas of resource consumption, and learn what you can do to tread more lightly on the earth. <B>The Ecological Footprint Calculator requires requires that JavaScript be enabled. 65 Beautiful Fonts You Can Download For Free Freebie 65 Beautiful Fonts You Can Download For Free by Alex on Aug 9, 2012 • 9:43 am 17 Comments There are so many free fonts all around the web these days and sometimes it makes me think is their any really point purchasing fonts. I’ve decide to collect 65 fonts which are suitable for web, print, etc just overall high fonts which can be used in design projects.

10 Futuristic Materials Lifeboat Foundation Safeguarding Humanity Skip to content Switch to White Physics resources Below are links to Snapshot Science’s physics teaching resources. You may wish to take a look at the accompanying post for an idea of the inspiration for the resource and more details on how to use it in a lesson. These resources are free to download and share. All I ask for in return is a comment to let me know how the resource was used and if it was useful.

Dynamic Optical Illusions - GROW ILLUSION. Stare at the center of the below illusion for about a minute. The longer the better. Then look away and watch you world melt! How Animals See the World The human eye is pretty amazing, but there are some things it cannot do such as see ultraviolet light or detect images at a great distance. The visual capabilities on non-human creatures can help to open our eyes to the possibilities beyond our limited sight. This infographic, published by Mezzmer, looks at vision from some animal’s point of view. [Click here for full size version] Embed This Image On Your Site (copy code below): Did You Know Archive & The assassin bug wears the corpses of its victims like armor. With a name like the assassin bug, you can be sure this is one tough insect. As it turns out though, the assassin bug doesn’t just kill and eat its victims—it also wears their exoskeletons as part of its suit of armor. In a way, this Malaysian bug is probably the closest thing the insect world has to a deranged serial killer.

Rising CO<sub>2</sub> levels linked to global warming during last deglaciation Many scientists have long suspected that rising levels of carbon dioxide and the global warming that ended the last Ice Age were somehow linked, but establishing a clear cause-and-effect relationship between CO2 and global warming from the geologic record has remained difficult. A new study, funded by the National Science Foundation and published in the journal Nature, identifies this relationship and provides compelling evidence that rising CO2 caused much of the global warming. Lead author Jeremy Shakun, who conducted much of the research as a doctoral student at Oregon State University, said the key to understanding the role of CO2 is to reconstruct globally averaged temperature changes during the end of the last Ice Age, which contrasts with previous efforts that only compared local temperatures in Antarctica to carbon dioxide levels. Here is what the researchers think happened. Shakun said there is "an enormous amount" of carbon sequestered in the deep ocean.

60 of the world's happiest facts 1. A group of flamingos is called a flamboyance. 2. If you fake laugh long enough you’ll start to really laugh, really, really hard.

I saw this on Stumbleupon. This is really genius! by xantineday Dec 23