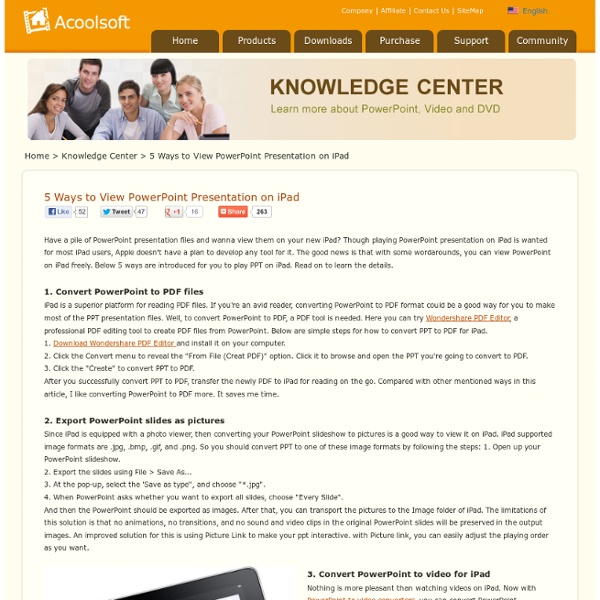 Have a pile of PowerPoint presentation files and wanna view them on your new iPad? Though playing PowerPoint presentation on iPad is wanted for most iPad users, Apple doesn't have a plan to develop any tool for it. The good news is that with some wordarounds, you can view PowerPoint on iPad freely. Below 5 ways are introduced for you to play PPT on iPad. Read on to learn the details. 1. iPad is a superior platform for reading PDF files. 1. 2. 3. After you successfully convert PPT to PDF, transfer the newly PDF to iPad for reading on the go. 2. Since iPad is equipped with a photo viewer, then converting your PowerPoint slideshow to pictures is a good way to view it on iPad. iPad supported image formats are .jpg, .bmp, .gif, and .png. 2. 3. 4. And then the PowerPoint should be exported as images. 3. Nothing is more pleasant than watching videos on iPad. I like this “loseless” way that help me view the video presentation on my iPad. 4. 5.

Alcubierre drive Two-dimensional visualization of the Alcubierre drive, showing the opposing regions of expanding and contracting spacetime that displace the central region. The Alcubierre drive or Alcubierre metric (referring to metric tensor) is a speculative idea based on a solution of Einstein's field equations in general relativity as proposed by theoretical physicist Miguel Alcubierre, by which a spacecraft could achieve faster-than-light travel if a configurable energy-density field lower than that of vacuum (i.e. negative mass) could be created. Rather than exceeding the speed of light within its local frame of reference, a spacecraft would traverse distances by contracting space in front of it and expanding space behind it, resulting in effective faster-than-light travel. History[edit] Alcubierre metric[edit]

30 Specialist (and Super Smart) Search Engines Google is widely (and rightly) recognised as the mother of all search engines. But, if you need to drill down your searches by more specific details, do you trust Google to give you what you need every single time? Here’s a collection of 3o vertical search engines which you should have up your sleeve when you need some specialist power. White–Juday warp-field interferometer Motivation for the experiment[edit] The NASA research team lead by Harold White and their university partners currently aim to experimentally evaluate several concepts, especially a redesigned energy-density topology as well as an implication of brane cosmology theory. If space actually were to be embedded in higher dimensions, the energy requirements could be decreased dramatically and a comparatively small energy density could already lead to a measurable (i.e. using an interferometer) curvature of spacetime.[1] The theoretical framework for the experiment dates back to work by Harold White from 2003 as well as work by White and Eric W. Davis from 2006 that was published in the AIP, where they also consider how baryonic matter could, at least mathematically, adopt characteristics of dark energy (see section below). Theoretical framework[edit] The metric derived by Alcubierre was mathematically motivated by the cosmological inflation.

Daydreaming Beyond the Solar System with Warp Field Mechanics This article was authored by Harold “Sonny” White and Catherine Ragin Williams Sure and is a submission of the Exotic Research Group of Icarus Interstellar. Sure, the Red Planet or an asteroid are enticing destinations, but what if one day we wanted to go really, really far out? With the technology we have today, it’s not in the realm of possibility. 100 Hacks for Every Occasion Sometimes ordinary things can be used in a more creative way. For example, you can use a nail file to remove spots from suede, or a fruit bowl to store random objects. Such hacks make our life easier and help with solving household problems. To make you aware of things you can use in a new, unordinary way, Bright Side collected 100 little tricks which will definitely be useful.

NASA Admits They Are Working To Travel Faster Than The Speed Of Light NASA is currently working on the first practical field test toward the possibility of faster than light travel. Traveling faster than light has always been attributed to science fiction, but that all changed when Harold White and his team at NASA started to work on and tweak the Alcubierre Drive. Special relativity may hold true, but to travel faster or at the speed of light we might not need a craft that can travel at that speed. The solution might be to place a craft within a space that is moving faster than the speed of light! Therefore the craft itself does not have to travel at the speed of light from it’s own type of propulsion system. It’s easier to think about if you think in terms of a flat escalator in an airport.

Wormhole A wormhole, also known as an Einstein–Rosen bridge, is a hypothetical topological feature of spacetime that would fundamentally be a "shortcut" through spacetime. A wormhole is much like a tunnel with two ends each in separate points in spacetime. For a simplified notion of a wormhole, visualize space as a two-dimensional (2D) surface. In this case, a wormhole can be pictured as the 2D surface of a tube that connects different parts of the surface. The mouths of a wormhole are analogous to the holes at either end of the tube in a 2D plane. An actual wormhole would be analogous to this but with the spatial dimensions raised by one, which can be modeled mathematically even if we find it impossible to visualize.

New Wormhole Theory Uses Space Photon Energy “Fluid” A new theory expands on other theories and adds photon energy “fluid” as a way to support wormholes. The introduction to the paper states the following. Wormholes are hypothetical geometrical structures connecting two universes or two distant parts of the same universe. For a simple visual explanation of a wormhole, consider spacetime visualized as a two-dimensional (2D) surface. If this surface is folded along a third dimension, it allows one to picture a wormhole “bridge”. [1]

monedes del món, bitllets In honor of this month's release of the United States' redesigned five dollar bill I have been scouring through the 191 currently circulating currencies of the 192 member states of the United Nations to find some of the most colorful, unique and dramatic bank notes. The New Five Photo from moneycenteral.msn.com The redesigned $5 bill was unveiled on September 20, 2007, and was issued on March 13, 2008. Previously covered here on COLOURlovers, the redesign involves some very noticeable changes, mostly for security reasons, but also in an attempt to make the bill more friendly to the visually impaired. The new five incorporates the use of micro printing of type to make it more difficult to copy.

New data confirms: Neutrinos are still traveling faster than light "It is worth pointing out, however, that the latest arXiv preprint lists 179 authors, while the original lists 174. Would you ever classify five people as "most of" 15? To make things more confusing . . . "four new people" have decided not to sign, according to Science. Now, none of the above numbers may match up . . .."

Gravitational-wave finding causes 'spring cleaning' in physics Detlev van Ravenswaay/Science Photo Library Artist's rendering of 'bubble universes' within a greater multiverse — an idea that some experts say was bolstered with this week's discovery of gravitational waves. On 17 March, astronomer John Kovac of the Harvard-Smithsonian Center for Astrophysics presented long-awaited evidence of gravitational waves — ripples in the fabric of space — that originated from the Big Bang during a period of dramatic expansion known as inflation. By the time the Sun set that day in Cambridge, Massachusetts, the first paper detailing some of the discovery’s consequences had already been posted online1, by cosmologist David Marsh of the Perimeter Institute for Theoretical Physics in Waterloo, Canada, and his colleagues.