CPSP118G Spring 2015 SGC Colloquium: Climate and How It Works III: Cycles in Deep Time. The Reality of Climate Change Dawns A 1565 winter landscape by Pieter Brueghel from Mirades Climate change as a reality of nature: The first reliable thermometers went into use in Italy in the late 17th century. 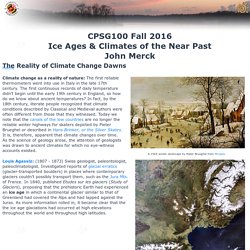 The first continuous records of daily temperature didn't begin until the early 19th century in England, so how do we know about ancient temperatures? In fact, by the 18th century, literate people recognized that climate conditions described by Classical and Medieval authors were often different from those that they witnessed. GEOL342 - Sedimentation and Stratigraphy. Chemostratigraphy: Chemostratigraphy, broadly speaking, is the application of global, regional, and local variations in geochemistry over time to the decipherment of the rock record. 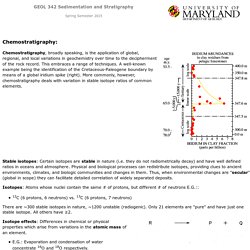 This embraces a range of techniques. A well-known example being the identification of the Cretaceous-Paleogene boundary by means of a global iridium spike (right). More commonly, however, chemostratigraphy deals with variation in stable isotope ratios of common elements. Stable isotopes: Certain isotopes are stable in nature (i.e. they do not radiometrically decay) and have well defined ratios in oceans and atmosphere. Introduction to Physical Geology Syllabus. Land forms resulting from continental glaciers: Continental scale glaciation creates interesting opportunities for ice to interact with large volumes of sediment. 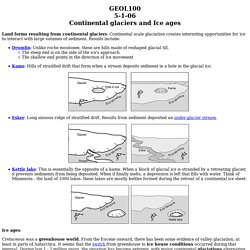 Results include: Drumlin: Unlike roche moutonee, these are hills made of reshaped glacial till.The steep end is on the side of the ice's approach The shallow end points in the direction of ice movement Kame: Hills of stratified drift that form when a stream deposits sediment in a hole in the glacial ice. Esker: Long sinuous ridge of stratified drift. Results from sediment deposited an under-glacier stream. Kettle lake: This is essentially the opposite of a kame. Cryospheric Sciences. What do polar bears and emperor penguins have to do with the Eiffel Tower and Notre Dame? 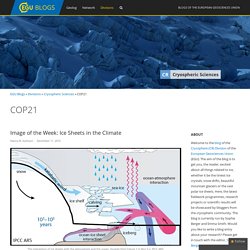 Pole to Paris has the answer. Erlend, the Northern runner, in the Norwegian mountains. Cryospheric Sciences Program: About the Cryosphere. Global Freezing Your Ass Off. Snow & ice. Interactive Art & Computational Design, Spring 2014. Hi! 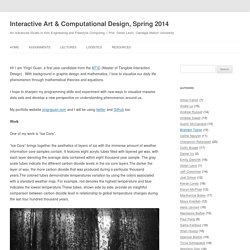 I am Yingri Guan, a first year candidate from the MTID (Master of Tangible Interaction Design) . With background in graphic design and mathematics, I love to visualize our daily life phenomenon through mathematical theories and equations. I hope to sharpen my programming skills and experiment with new ways to visualize massive data sets and develop a new perspective on understanding phenomenon around us. My portfolio website yingriguan.com and I will be using twitter and Github too. YINGRI GUAN. Project description “Ice Core” brings together the aesthetics of layers of ice with the immense amount of weather information core samples contain. 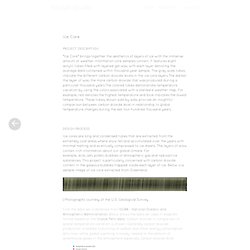 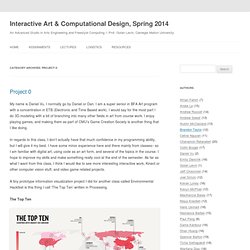 I’m Brandon, a second year phd student in HCI. I studied film and electrical engineering at the University of Texas at Austin as an undergrad and have a master’s from the MIT Media Lab. Before coming to CMU I worked at Samsung in Korea for a few years. Most of my work has been focused towards the hardware end of things (custom sensors, hardware design, gesture recognition) but there is usually a software side (even if it’s just try and see why the hardware isn’t working right). Reflection and transmission of irradiance by snow and sea ice in the central Arctic Ocean in summer 2010. Ruibo Lei,1,2 Zhanhai Zhang,1 Ilkka Matero,3 Bin Cheng,4 Qun Li1 & Wenfeng Huang5 1 Polar Oceanography Division, Polar Research Institute of China, 451 Jinqiao Road, Pudong, 200136 Shanghai, China2 State Key Laboratory of Marine Geology, Tongji University, 1239 Siping Road, 200092 Shanghai, China3 Department of Physics, University of Helsinki, PO Box 48, FI-00014 Helsinki, Finland4 Marine Department, Finnish Meteorological Institute, PO Box 503, FI-00101 Helsinki, Finland5 State Key Laboratory of Coastal and Offshore Engineering, Dalian University of Technology, 2 Linggong Road, 116024 Dalian, China Abstract Reflection and transmission of irradiance by the combined snow and sea ice layer were measured at an ice camp (ca. 10 days) and several short-term stations (ca. 2 h) established in the western sector of the Arctic Ocean above 80°N during the 2010 summer. 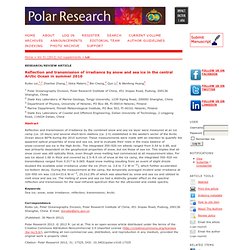 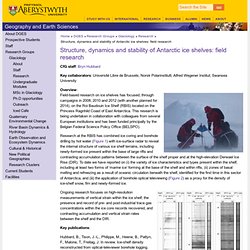 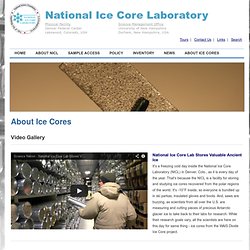 That's because the NICL is a facility for storing and studying ice cores recovered from the polar regions of the world. It's -10°F inside, so everyone is bundled up in ski parkas, insulated gloves and boots. And, saws are buzzing, as scientists from all over the U.S. are measuring and cutting pieces of precious Antarctic glacier ice to take back to their labs for research.

Byrd Polar Research Center at The Ohio State University : Research Groups : Ice Core Paleoclimatology. Cool winter getaways. Earth System Science 21. On Thin Ice. Lecture 15. Glacier Mass Balance Julie Ferguson, Ph.D. Recorded on February 12, 2014. Duration 46:07 published 13 Feb 2014 updated 13 Feb 2014 views 103. Ice Cores, Seafloor Sediments, and the Age of the Earth: Part 1. In an attempt to learn about past climates, scientists have drilled and extracted cylindrical cores from the Greenland and Antarctic ice sheets. Because of the great thickness of these sheets, the cores can have combined lengths of thousands of meters. Permanent ice sheets probably did not exist in the pre-Flood world, but if they had, they almost certainly would have been destroyed during the great Flood. Hence, today’s high-latitude ice sheets have only had about 4,500 years—the time since the Flood—to grow to their present sizes. Yet secular scientists assign very old ages to the ice deep within these cores.

Ice Age Terminations: Orbital Cycles, Ocean Circulation and Shifting Monsoons. A new study has confirmed the astronomical theory of the ice ages, but with a new twist: The shutoff of the meridional ocean circulation, or MOC, and an associated southward shift of tropical monsoon rain belts seems to play an integral role in the melting of glacial period ice sheets.

These changes cause warming of the Southern Hemisphere and a rise in atmospheric CO2 levels, which in turn provides a positive feedback loop that helps drive glacial termination. This is why, every 100,000 years or so, the great Northern Hemisphere ice sheets collapse and glacial conditions give way to a warm interglacial period, such as the Holocene warming humanity is currently enjoying. The Last Interglacial Part Five - A Crystal Ball? Posted on 17 November 2011 by Steve Brown, jg Note: This is the fifth and final article of a five-part series on what we can learn from the Last Interglacial time period. Understanding this period may provide clues on how the environment may respond to similar conditions in the future. 4A: Glacial Ages. Part A: Glacial Ages Temperatures change all the time. Locally, it's not uncommon for temperatures to drop 5, 10, even 20 degrees or more overnight.

Over the course of a year, we see gradual increases in daily and monthly average temperatures as winter eases into spring and summer and watch them fall again as summer turns to autumn and then back to winter. When we look at temperature on a regional or global scale over the course of many years, climatic patterns emerge. Throughout its history, Earth has experienced several periodic swings in climate. Glacial Ages. SNOWBALL EARTH. Glacier Change in the Upper Skagit River Basin: Basics. A glacier is a mass of ice that is thick enough to flow downhill. Its flow is like a thick fluid that requires a threshold of weight before it begins to move. Glaciers form wherever yearly snowfall exceeds the loss of snow. Green Community Exhibit. Green Community. Discovering Antarctica - A-level - Climate change: past and future. How has Antarctica's climate changed in the past? Is Antarctica being affected by 'global warming' and how might we expect its climate to change in the future?

What evidence is needed to address these questions? The Habitable Planet 12 - Earth's Changing Climate - Visuals. Ice Cores for studying Past Climate movie. Video courtesy of the NSF. Climate scientists use "proxy data" to study climates of the past, before humans with thermometers began keeping temperature records. UCAR E&O - Randy Russell - Ice Core Climate Proxies. Ice cores extracted from polar ice sheets and from glaciers worldwide are one type of paleoclimate proxy record - a source of data that tells us about past climates. Special Report - Science Nation. The Physical Characteristics of Extreme Environments - The British Geographer. Arctic Sea Ice Ecology. Stable Isotope Primer and Some Hydrological Applications. Created by Monica Z. Disko Bay Ice Coring Project. You can fill in the blank with whatever you want, but “holy something,” yesterday was spectacular! Paleoclimatology: The Ice Core Record : Feature Articles. Isotope. Ice Core 101. Ice core. How do we know the climate is changing?