Scandinavians invented ice skating in 3000 BC. Constructed of trimmed horse or cow bones, and pierced at one end and strapped to the foot with leather thongs, they were not powered by the classic skating motion but used in tandem with a long stick; skaters straddled the stick and poled themselves along. 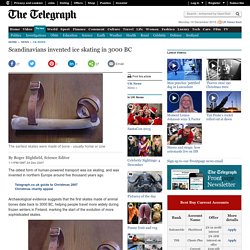 In the Biological Journal of the Linnean Society of London, Dr Frederico Formenti and Professor Alberto Minetti of Oxford University lay out the evidence supporting the idea that the birth of ice skating took place in Southern Finland, where the number of lakes within a given area is the highest in the world. "In Central and Northern Europe, five thousand years ago people struggled to survive the severe winter conditions and it seems unlikely that ice skating developed as a hobby," says Dr Formenti.

"As happened later for skis and bicycles, I am convinced that we first made ice skates in order to limit the energy required for our daily journeys". The virtual ice Skates museum. Animal bones as gliders There is a written 'description of the most noble city of London', drawn up in Latin and published in 1180, which was translated by Stow, a London chronicler, into English in the 16th century. 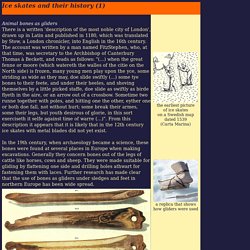 The account was written by a man named FitzStephen, who, at that time, was secretary to the Archbishop of Canterbury Thomas à Beckett, and reads as follows: "(...) when the great fenne or moore (which watereth the walles of the citie on the North side) is frozen, many young men play upon the yce, some striding as wide as they may, doe slide swiftly (...) some tye bones to their feete, and under their heeles, and shoving themselves by a little picked staffe, doe slide as swiftly as birde flyeth in the aire, or an arrow out of a crossbow. In the 19th century, when archaeology became a science, these bones were found at several places in Europe when making excavations. Generally they concern bones out of the legs of cattle like horses, cows and sheep. TheEvolutionOfTheSkate. English figure skaters agreed that a skate blade for figure skating should be the true segment of a circle having a radius of seven feet- some accomplished skaters used a blade with a radius of six feet. 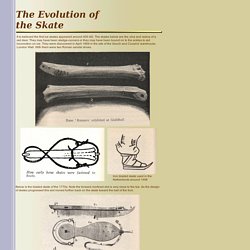 The really good skater could skate on any of the blades in vogue at that time. Formerly, everyone used acute angled edges. About 1875 the members of the London Skating Club had their skates ground to an obtuse angle but this lasted only a few weeks after which they came to the happy medium of right angled blades. Acute angles were so sharp they set up great friction by cutting in too deeply. The obtuse angle blade when used by a heavy man on soft ice was delightful but if the ice was hard they were very slippery. A skate with a curvature of nine feet radius distributed the weight bearing over a larger area but then turns and loops became difficult. Iceskate.com is the official site with all the information about ice skating. Visit the coolest site in the world. Ice Skating. Ice skating is a sport in which people slide over a smooth ice surface on steel-bladed skates. 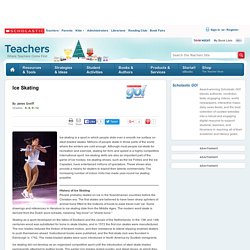 Millions of people skate in those parts of the world where the winters are cold enough. Although most people ice-skate for recreation and exercise, skating for form and speed is a highly competitive international sport. When Were Ice Skates Invented? Today’s Wonder of the Day was inspired by carina from , AL. carina Wonders, “How was skating invented” Thanks for WONDERing with us, carina! 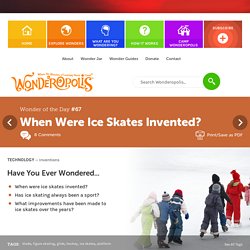 Ice skates have been around for a really long time. An ancient pair of ice skates was found at the bottom of a lake in northern Europe. Scientists estimate the skates may have been worn in about 3000 B.C. The skates were made from the leg bones of large animals. Holes were drilled on each end of the bone, and skaters used leather straps as laces to tie the skates onto their feet. The History of Ice Skates. Historians generally agree that ice skating originated in Ancient Europe, though it's unclear when and where the first ice skates came into use. 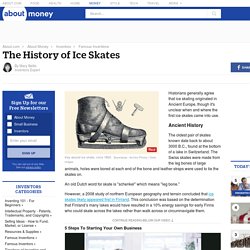 Ancient History The oldest pair of skates known date back to about 3000 B.C., found at the bottom of a lake in Switzerland. The Swiss skates were made from the leg bones of large animals, holes were bored at each end of the bone and leather straps were used to tie the skates on. An old Dutch word for skate is "schenkel" which means "leg bone. " However, a 2008 study of northern European geography and terrain concluded that ice skates likely appeared first in Finland. Continue reading below our video Loaded: 0% Progress: 0% Around the 14th Century, the Dutch started using wooden platform skates with flat, iron bottom runners. Recent History In 1848, E. In 1865, Jackson Haines, a famous American skater, developed the two-plate, all-metal blade.