Sending ice to Antarctica. Scientists are planning to ship ice to the Antarctic. 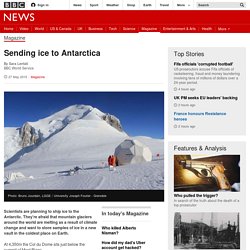 They're afraid that mountain glaciers around the world are melting as a result of climate change and want to store samples of ice in a new vault in the coldest place on Earth. At 4,350m the Col du Dome sits just below the summit of Mont Blanc. Covered in snow, it appears to be a permanent, frozen fixture in the Alps - but looks can be deceptive. Antarctic ice may conceal the world's most massive canyon. Antarctic ice shelf collapse and unstoppable sea level rise 'very likely' without tough climate action, say scientists - Science. Updated Warming of 1.5 to 2 degrees Celsius above current levels could lead to "unstoppable" sea level rise that would last for thousands of years, according to a new model of Antarctic ice sheets. 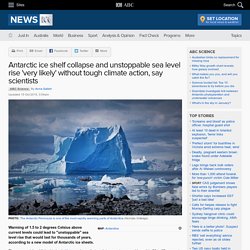 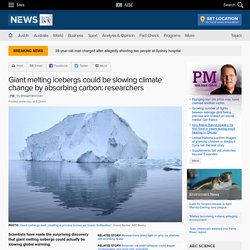 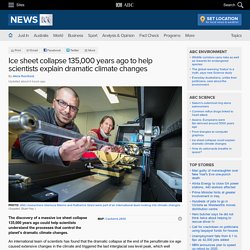 Earth's New Normal: Wild Weather 2014  Each year in early January (2011, 2012, 2013) I have tallied a scorecard on the vicious effects of burning in excess of 85 million tons of carbon fuels daily on our planet. 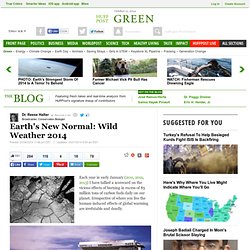 Irrespective of where you live the human-induced effects of global warming are irrefutable and deadly. The Waratah Coal Project is part of the expanding Galilee Basin in western Queensland that will bring Australia's coal export to whopping 240 million metric tons per annum -- a projected increase of five fold under Prime Minister Tony Abbott's new Coalition government. As humans ramp-up the destruction of nature in Australia, Canada, Indonesia and elsewhere to feed the insatiable coal and petroleum markets in China, India and the U.S. the amount of melting ice at both poles continues to erode at an astounding rate. Giant waves found in Arctic Ocean could be accelerating sea ice loss. TC - Abstract - Elevation and elevation change of Greenland and Antarctica derived from CryoSat-2. 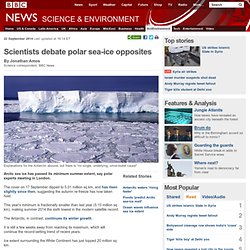 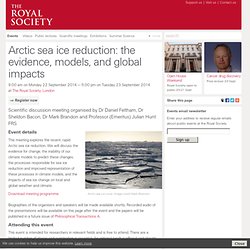 Image credit Mark Brandon Event details. National Snow and Ice Data Center. Antarctic sea ice set for record high as Arctic heads for sixth lowest extent. The extent of sea ice in Antarctica is set to reach a record high, scientists said on Tuesday, as they announced that Arctic sea ice appeared to have shrunk to its sixth lowest level ever. 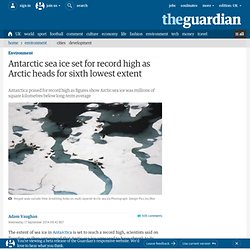 The NSIDC said that satellite data was expected to shortly confirm whether the maximum extent of sea ice at the opposite pole, in Antarctica, had set a new record. “Antarctic sea ice is poised to set a record maximum this year, now at 19.7 million sq km (7.6m sq m) and continuing to increase,” the centre, considered one of the world’s top authorities on sea ice data, said in a statement. Jan Lieser, of the Antarctic Climate and Ecosystems Co-operative Research Centre (CRC), told Australia’s ABC News that: “This is an area covered by sea ice which we’ve never seen from space before.” 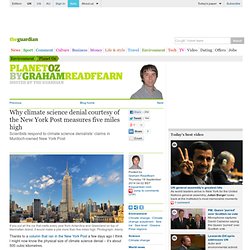 For those still working in imperial measurements (that’s you America), this is about 120 cubic miles. The New York Post column by two climate science denialists claimed that “the ice caps aren’t melting”. Yet a recent assessment published in March 2014 in the journal The Cryosphere used new satellite measurements to estimate that the world’s major ice sheets in Greenland and Antarctica are now shrinking at the rate of about 500 cubic kilometres a year. That’s a lot of ice to deny is melting. Perhaps they missed it because it’s gone? New satellite maps show polar ice caps melting at 'unprecedented rate' German researchers have established the height of the Greenland and Antarctic ice caps with greater precision than ever before. 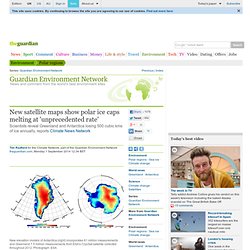 The new maps they have produced show that the ice is melting at an unprecedented rate. The maps, produced with a satellite-mounted instrument, have elevation accuracies to within a few metres. Since Greenland’s ice cap is more than 2,000 metres thick on average, and the Antarctic bedrock supports 61% of the planet’s fresh water, this means that scientists can make more accurate assessments of annual melting. Error identified in satellite record may have overestimated Antarctic sea ice expansion. There has been a lot of attention on ice at the southern pole of the Earth. To be clear, the Earth’s climate is changing and the Earth is getting warmer. This means that the oceans are warming, the atmosphere is warming, sea levels are rising, and ice is melting. In fact, the Earth’s ice is melting almost everywhere. In the Arctic, sea ice is in a long-term retreat, the Greenland ice sheet is melting, so is the Antarctic ice sheet as are the world’s glaciers.

But, there is a perplexing anomaly. There are many hypotheses, and my colleague Dana Nuccitelli has written about this recently, but here I add a few emerging points.