Permaculture Principles - thinking tools for an era of change 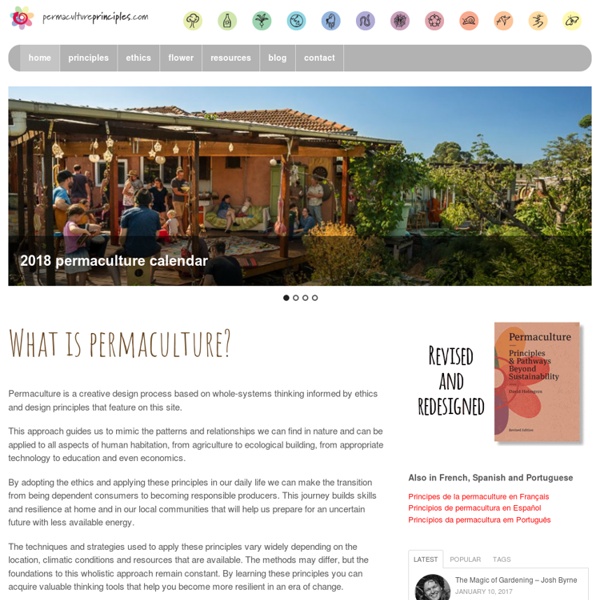 Permaculture is a creative design process that is based on ethics and design principles. It guides us to mimic the patterns and relationships we can find in nature and can be applied to all aspects of human habitation, from agriculture to ecological building, from appropriate technology to education and even economics. By adopting the ethics and applying these principles in our daily life we can make the transition from being dependent consumers to becoming responsible producers. This journey builds skills and resilience at home and in our local communities that will help us prepare for an uncertain future with less available energy. The techniques and strategies used to apply these principles vary widely depending on the location, climatic conditions and resources that are available. The methods may differ, but the foundations to this holistic approach remain constant.

Downloads Current Stable Version The current stable release of GIMP is 2.10.22 (2020-10-04). Pssst... want to check out the GIMP 2.99.4 development release? Re-earth the Cities! Home Page Our Home Planet is in trouble, so what can we do? See You CAN live lightly on the Earth! Why the Cities? No-dig gardening No-dig gardening is a non-cultivation method used by some organic gardeners. The origins of no-dig gardening are unclear, and may be based on pre-industrial or nineteenth-century farming techniques.[1] Masanobu Fukuoka started his pioneering research work in this domain in 1938, and began publishing in the 1970s his Fukuokan philosophy of "Do Nothing Farming", which is now acknowledged by some as the tap root of the Permaculture movement.[2] Two pioneers of the method in the twentieth century included F. C.

» The Quotes of the Civilization V Debut Trailer Games of State Looking at the feedback which is appearing around the internet, it seems that people are questioning whether or not the quotes in the debut trailer for Civilization V are real. I am happy to confirm that all of them are real and listed below for your contextual pleasure, but first lets recap the trailer itself, courtesy of Machinima. In order, the quotes are: A moment comes, which comes but rarely in history, when we step out from the old to the new, when an age ends, and when the soul of a nation, long supressed, finds utterance. - Jawaharlal Nehru Nehru was the first Prime Minister of India and is considered one of the greatest Indian statesman. Along with Mahatma Gandhi, he is considered one of the architects of free India.

About City Farmer Shoemakers, fashion models, computer geeks, politicians, lawyers, teachers, chefs … all city dwellers … all can grow food at home after work in back yards, community gardens or on flat roofs. For the past 36 years, City Farmer has encouraged urban dwellers to pull up a patch of lawn and plant some vegetables, kitchen herbs and fruit. Our message is the same today as it was in 1978 and will be relevant far into the future. This website is a collection of stories about our work at City Farmer here in Vancouver, Canada, and about urban farmers from around the world. Frédérique Gérard , Évaluation des dispositifs d’apprentissage en situation de travail dans les entreprises Currently, in organisations, much attention is given to workplace learning and more specifically, intentional, structured and organised learning on the job. Indeed, this kind of training seems to be more efficient and less expensive than off-the-job training.In our research, we study a specific workplace curriculum which has been developed by Entreprise & Personnel association. The aim of our research is to examine the efficacy of this curriculum.Our theoretical framework draws together the work of Billett (1995, 1996, 2001, 2006) one of leader scholars of the field of Workplace Learning and Pastré (1999, 2005, 2011), one of the key researchers of the francophone field vocational didactic.

Installing a Bee Hive: A Nervous Beginners' Experiences A typical package of bees - Image credit: TheBeeYardHow to Install a Bee Hive: It Really Isn't ScaryI got pretty excited about news that the Obamas were including bee hives in the White House garden. After all, honey bees are one of the most important pollinators for our modern food system (and a great source of, errrm, honey). But many people are still very wary of bees - after all they sting like crazy, right? Well having been preparing for a few weeks now, I finally picked up my first bees over the weekend. I'll be the first to admit that I was more than a little nervous - but those nerves proved unfounded. The experience was a sheer delight and I'd recommend it to anyone.

Farmscaping "Farmscaping" is a holistic approach to pest control on farms that focuses on increasing biodiversity in order to maintain healthy populations of beneficial insects, birds, bats, and other wildlife as part of an ecological pest management program. Farmscaping often treats beneficial wildlife as a kind of "minature livestock" that must be managed and provided for for just like cows, sheep, chickens, and other farm animals. Farmscapers use observation and science to plan hedgerows, flower beds, cover crops, and water reservoirs to favor beneficial wildlife over pests. Benefits of Farmscaping