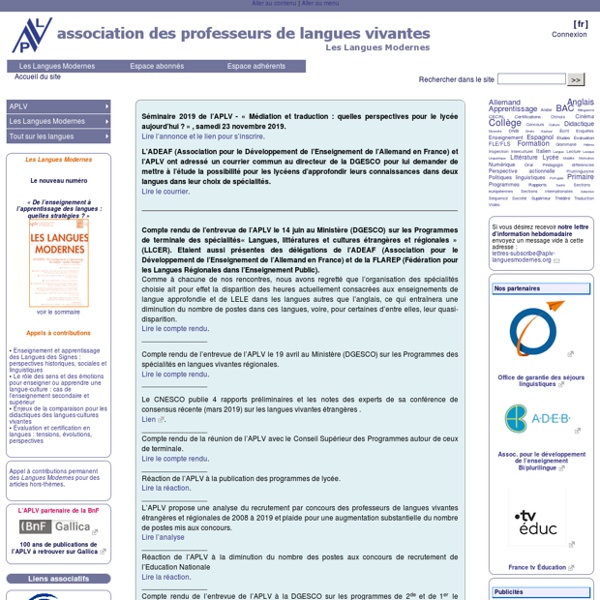 Blow: Venus & Adonis Last updated: Feb. 14, 1997 Go to the Libretto Homepage Music composed by John Blow Libretto anonymous Date of composition: ca. 1682 for the entertainment of King Charles II Goto: DRAMATIS PERSONAE VENUS ADONIS CUPID FIRST SHEPHERD SECOND SHEPHERD SHEPHERDESS HUNTSMAN SHEPHERDS, SHEPHERDESSES, HUNTSMEN AND GRACES LITTLE CUPIDS OVERTURE (Maestoso, Allegro, Tempo Primo) THE PROLOGUE The curtain is drawn where is discovered Cupid with a bow in one hand and an arrow in the other and arrows by his side and around him Shepherds and Shepherdesses.

Council of Europe Language Policy Portal Languages are a fundamental aspect of people’s lives and the democratic functioning of society. In response to the needs identified in or by its member states, the Council of Europe has been working over the past few decades to compile a set of resources made available to education authorities and professionals and benefiting all Europe’s citizens (see milestones). Some of the end products have been widely distributed beyond Europe.

The Lion King and Hamlet: Similarities and Differences Both families are royal families. Simba is the main character in Disney's The Lion King. he is the son of Mufasa, the king of the lions, which makes Simba a prince. Hamlet, from Shakespeare's The Tragedy of Hamlet, Prince of Denmark is the son of the tragically murdered King Hamlet, which makes him a prince too. The uncle characters are very similar. Hamlet: Act 5, Scene 1, Page 8 Let me see. (takes the skull) Alas, poor Yorick! I knew him, Horatio, a fellow of infinite jest, of most excellent fancy. Plans for underwater 'oceanscraper' revealed Indeed, the future of human habitation, whether through choice or catastrophe, is often imagined (in popular culture at least) as being beyond Earth's orbit. Sub-aquatic living still seems, perversely it could be argued, very alien. Not so for Belgian architect Vincent Callebaut. He has revealed ambitious plans for a series of underwater eco-villages that could house up to 20,000 people each in the future. His Aequorea project imagines entirely self-sufficient, spiraling "oceanscrapers" reaching to the sea floor from mangrove-covered marinas on the surface of the world's oceans. Jellyfish-like in appearance, each oceanscraper would be constructed using recycled plastics from the misleadingly named "Seventh Continent", or Great Pacific Garbage Patch (much of the debris here is believed to be in the form of microplastics, rather than a visible mass).

Paris hosts first Arab contemporary art biennial "The attacks in Paris changed what we talk about," says Ella Graf, one of a group of German exchange students at the Institut du Monde Arabe (IMA), one of the Biennial's two principal venues. "Art was already an important part of our stay in Paris but now this exhibit is even more interesting to us, and photography is a great way to access this world." The Biennial of Contemporary Arab World Photography, located principally in the IMA and the Maison Européene de la Photographie (MEP) is showing work by more than 50 artists who have worked in the Arab world since the turn of the millennium. Following the attacks on 13 November in which 130 died, mosques in Europe and the U.S. have been vandalized and many Muslims have feared reprisals.

The Simpsons season 13 free download ←The Simpsons season 12The Simpsons season 14→ 22 episodes (431 views) 8.9(692 votes) If you really want to be green for Earth Hour, go vegan On Saturday 19 March many of us will be turning off the lights for Earth Hour. While this will make for a nice romantic meal, if you truly want to combat climate change, cross off meat, eggs and dairy foods from your shopping list. Foods derived from animals, whether eaten by candlelight or not, require more resources and cause more greenhouse gas emissions than plant-based foods do.

And: a complex little word at the heart of Janet Frame’s language - Angles - Université de Poitiers 1My starting point is the shortest story in The Lagoon and Other Stories, a collection published in 1951 by New Zealand writer Janet Frame. The 337 word-long story is “The Birds Began to Sing” — it can easily be found on the Internet. The following lines are taken from the beginning of the story, and make up approximately one-third of the text: