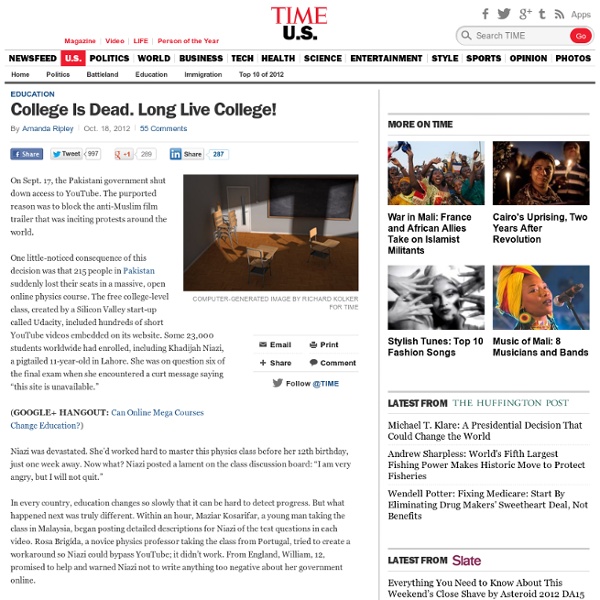 On Sept. 17, the Pakistani government shut down access to YouTube. The purported reason was to block the anti-Muslim film trailer that was inciting protests around the world. One little-noticed consequence of this decision was that 215 people in Pakistan suddenly lost their seats in a massive, open online physics course. The free college-level class, created by a Silicon Valley start-up called Udacity, included hundreds of short YouTube videos embedded on its website. (GOOGLE+ HANGOUT: Can Online Mega Courses Change Education?) Niazi was devastated. In every country, education changes so slowly that it can be hard to detect progress. None of these students had met one another in person. By late that night, the Portuguese professor had successfully downloaded all the videos and then uploaded them to an uncensored photo-sharing site. That same day, Niazi signed up for Computer Science 101 along with her twin brother Muhammad. High-End Learning on the Cheap

A First for Udacity: Transfer Credit at a U.S. University for One of Its Courses - Technology By Katherine Mangan A Colorado university is announcing on Thursday that it will give full transfer credit to students who complete a free introductory computer-science course offered by the online-education start-up company Udacity. The announcement, by Colorado State University-Global Campus, is a milestone for the Stanford University spinoff. This is the first time a university in the United States has offered academic credit for a Udacity course, although several universities in Austria and Germany already do. The course, "Introduction to Computer Science: Building a Search Engine," teaches basic computer-science skills by having students build a Web search engine similar to Google. In order to earn the three transfer credits toward their bachelor's degrees at the Global Campus, students will need a "certificate of accomplishment" from Udacity showing they passed the course. CS101 is Udacity's first course and includes appearances by the company's co-founder, Sebastian Thrun. Mr.

Reliability of Wikipedia The reliability of Wikipedia (primarily of the English-language edition), compared to other encyclopedias and more specialized sources, has been assessed in many ways, including statistically, through comparative review, analysis of the historical patterns, and strengths and weaknesses inherent in the editing process unique to Wikipedia.[1] Wikipedia is open to anonymous and collaborative editing, so assessments of its reliability usually include examination of how quickly false or misleading information is removed. An early study conducted by IBM researchers in 2003—two years following Wikipedia's establishment—found that "vandalism is usually repaired extremely quickly—so quickly that most users will never see its effects"[12] and concluded that Wikipedia had "surprisingly effective self-healing capabilities".[13] A 2007 peer-reviewed study stated that "42% of damage is repaired almost immediately... Wikipedia editing model Areas of reliability Assessments Comparative studies

Professor Leaves Teaching Post at Stanford, Hoping to Reach 500,000 at Online Start-Up - Technology By Nick DeSantis A Stanford University professor who made headlines this past fall by teaching an online artificial-intelligence course to more than 160,000 students has left his teaching post at the university to seek an even bigger audience. The professor, Sebastian Thrun, announced last week that he would teach free online courses through a company he co-founded instead, with the goal of reaching half a million students at once. The leap to the commercial sector may have been his plan all along: He gave up tenure in April to continue working for Google, where he helped create a driverless car. The professor-turned-commercial-educator is now betting that students will try free courses that teach in-demand skills on flexible schedules—even if the courses are not affiliated with a prestigious university, and their work doesn't earn them a degree. Mr. Mr. Starting in late February, Mr. "I think a lot of classroom teaching is empowering the professors," he said. Will Students Come?

Coursera Business model[edit] The contract between Coursera and participating universities contains a "brainstorming" list of ways to generate revenue, including verified certification fees, introducing students to potential employers and recruiters (with student consent), tutoring, sponsorships and tuition fees.[5][6] In September 2013 it announced it had earned $1 million in revenue through verified certificates that authenticate successful course completion.[7] As of December 2013 the company had raised $85 million in venture capital.[8][9] John Doerr suggested that people will pay for "valuable, premium services".[10] Any revenue stream will be divided, with schools receiving a small percentage of revenue and 20% of gross profits.[6][11] In January 2013, Coursera announced that the American Council on Education had approved five courses for college credit.[12] As the journalist Steve Kolowich noted[12] "whether colleges take the council's advice, however, is an open question." Courses[edit]

Open Courses for Free | Open Learning Initiative At Harvard Extension School, free and open learning is hardly a new concept. In fact, the Extension School was founded with this mission in mind: to create an affordable way for any motivated student to take courses at Harvard. We stay true to this mission today, offering several free courses and nearly 800 for-credit courses at reasonable tuition rates. Explore our series of free or low-cost courses below. In addition, you can also browse Harvard University's Digital Learning Portal, which features online learning content from across the University, both free and fee-based options. Video accessibility. Abstract Algebra In these free videotaped lectures, Professor Gross presents an array of algebraic concepts. The Ancient Greek Hero American Poetry from the Mayflower through Emerson Discover how the United States developed its own national literature with Elisa New, Powell M. Watch a video, in which Elisa New discusses the design of the HarvardX course and the topics covered. Bits China

Google Releases Open-Source Online-Education Software - Wired Campus Google has taken what its officials call an “experimental first step” into online education, releasing open-source software called Course Builder in hopes that universities will use it to deliver free online courses. The search giant says it is in talks with edX—a partnership among Harvard University, the Massachusetts Institute of Technology, and the University of California at Berkeley to offer free online courses—though officials declined to comment further. A post on Google’s research blog this week also cited nine universities interested in using the platform, including Stanford University. “We’ve been in touch with a number of universities, and I think it’s a confusing time or an exciting time,” said Peter Norvig, Google’s director of research, in an interview with The Chronicle late Wednesday. “We’re close with Stanford—Coursera and Udacity both came out of Stanford. Mr.

Massive open online course Poster, entitled "MOOC, every letter is negotiable", exploring the meaning of the words "Massive Open Online Course" A massive open online course (MOOC /muːk/) is an online course aimed at unlimited participation and open access via the web.[1] In addition to traditional course materials such as filmed lectures, readings, and problem sets, many MOOCs provide interactive user forums to support community interactions among students, professors, and teaching assistants (TAs). MOOCs are a recent and widely researched development in distance education which were first introduced in 2006 and emerged as a popular mode of learning in 2012.[2][3] Early MOOCs often emphasized open-access features, such as open licensing of content, structure and learning goals, to promote the reuse and remixing of resources. History[edit] What is a MOOC? Precursors[edit] Early approaches[edit] Tabulation of the significant differences between xMOOC and cMOOC.[10] cMOOCs and xMOOCs[edit] Emergence of MOOC providers[edit]

Professors without borders Will online learning spell the end of universities? Stanford University: students from Bakersfield to Bangalore can now take its computer science courses online Primm, Nevada, is a three-casino, one-rollercoaster town in the Mojave Desert, just across the California state line and 40 minutes south of Las Vegas’s shimmering neon. In spring 2005, preparing for that autumn’s Defence Advanced Research Projects Agency (DARPA) Grand Challenge, Sebastian Thrun, a Stanford professor of robotics, and David Stavens, his undergraduate protégé, arrived in the desert for several months of off-road testing. The Grand Challenge called on American university students to build robotic cars and race them, unassisted, across 131 miles of unforgiving desert scrub, over salt flats and down the treacherous Beer Bottle Pass. “We happened to be in the car a lot, doing nothing else but waiting,” Thrun said recently. “I was actually sort of embarrassed, to be honest,” Thrun told me. Evans was sympathetic.