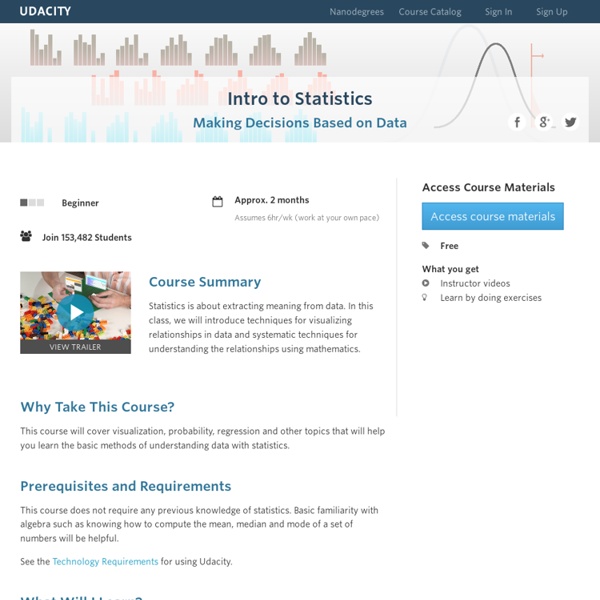 When does the course begin? This class is self paced. You can begin whenever you like and then follow your own pace. It’s a good idea to set goals for yourself to make sure you stick with the course. How long will the course be available? This class will always be available! How do I know if this course is for me? Take a look at the “Class Summary,” “What Should I Know,” and “What Will I Learn” sections above. Can I skip individual videos? Yes! How much does this cost? It’s completely free! What are the rules on collaboration? Collaboration is a great way to learn. Why are there so many questions? Udacity classes are a little different from traditional courses. What should I do while I’m watching the videos? Learn actively! Related:  Education free, public, etc

Metropolis–Hastings algorithm In statistics and in statistical physics, the Metropolis–Hastings algorithm is a Markov chain Monte Carlo (MCMC) method for obtaining a sequence of random samples from a probability distribution for which direct sampling is difficult. This sequence can be used to approximate the distribution (i.e., to generate a histogram), or to compute an integral (such as an expected value). Metropolis–Hastings and other MCMC algorithms are generally used for sampling from multi-dimensional distributions, especially when the number of dimensions is high. For single-dimensional distributions, other methods are usually available (e.g. adaptive rejection sampling) that can directly return independent samples from the distribution, and are free from the problem of auto-correlated samples that is inherent in MCMC methods. History[edit] The algorithm was named after Nicholas Metropolis, who was an author along with Arianna W. Intuition[edit] Metropolis algorithm . ), we will always accept the move. . where to

Introduction to Mathematical Thinking About the Course NOTE: For the Fall 2015 session, the course website will go live at 10:00 AM US-PST on Saturday September 19, two days before the course begins, so you have time to familiarize yourself with the website structure, watch some short introductory videos, and look at some preliminary material. The goal of the course is to help you develop a valuable mental ability – a powerful way of thinking that our ancestors have developed over three thousand years. Mathematical thinking is not the same as doing mathematics – at least not as mathematics is typically presented in our school system. The course is offered in two versions. Course Syllabus Instructor’s welcome and introduction 1. 2. 3. 4. 5. 6. 7. 8. 9. Recommended Background High school mathematics. Suggested Readings There is one reading assignment at the start, providing some motivational background. There is a supplemental reading unit describing elementary set theory for students who are not familiar with the material.

TIL OpenCourseWare movement has been far busier than I expected. There's a huge range of free higher education online. : evolutionReddit Joel Klein, Sal Khan and Sebastian Thrun on Inventing the Future of Education, at Disrupt SF Three trailblazing figures in educational technology are showcasing the future of learning at our upcoming annual conference, Disrupt San Francisco. Former New York education Chancellor, Joel Klein, will get into more of the details about the recently announced Amplify project, News Corp’s ambitious venture to create tailored, digital learning for the American education system. Bill Gates’ “favorite teacher”, Sal Khan, who founded the Youtube-based Khan Academy, will speak about his pioneering work in the “flipped classroom” and launch a new feature to his site. And Google fellow and CEO of Udacity, Sebastian Thrun, will discuss how he opened the walled garden of American higher education free of charge to students around the world. These education leaders will join an all-star lineup at Disrupt SF Sept 8-12, including Yahoo CEO Marissa Mayer, Marc Benioff, Ron Conway, Kevin Rose, Matt Cohler, TechCrunch founder Michael Arrington, Vinod Khosla and many others. In January 2011, Joel I.

How an Olympic flop can inspire innovation - Ask the Fedcoach Posted at 11:32 AM ET, 07/26/2012 Jul 26, 2012 03:32 PM EDT TheWashingtonPost (Andy Lyons - GETTY IMAGES) Are you familiar with the Fosbury Flop? In the 1960s, a track and field athlete named Dick Fosbury developed a new high jump technique because he consistently failed to clear the bar using traditional methods. There are lessons to be learned for federal leaders from Fosbury’s experience. I share this example because my organization, the Partnership for Public Service, and Deloitte derived some similar lessons from our latest Best Places to Work in the Federal Government analysis of innovation in government. Based on our review of the Federal Employee Viewpoint Survey, we found that 92 percent of the respondents were looking for ways to perform their jobs better, but only 59 percent said they were encouraged to come up with new and better ways of doing business. Of course, there are notable exceptions. · Ask your employees for help. · Support employees who generate ideas.

Plan Your Free Online Education at Lifehacker U: Spring Semester 2013 I know several do, and while I can't speak for all of them, the Saylor Foundation — and, full disclosure, I am employed by them — has three courses that carry portable credit recommendations, with more credit pathways in the works. The recommendation requires a proctored online exam, which can range from free to not-very-expensive depending on how you obtain a proctor. Search NCCRS from the homepage, or get in touch! I'm currently taking the Evolution class (and am enrolled for the Sci-fi class mentioned above) through Coursera. Education Portal states on their site that their free programs are designed so you can take a test (all of which run between $75-100) for college credit. Look at Western Governors University, while not free.

Using Asynchronous Methods in ASP.NET 4.5 How Requests Are Processed by the Thread Pool On the web server, the .NET Framework maintains a pool of threads that are used to service ASP.NET requests. When a request arrives, a thread from the pool is dispatched to process that request. If the request is processed synchronously, the thread that processes the request is busy while the request is being processed, and that thread cannot service another request. This might not be a problem, because the thread pool can be made large enough to accommodate many busy threads. However, the number of threads in the thread pool is limited (the default maximum for .NET 4.5 is 5,000). Processing Asynchronous Requests In web applications that see a large number of concurrent requests at start-up or has a bursty load (where concurrency increases suddenly), making web service calls asynchronous will increase the responsiveness of your application. Choosing Synchronous or Asynchronous Methods Few applications require all methods to be asynchronous.