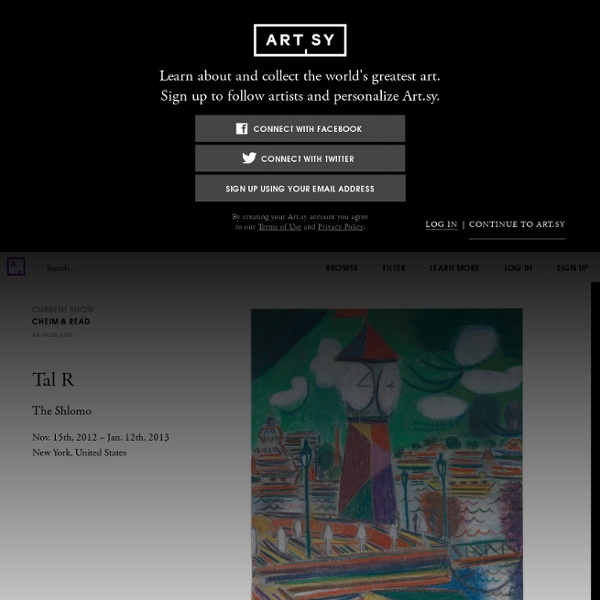 Looking Ahead Our insider's guide to shows, artists, and trends to follow in the new year A renowned Latvian painter, Ella Kruglyanskaya describes her practice as focused on the female figure and its accoutrements. Her work has been shown at Gavin Brown’s Enterprise and Salon 94 over the past couple years, and she will get her London solo debut at Studio Voltaire in April. "A RISD furniture grad from 2011, Misha creates work for a parallel wonderland, where traditional perception of material and structure is pushed to the edges of the room to make space for one big party.

National Gallery of Art NGAkids Collage Machine If the Shockwave program above does not load, download and install the plug-in. Collage Machine is fun for children of all ages. This recently updated and enlarged version incorporates images from Collage Machine I and Collage Machine II. Artigo-Social Image Tagging Goals of ARTigo Art history studies mainly original artworks, but often their reproductions, too. Today, these reproductions exist in substantial electronic repositories sometimes amounting to several million items.

Experts Predict Art Market Trends, Part 4: Tim Blum, Philippe Segalot, Sanford L. Smith, Marc Spiegler This is the fourth of a four-part series from Art+Auction magazine in which key art-market players weigh in on the future of the field. Over the past few years, the attention L.A. receives has been steadily increasing. But in the last three to five months we’ve seen a lot more people. Interieur 2012: Biennale in the City, City in the Biennale The 2012 edition of Interieur—the European Design Biennale taking place in Kortrijk, Belgium, October 20–28—is bound to become one of the top global design destinations this year. Curator and Interieur President Lowie Vermeersch (former head of design at Pininfarina and now CEO of the Turin-based GranStudio), set out to reconnect with Interieur's avant-garde roots through a selection of 300 carefully picked international exhibitors and an extensive cultural program, 'Future Primitives' installations, custom-designed bars and a pop-up 'bistro.' Crucial this year is the expansion beyond the Xpo fairgrounds, into the city center and particularly the Buda Island. Together these expanded locations will establish a new DesignCity with a continuum of lanes, diagonals, piazzas and unexpected places where installations, actions and encounters unfold. The 60 m2 installations will be placed at piazzas created at various locations within the Biennale.

How to edit video with a Chromebook Whoever said you couldn’t do things like video editing on a Chromebook. It’s true that we are limited to awesome programs like Adobe’s suite, but there are replacements that will give casual users a perfectly acceptable experience. Video editing is possible on a Chromebook, and I am about to show you how it can be done. My favorite video editing Chrome app is WeVideo. Qbic -The State Hermitage Museum: Digital Collection Imagine finding a Gauguin masterpiece simply by recalling the organisation of his subjects or locating a Da Vinci painting by searching for its predominant colours. IBM's experimental Query By Image Content (QBIC) search technology offers this unique ability. Search for artwork visually using tools that an artist would use. For an overview of the QBIC searches, take a look at our animated demonstrations. The QBIC Colour Search locates two-dimensional artwork in the Digital Collection that match the colours you specify. You select colours from a spectrum, define proportions, then execute the search.

The First Art Newspaper on the Net The Museum of London said in a statement that this was "the first multidisciplinary study of the inhabitants of a city anywhere in the Roman Empire".© Museum of London. LONDON (AFP).- A DNA analysis of four ancient Roman skeletons found in London shows the first inhabitants of the city were a multi-ethnic mix similar to contemporary Londoners, the Museum of London said on Monday. Two of the skeletons were of people born outside Britain -- one of a man linked genealogically to eastern Europe and the Near East, the other of a teenage girl with blue eyes from north Africa. The injuries to the man's skull suggest that he may have been killed in the city's amphitheatre before his head was dumped into an open pit. Both the man and the girl were suffering from periodontal disease, a type of gum disease.

Homeless Paintings: crowdsourcing the diaspora of Italian renaissance art Amidst the archives that Bernard Berenson bequeathed to Harvard University at his Villa I Tatti in Florence is a collection of 17,000 photographs of Renaissance Italian paintings classified as “homeless”: works that were documented by a photograph but whose location was unknown. In a series of articles that appeared between 1929 and 1932 in the journals International Studio and Dedalo (posthumously collected, updated, and translated from the Italian as Homeless Paintings of the Renaissance, 1969), Berenson published some of his photographs of these artworks with the hope that their owners might come forward and claim them as their own. He intended to use the information offered to bring up to date his continuously revised “Lists” of the works of Italian Painters of the Renaissance, manuals that made available a body of unfamiliar images to a broad public of art lovers, collectors, and scholars.

LA Welcomes Serendip-o-matic to the App Library From the One Week | One Tool Team's August 2, 2013 press release After five days and nights of intense collaboration, the One Week | One Tool digital humanities team has unveiled its web application: Serendip-o-matic < Unlike conventional search tools, this “serendipity engine” takes in any text, such as an article, song lyrics, or a bibliography. It then extracts key terms, delivering similar results from the vast online collections of the Digital Public Library of America, Europeana, and Flickr Commons.