Why are children’s museums museums? – Take 2. Visitor at the Peoria PlayHouse Children’s Museum, during the museum’s first week of operations. 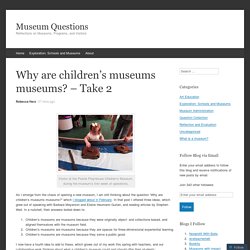 As I emerge from the chaos of opening a new museum, I am still thinking about the question “Why are children’s museums museums?” Which I blogged about in February. In that post I offered three ideas, which grew out of speaking with Barbara Meyerson and Elaine Heumann Gurian, and reading articles by Stephen Weil. In a nutshell, their answers boiled down to: Norfolk Museums Service - Time and Tide. Come and explore this museum housed in a converted Victorian herring curing works and take an exciting journey into the past. 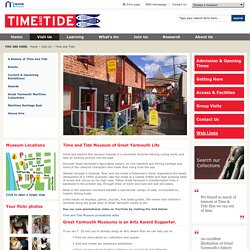 Discover Great Yarmouth's fascinating history, its rich maritime and fishing heritage and some of the colourful characters who made their living from the sea. Wander through a Victorian 'Row' and see inside a fisherman's home. Building the First Slavery Museum in America. Photo Louisiana’s River Road runs northwest from New Orleans to Baton Rouge, its two lanes snaking some 100 miles along the Mississippi and through a contradictory stretch of America. 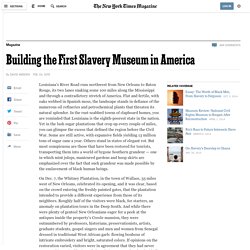 Flat and fertile, with oaks webbed in Spanish moss, the landscape stands in defiance of the numerous oil refineries and petrochemical plants that threaten its natural splendor. Social Justice Alliance for Museums. IMOW Muslima. Visit - Backstreet Museum. Museum of the Moving Image. When Stories Come First – Voices in Museums. The Museum of Broken Relationships was a major stop in my journey. 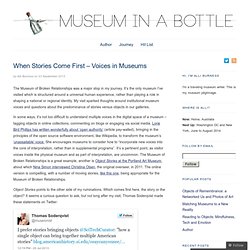 It’s the only museum I’ve visited which is structured around a universal human experience, rather than playing a role in shaping a national or regional identity. My visit sparked thoughts around institutional museum voices and questions about the predominance of stories versus objects in our galleries. In some ways, it’s not too difficult to understand multiple voices in the digital space of a museum – tagging objects in online collections, commenting on blogs or engaging via social media. Lorie Bird Phillips has written wonderfully about ‘open authority’ (article pay-walled), bringing in the principles of the open source software environment, like Wikipedia, to transform the museum’s ‘unassailable’ voice. She encourages museums to consider how to “incorporate new voices into the core of interpretation, rather than in supplemental programs”. Object Stories points to the other side of my ruminations. 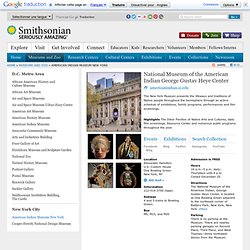 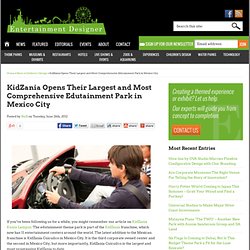 The edutainment theme park is part of the KidZania franchise, which now has 11 entertainment centers around the world. The latest addition to the Mexican franchise is KidZania Cuicuilco in Mexico City. It is the third corporate owned center and the second in Mexico City; but more importantly, KidZania Cuicuilco is the largest and most progressive KidZania to date. To refresh your memory a little, KidZanias feature kid-sized cities where children pretend to be adults. Image: cuicuilco.kidzania.com. Ohio Local History Alliance. Since its founding in 1960, the Ohio Local History Alliance (Alliance) has worked closely with the Ohio Historical Society (OHS). 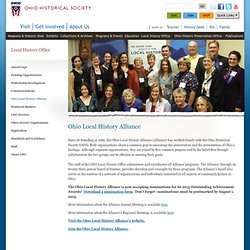 Both organizations share a common goal to encourage the preservation and the presentation of Ohio's heritage. Although separate organizations, they are joined by this common purpose and by the belief that through collaboration the two groups can be effective in meeting their goals. Museum of Visual Materials. Explore. The L.C. Bates Museum: Over a century’s worth of quaint, old and odd. October 9, 2012 FAIRFIELD — After more than a hundred years of hosting an oddball collection of historical artifacts, the L.C. 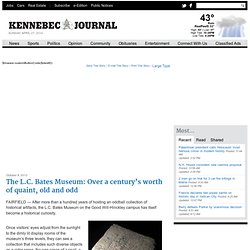 Bates Museum on the Good Will-Hinckley campus has itself become a historical curiosity. click image to enlarge. Proposed Utah museum would allow visitors to experience disasters safely. View 9 photos » In this 1999 file photo, Lori Egly examines the damage a tornado did to her Avenues home. 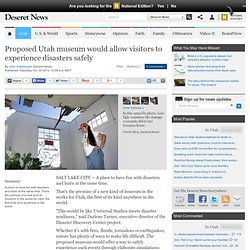 Chuck Wing, Deseret News SALT LAKE CITY — A place to have fun with disasters and learn at the same time. That's the premise of a new kind of museum in the works for Utah, the first of its kind anywhere in the world. "This would be like Universal Studios meets disaster readiness," said Darlene Turner, executive director of the Disaster Discovery Center project. Whether it's with fires, floods, tornadoes or earthquakes, nature has plenty of ways to make life difficult. The goal would be to teach visitors how to deal with a disaster and how to prepare in advance. Topotek 1, B.I.G. Architects, Superflex – Superkilen – Arhitext. Amplasament / Location: Norrebro, Copenhaga (Danemarca) / Copenhagen (Denmark) Design / Planning: 2007 Construcție / Construction: 2011 Suprafață / Size: 39.000 mp / sqm Client / Client: Realdania & the Community of Copenhagen Echipă / Team: TOPOTEK 1, B.I.G. 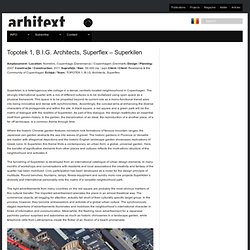 Architects, Superflex Superkilen is a heterogenous site-collage in a dense, centrally located neighbourhood in Copenhagen. The strongly international quarter with a mix of different cultures is to be revitalized using open space as a physical framework. This space is to be propelled beyond its current role as a mono-functional transit area into being innovative and dense with synchronicities.